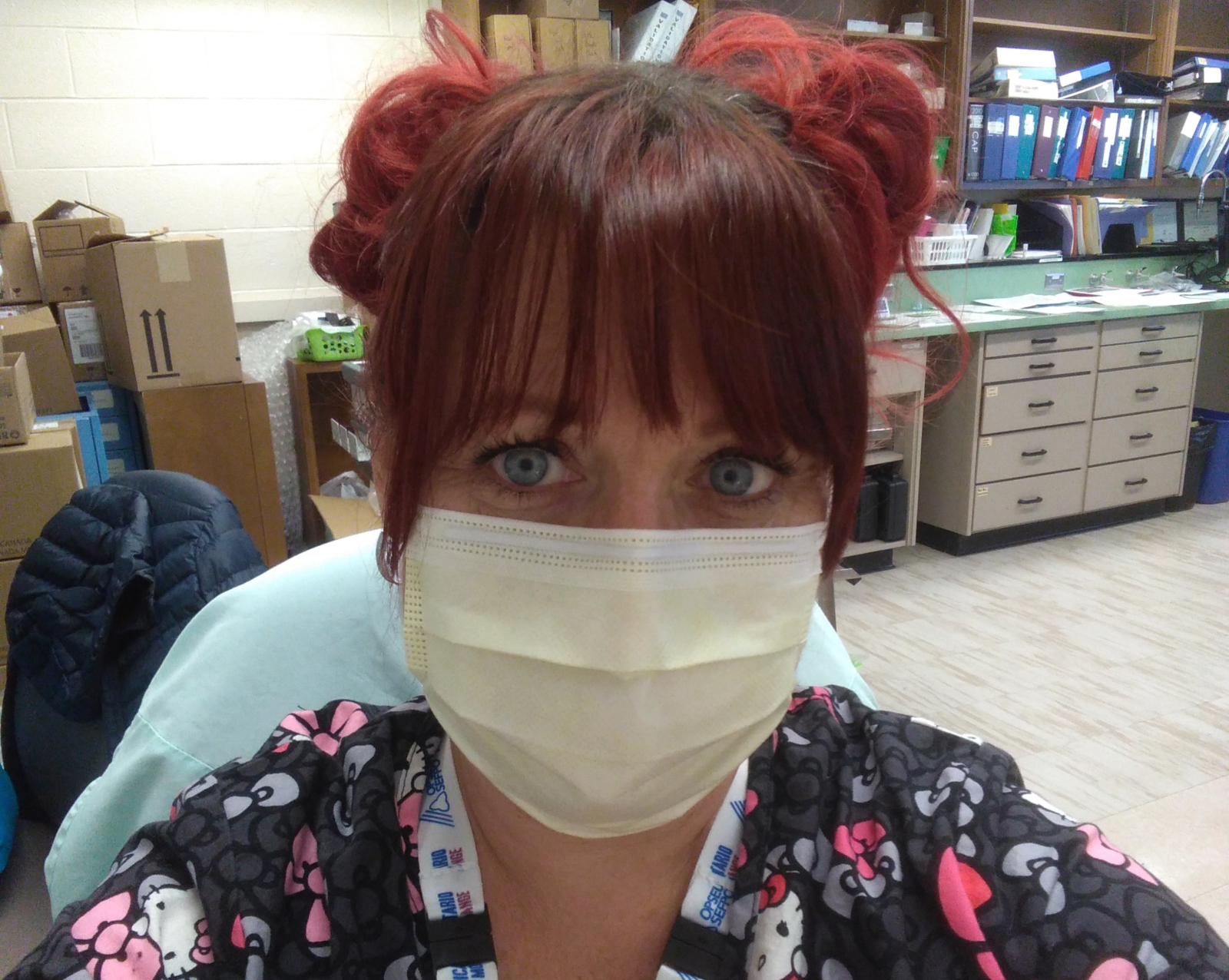 Sara Labelle is one of many medical workers to be left out of Ontario's pandemic pay top-up. Photo courtesy Sara Labelle
Previous story
Next story

Only 6 days day left to reach our goal!

Linda Powers has been on the front line of COVID-19 for months.

Working in an Ottawa hospital, Powers is a physiotherapist who sees some patients who are suspected to be carrying the virus. She’s often up close with patients who are relearning how to walk after being bedridden for long periods of time, and also does chest physiology work to help patients clear their lungs — work that is dangerous and necessary when dealing with a respiratory virus.

“They’re coughing right in your face,” said Powers, who’s at higher risk from COVID-19 because she has asthma. “The secretions are flying everywhere.”

Powers works alongside ⁠— and often does the same procedures ⁠— as medical staff who receive "pandemic pay," a wage top-up for essential front-line workers who deal closely with COVID-19 cases. But she doesn’t.

“I was so emotional, I cried,” Powers said, describing how she felt when she read the province’s list of professions that would receive pandemic pay.

“It was unbelievable, I felt hopeless. … How could we not be on the list? I don’t get it.”

The pandemic pay program is mostly funded by the federal government, with the money distributed by the provinces. In early May, Prime Minister Justin Trudeau said Ottawa had struck a deal with the provinces to contribute $3 billion overall, while the provinces would cover an additional $1 billion, but it’s not clear how much of that money is being spent in Ontario.

Sebastian Skamski, a spokesperson for Ontario Treasury Board president Peter Bethlenfalvy, did not answer questions from National Observer about how much money Ontario is contributing to pandemic pay.

“As Premier (Doug) Ford has said, we wish we could provide pandemic pay to every single front-line worker who has contributed to the fight against COVID-19,” Skamski said, adding that the province appreciates those on the front line.

“Unfortunately, there is a limit to the amount of funding provided by the federal government through our shared agreement and we are not able to expand the pandemic pay program beyond the over 375,000 employees already deemed eligible.”

Ontario’s pandemic pay left out many healthcare workers who are on the frontline of the pandemic. The province won’t explain how it chose who would get the top-up.

Sara Labelle, chair of the hospital professionals division at the Ontario Public Service Employees Union and a medical laboratory technologist in Oshawa, said the province’s current plan creates a two-tiered system where only some work is valued.

“We have people who are having a hard time in the workplace every single day,” she said.

“It makes you sometimes wonder why you selected your career, because you don't get appreciated for the work that you do.”

Powers said it’s not about the money, it’s about showing workers they are valued.

“Here I am coming out of the patient’s room, sweating, face breaking out in acne from the mask I’m wearing,” Powers said.

‘Why have they not asked the right people?’

Ontario workers who are eligible for pandemic pay receive a $4 per hour top-up to their wages. Some also receive a monthly lump sum.

The program helps long-term care workers, who already had notoriously low wages before the pandemic, and those in nursing jobs. It also covers retirement home staff, prison workers and some social services roles.

Elsewhere, provincial pandemic pay lists have been more comprehensive. In British Columbia, for example, the provision extends to cover a broad section of health professions that includes physiotherapists, lab technicians and more.

“Other provinces are recognizing everybody that works in the health-care system,” Labelle said.

So when Ontario released its list in April, there was pushback from unions and other critics. Under pressure, the government released an amended list a few days later that included more jobs, including respiratory therapists, mental health and addictions workers in hospitals and congregate care settings, public health nurses, and paramedics.

Labelle said it looked from the outside as if the government picked a few job titles they were familiar with, but didn’t consult with front-line workers.

“Rather than fixing it, they just made the problem a lot worse,” she said, as some workers wonder why they weren’t important enough to be added.

Powers, too, questioned how Ontario decided on its list.

“They’re so far removed from the front line, they don’t even know who works there and what they do,” she said. “That's fine, they don’t have to. But they can ask people … Why have they not asked the right people?”

When asked how the government determined who would go on the pandemic pay list, Health Minister Christine Elliott’s office redirected to Bethlenfalvy’s office, which did not answer the question. The government also wouldn’t say whether it consulted with hospitals or workers.

Medical workers across the province have protested the list, even as they continue to treat patients. Powers organized one in Ottawa last week.

Labelle and Powers also pointed to some items on the list that they said didn’t make sense.

For instance, social workers in correctional facilities get pandemic pay, but social workers in hospitals don’t. Security staff and auxiliary staff like cooks and porters, who don’t necessarily enter patient rooms, get pandemic pay while physiotherapists who do go in are excluded. And many of the professions that are excluded are female-dominated.

Nobody questions that long-term care workers, in particular, deserve a raise, Labelle said. And hospital workers don’t question that the professions on Ontario’s list deserve a pandemic top-up. But if the province isn’t able to include all hospital workers, it shouldn’t have included them at all, she added.

“If they wanted to make an argument about the money, then they never should have done it to begin with,” Labelle said.

“People just want to be recognized and seen for the value they bring … It’s unfortunate that Doug Ford has attached a dollar amount to that.”

Editor's Note: This story was updated at 11:30 a.m. on June 11, 2020 to correct that Powers is a physiotherapist. National Observer regrets the error.

I wonder if there is, in fact

I wonder if there is, in fact, ANY master list of everyone connected to the health care system in Ontario? Willing to wager that there is not. Also willing to wager that no-one, especially "consumers" (like me) have any idea just how many specialists, professionals, or ordinary un-skilled people are employed in the system.

Given that we still do not have total, definitive answers on just how the Covid 19 virus is transmited, nor the conditions that present the greatest danger of contagion - it seems inevitable that significant errors are being made within the system while we stumble around looking for answers. Despite the fact that progress is being made, the disease continues to spread and the continuing effects of having had the disease continue to unfold.

One has to assume that politicians, bureaucrats and bean counters who are wholly removed from the front-line are the last people who should be making decisions about who gets danger pay, who is eligible for PPE, and all the other "solutions" for the vast array of unknowns this pandemic has unleashed.

am I the only Ontarian

am I the only Ontarian embarrassed by the laggard, lax, and bumbling governance by the Ford cabinet during this pandemic?
Fanatical ideology that "business matters most" seems to have blinded the Fordites to policy based on social need. They cannot connect the dots past A to C and understand that refusing to support vulnerable work sectors like agricultural workers, truckers grocery workers will KEEP INFECTIONS HAPPENING.
Examples of laggard and lax policy would be NOT requiring mask wearing (still not mandated anywhere), encouraging travel during March break, not taking over LTC following BCs lead when outbreaks FIRST occurred, STILL no mandated sick day for (lowest paid) workers, randomly opening up despite high infection rates, lack of transparency around WHY citizens even with symptoms and travel profiles could not get tested for months in Ontario
( could it be previous cuts in funding, staffing, research personnel never owned up to or properly reported in the press). no daycare up and running BEFORE you announce stores and restaurants are to open ( of course those are mostly women's jobs and the Fordites don't seem to acknowledge women as not men in any policy)!

They sure haven't let a crisis stop them from buying gas plants, approving dumps over pure water aquifers in Simcoe county, and ramping up clear cutting protected areas.....