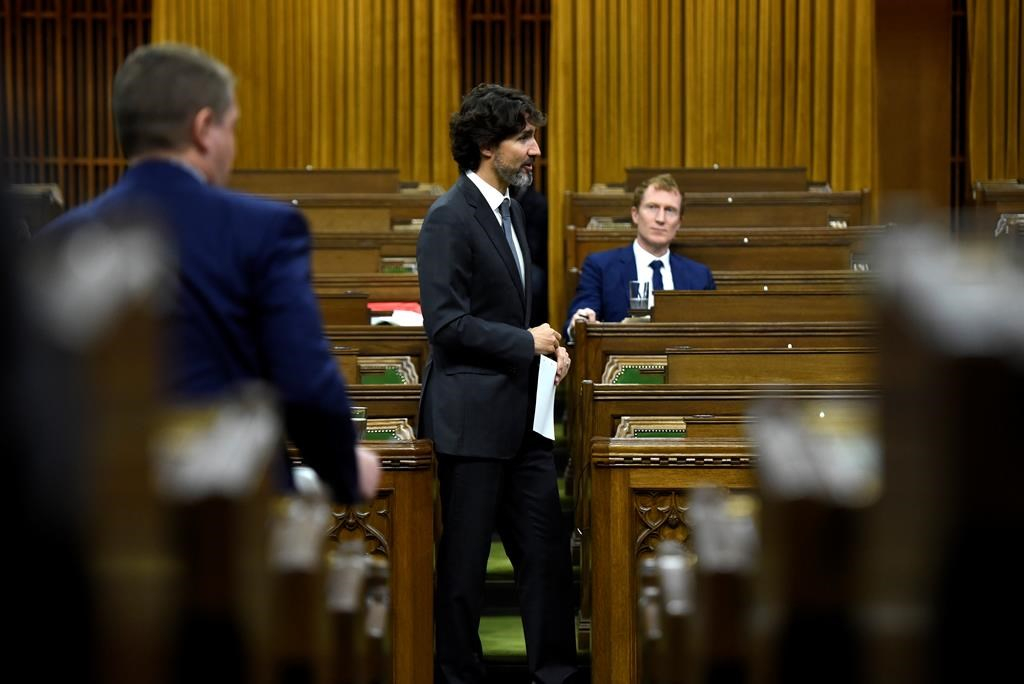 Prime Minister Justin Trudeau rises during a meeting of the Special Committee on the COVID-19 Pandemic in the House of Commons on Parliament Hill in Ottawa, on Tuesday, June 9, 2020. File photo by The Canadian Press/Justin Tang
Previous story
Next story

The non-partisan spirit that has allowed Parliament to swiftly pass emergency legislation during the COVID-19 pandemic evaporated Wednesday, with opposition parties refusing to give unanimous consent to the Trudeau government's latest bill.

The Conservatives then blocked the government's bid to split the bill in two, to allow a promised benefit for Canadians with disabilities to go ahead.

That benefit — a one-time, tax-free payment of up to $600 for Canadians with disabilities — and other measures in the bill are now in limbo, while the parties point fingers at one another over who is to blame.

Government House leader Pablo Rodriguez said he was disappointed that no opposition parties supported the bill but vowed to keep negotiating with them in hopes that a resolution can be found. He conceded, however, that this will delay the disability benefit and other measures.

"I'm not going to quit on this because it's too important," he said in an interview shortly after the bill was rejected in a sitting of the House of Commons that lasted just 15 minutes.

"Canadians need it, people with disabilities need it."

The bill includes a proposed expansion of the wage subsidy program to include seasonal workers and some additional businesses, as well as proposed penalties for fraudulently claiming the Canada Emergency Response Benefit.

The Liberals needed unanimous consent from all MPs in the House of Commons to allow the bill to be debated and passed in a matter of hours, as has been done with four previous pandemic-related bills.

But none of the opposition parties was willing to support the latest bill.

The NDP balked at the prospect of Canadians who fraudulently claim the $2,000-a-month CERB being fined or sent to jail — despite Prime Minister Justin Trudeau's assurances that the punishment is aimed at those who deliberately defraud the government, not those who make honest mistakes.

The non-partisan spirit that has allowed Parliament to swiftly pass emergency legislation during the COVID-19 pandemic evaporated Wednesday, with opposition parties refusing to give unanimous consent to the Trudeau government's latest bill.

New Democrats also wanted a firm commitment that the CERB will be extended and changes to the proposed disability benefit, which they maintained would apply only to 40 per cent of Canadians with disabilities.

The Conservatives held out for a full resumption of Commons business.

And the Bloc Quebecois demanded three conditions be met before it would support the bill: a fiscal update this month, a first ministers' meeting before September on health-care transfers to the provinces and a ban on political parties accessing the wage subsidy to avoid laying off staff.

Rodriguez said "there's been a little bit more politics in the middle of this than before and it's bad because it should be about people, not politics, definitely not partisan politics."

The Bloc's conditions for supporting the bill "have nothing to do with the bill," he noted.

However, Bloc Leader Yves-Francois Blanchet accused the Liberals of playing politics, arguing they're acting like a majority government in trying to force through legislation while not providing transparency about the country's finances.

"The most poisonous pill of all of that is the government trying stubbornly to act as if there were not 338 people having been elected last October and doing as if it was a majority government led by some kind of prince, which is not the case," Blanchet told reporters.

He also accused the Liberals of deliberately including the disability benefit in the bill in order to coerce opposition parties into going along with the controversial fraud penalties. He likened that to "putting cod-liver oil in chocolate cake."

Both Blanchet and NDP Leader Jagmeet Singh suggested the disability benefit should be dealt with separately. But when Rodriguez moved to do just that, the Conservatives refused to give their consent.

Conservative Leader Andrew Scheer instead proposed his own motion to have the House of Commons resume sitting later in the day — and resume business as usual thereafter. The Liberals rejected that.

Rodriguez called Scheer's motion "some kind of procedural trick" that "looked very innocent but was loaded." It would have undone last month's decision, supported by the NDP, to continue with sittings of the special COVID-19 committee that has been acting as a stand-in for the Commons during the pandemic.

What happens to the bill now is not clear.

The Commons is not scheduled to sit again until next Wednesday, when it is supposed to deal with the supplementary estimates — $87 billion in planned government spending, mostly on pandemic-related matters. The bill — or just the disability benefit portion of it — could be added to the agenda but opposition parties have already complained they have too little time to debate the estimates.

Rodriguez said the government can ask that the Commons be recalled at any time. Blanchet called for it to sit on Monday to deal separately with the disability benefit.

The minority Liberals need the support of at least one opposition party to pass any legislation. While New Democrats want amendments to the disability benefit to cover more Canadians, a party spokesman indicated Wednesday that they wouldn't block the government's proposal if it's put in a separate bill.

To deal with such a bill quickly, the Liberals would also need the support of at least one opposition party to shut down debate and bypass the normal, lengthy legislative process.

The current bill includes a provision to allow the Canada Revenue Agency to share information so that the benefit can be delivered to Canadians who are eligible for the disability tax credit. Government officials say a different delivery mechanism can be found if necessary to get that benefit flowing.

The bill also includes changes to the CERB in response to concerns that the benefit is discouraging people from returning to low-paying jobs. People would be cut off if they fail to return to work when "it is reasonable to do so" and their employer has asked them to come back, or if they are able to work but decline a reasonable job offer.

It would also allow people to make claims for the CERB for a two-week period, rather than the current four weeks.

It would also protect Canadians from penalties for missing deadlines in civil legal matters, such as bankruptcy proceedings, due to the pandemic.

This report by The Canadian Press was first published June 10, 2020.