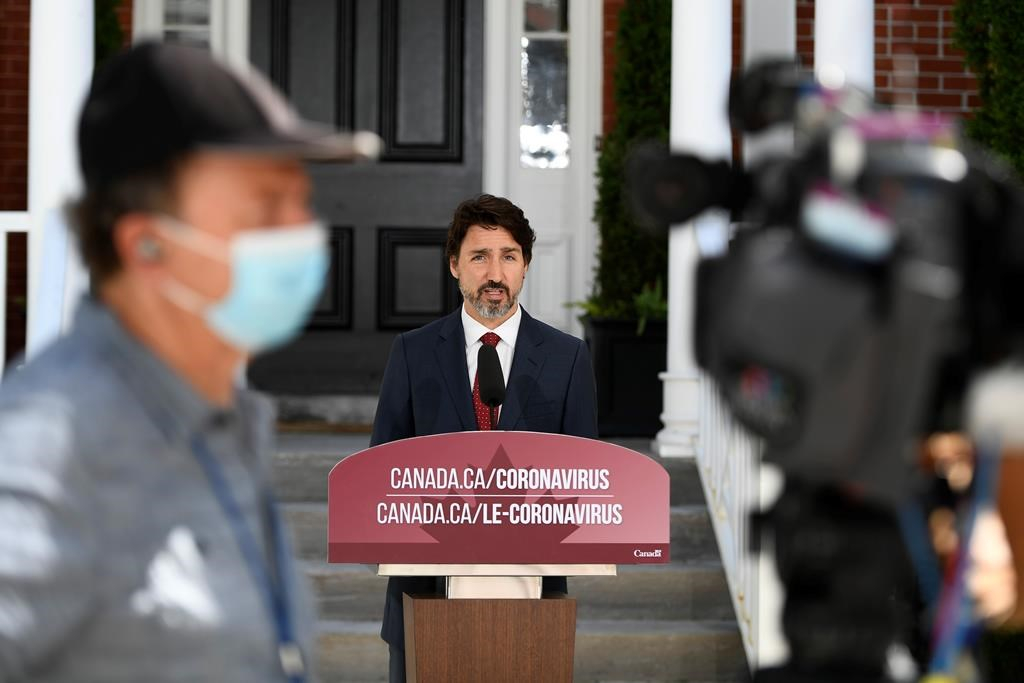 Prime Minister Justin Trudeau speaks during a news conference on the COVID-19 pandemic outside his residence at Rideau Cottage in Ottawa, on Thursday, June 18, 2020. Photo by The Canadian Press/Justin Tang
Previous story

Prime Minister Justin Trudeau will visit a gourmet cafe in Quebec today to underline his plea to small business owners to use the federal wage subsidy program to rehire workers.

But his visit to Biscotti & cie in the village of Chelsea comes at the same time that the federal government is delaying the start-date for another program that was supposed to help small businesses survive the COVID-19 pandemic.

Finance Minister Bill Morneau took to Twitter late Thursday to announce that the promised expansion of the Canada Emergency Business Account to include small owner-operated businesses will not launch today as scheduled.

The CEBA, which provides interest-free, partially forgivable loans of up to $40,000, has been expanded twice to include more businesses.

Several weeks ago, the government announced the program was to be expanded again to include companies with payrolls of less than $20,000 and with non-deferrable expenses, like rent, utilities and property taxes, of between $40,000 and $1.5 million.

The change was intended to cover owner-operated small businesses that had been ineligible for the program due to their small payrolls, sole proprietors who receive business income directly and family-owned operations that pay family members in the form of dividends.

"Work continues around the clock to ensure the program can securely launch across over 230 financial institutions," Morneau tweeted. "We know how important the program is to small businesses & want to launch as quickly as possible."

Trudeau's visit to the Chelsea cafe, just north of Ottawa, is meant to underscore how the 75 per cent wage subsidy can help employers afford to rehire workers now that the economy is starting to slowly reopen after several months of pandemic-induced lockdown.

Biscotti & cie has used the program to hire back dozens of workers at the cafe and its sister operation, the Chelsea Pub.

Prime Minister Justin Trudeau will visit a gourmet cafe in Quebec today, June 19, 2020, to underline his plea to small business owners to use the federal wage subsidy program to rehire workers.

This is the second company Trudeau has visited in as many weeks in a bid to persuade businesses to take advantage of the wage subsidy. He has been almost begging them to use it as the government tries to wean jobless Canadians off the $2,000-a-month Canada Emergency Response Benefit and transition back to work.

The wage subsidy, originally budgeted at $73 billion, has had far less take-up than the federal government had hoped. In the meantime, it has had to almost double the original budget for the CERB to $60 billion.

This report by The Canadian Press was first published June 19, 2020.