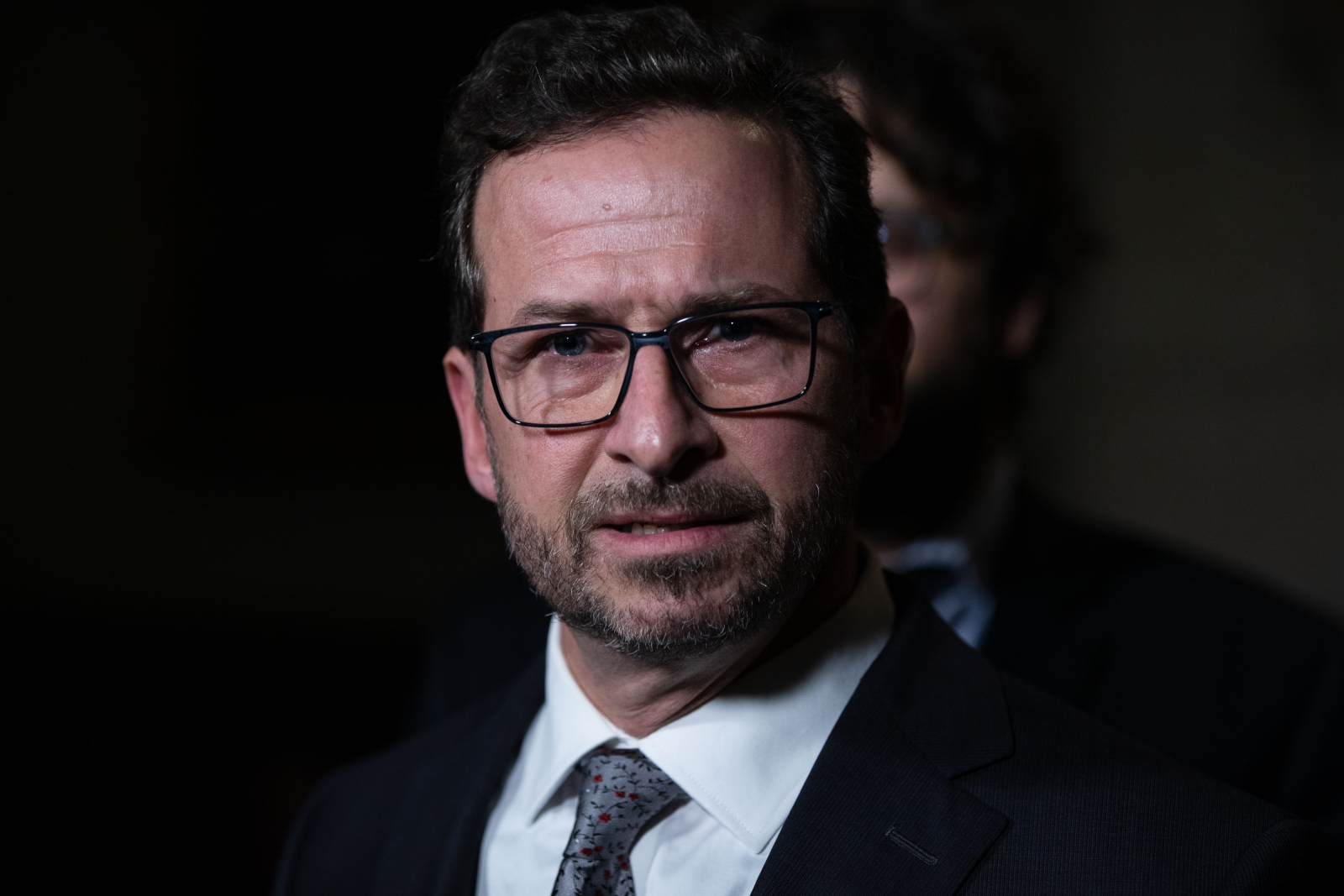 File photo of Bloc Québécois Leader Yves-François Blanchet in 2018. “Systemic racism — I’ve come up with my own definition,” Blanchet told media in French on Parliament Hill on Thursday. Photo by Alex Tétreault
Previous story
Next story

After thousands of Canadians marched in the streets demanding an end to systemic racism, amid repeated displays of deadly or heavy-handed use of force by police, the leader of the Bloc Québécois decided to offer his own definition of the issue.

“Systemic racism — I’ve come up with my own definition. Perhaps I’m a wannabe anthropologist,” Yves-François Blanchet told media in French on Parliament Hill.

Blanchet said he believed in the notion of systemic racism, and called it “a residual effect that is found in some institutions, and results in conduct in those institutions” — but added he felt “a distinction needs to be drawn.”

While “there are individuals that are racist,” Blanchet argued, “one should avoid saying that all individuals in that particular group are racist.”

If someone “fully, deeply believes that systemic racism does not exist within our institutions,” he said, “it does not mean that that person is a racist.”

People have asked what happened in the House today.

Here are my thoughts. pic.twitter.com/VV8hX5Tq0u

This month, Canadians joined protests and vigils in many cities calling for an end to systemic racism and discrimination that is rooted in Canada’s history, laws, cultures and institutions.

The Parliamentary Black Caucus released a statement this week discussing the “systemic and insidious nature of racism in our country,” from “daily microaggressions to the rarer, but tragically fatal, hate-filled acts,” and called on Canada to enact urgent reforms.

Former governor general Michaëlle Jean has also said racism against Black and Indigenous people is deeply embedded in institutions, while the Canadian Human Rights Commission said “the roots of anti-Black racism and systemic discrimination in Canada run deep” and are “built into our institutions, and perpetuate the social and economic disparities that exist in everything from education to health care to housing and employment.”

Blanchet was responding to a question about systemic racism after one of his MPs, Alain Therrien, made a gesture at NDP Leader Jagmeet Singh during Wednesday’s parliamentary proceedings.

Singh, the MP for Burnaby South, would later describe the gesture as a racist brush-off of his concerns about police brutality and discrimination. But he was punished for calling out the gesture by being tossed out of the House of Commons.

After thousands of Canadians marched in the streets demanding an end to systemic racism, amid repeated displays of deadly or heavy-handed use of force by police, the leader of the Bloc Québécois decided to offer his own definition of the issue.

Therrien was not present at Thursday’s press conference, and Blanchet attempted to dismiss the gesture as too vague to mean anything specific.

“How could someone interpret, or imagine the way someone looks at somebody else, or a gesture, which nobody seems to remember?” he said. “Who is entitled to say, ‘Oh, he moved his hand in such a way, and this means this or that?'”

Therrien’s gesture was not caught on House of Commons cameras, but Singh said it came when Therrien voted “no” on his motion to study the issue of systemic racism in the RCMP.

Singh’s motion followed weeks of reports of killings and displays of force by police forces.

A recently released dashcam video of the RCMP’s arrest in March of Athabasca Chipewyan First Nation Chief Allan Adam, for example, showed an Alberta officer slamming his body into Adam at high speed and putting him into a chokehold.

Then there were the police shootings in New Brunswick. Rodney Levi from Metepenagiag Mi’kmaq Nation was killed June 12 after police appeared at a barbecue, a shooting that was less than two weeks after police shot Chantel Moore from Tla-o-qui-aht First Nation following a “wellness check.”

Those came after the death of Regis Korchinski-Paquet in May in Toronto, after police became involved, and the police killing of Stewart Kevin Andrews in Winnipeg in April.

The RCMP says it stands against all forms of racism and discrimination. But RCMP Commissioner Brenda Lucki has faced calls to resign after she initially said she was “struggling” with the term systemic racism — before saying later in a statement that she should have said it did exist.

Singh’s motion asked MPs to agree that there was systemic racism in the RCMP, and for police to make de-escalation a priority and review its use-of-force tactics. It also would look at the RCMP budget to see if funding can be directed to health care instead.

Blanchet said the Bloc voted against the motion because the party was already supporting a committee’s study of racism in the RCMP and “we can’t come to conclusions ahead of time.”

The Bloc leader is trying to

The Bloc leader is trying to shroud racist acts with institutional rules. Sounds like systemic racism to me.

The failure of the Bloc to

The failure of the Bloc to whip M.Therrien exposes their acceptance of his racist behaviour. I think that reveals institutional racism.

The Premiers explanation does

The Premiers explanation does not come close to explaining System Racism. His comments are off the mark.
On TVO The Agenda Thursday evening lead a discussion titled "Urban Design is not Neutral" with three panelists. It dealt with racism and offers suggestions on how we might correct it. It is worth the time to view same.
In my view it sheds new light on racism and how it affects minorities in our communities. The topic discussion is to broad for me to relate it here.

Bottom line we have a long way to go in changing the way people view racism.

I don't think the protests

I don't think the protests are about systematic racism in general, although many will attempt to co-opt the protests to that end. It is police use of excessive and inappropriate force against blacks, sometimes even resulting in murder, that is being protested.
If we can focus on fixing this problem it will go a long way to improving many lives and make society better, even though not addressing all of the racial discrimination unfairness.

I'm not sure you can tackle

I'm not sure you can tackle the problem of police use of excessive and inappropriate force against Black people, or against Indigenous people, without dealing with systematic racism. There are all sorts of training and codes of behaviour in police forces, including the RCMP -- and that is all to the good -- but excessive and inappropriate force continues. In the heat of the moment, police can treat racialized groups differently because of unconscious assumptions and biases and because of the way the Mounties do their policing.

The problem with a broader

The problem with a broader issue is that it is always possible to define a broader issue, so the talk goes on forever and action never starts. Stiick with the issue of excessive and inappropriate force used by police in dealing with black people, and we may be able to take action. An improvement on this issue will spill over to benefit many others.

Amen. And because there is

Amen. And because there is no proscription against racist behaviour in all the many small and not small ways that many have experienced or witnessed, repeatedly.
I do think there needs to be made a distinction between "being a racist" and commiting a seemingly race-based singular comment. And yes, I'm fully aware of the horrid BS around "religious objects" ... and expect I'm not the only one to grin inwardly at the irony of government workers potentially being required to cover their faces, for their co-workers' protection.

Maybe that white guy in

Maybe that white guy in authority should shut up and let victims and experts figure out what's systemic racism.

Good point Rufus Polson, If it is Trudeau you're referring to, most definitely, to him any comment against a minister or his policies, he calls it racist. Victims and racially affected people are the best place to start. Maybe the white guy will eventually listen to what is being said.

Wannabe Anthropologist sounds a trifle off-kilter to me. Bloc Quebec party members are implicitly racist in nature - seeking to preserve the pur laine, white hegenomy in La Belle Province. This is the raison d'etre of the Party. They are denying the unalterable fact of North and South America's racist origins - founded on the genocides of the indigenous inhabitants (ongoing) and the importation of enslaved captive Africans to make their economic exploitative existence possible.

It is an ongoing existential dilemma for Quebec. In order to sustain the French speaking poulation it has, with great reluctance and distate resorted to permitting the immigration of new Franco linguistic miorities. They are participating and extending the dismal French colonial era by exploiting these French speaking but clearly non european immigrants and they naturally fall into the hold-their-nose stance of accepting their labour but NOT their full citizenship. Therein lies the systemic racism. This comment is not meant to blacken the reputations of all Quebecers - many of whom accept and champion minorities. But they are not yet, perhaps, the majority.

On the other hand theirs are not the only sins. All across Canada the original genocidal sin has left its ugly stain on this mosaic of a nation. The mosaic has been built without the acknowledgement of the waste bits littering the floor - our shattered First Nations. It also hides the role of African slavery in Canada. as well as our historic "White Europeans only" national policies/politics which is by no means dead as the Proud Boys and their ilk, will attest.

All those, politicians or not, who resist the notion of systemic Canadian Racism - display their ignorance of history and their total failure of inclusion for people of colour.

white male dismisses dismissive gesture of other white male to a non- white visible minority man as "did not happen" and / or means nothing. Hmmm.
I believe rule one of communication classes explain that 90% of communication is in body language, tone of voice and gesture.
rule two is: The target /recipient of a micro aggression / intended message is the only one who gets to say if it hurts.
rule three is if you aren't actively anti racist; your action is racist.

That whole scene with Singh Therrien and the speaker discipling SINGH NOT THERRIEN, could be dropped right into a stage play and the audience would understand what was really going on. Textbook ex of structural racism at work. #thisishowracismworks