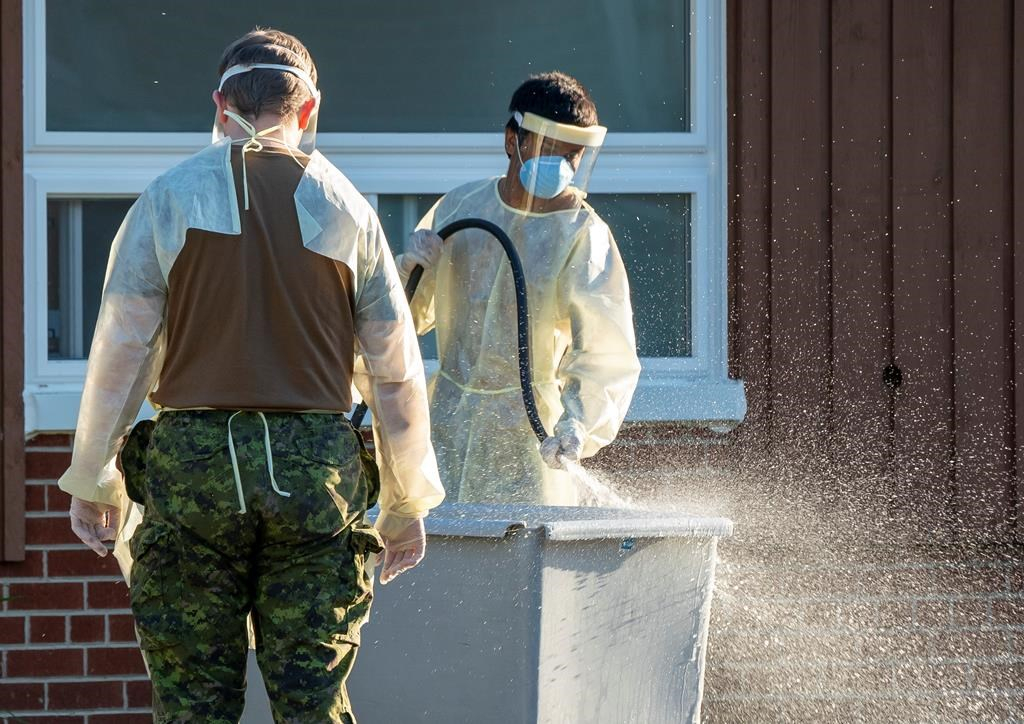 Members of the Canadian Forces assisting with COVID-19 care wash down a laundry bin in the parking lot of Altamont Care Community in Toronto on Monday, June 15, 2020. File photo by The Canadian Press/Frank Gunn
Previous story

Ontario drivers are being told to stay on the lookout for military vehicles on the roads this week as hundreds of Canadian Armed Forces members deployed to long-term care facilities in the Greater Toronto Area begin to pack up and head home.

Around 500 military members and their associated equipment were gathered at Canadian Forces Base Borden north of Toronto in early April to support the federal government's response to COVID-19 as the pandemic spread across the country.

Many of those troops ended up being deployed to seven long-term care homes in the GTA hit hard by COVID-19, where they found cases of abuse and negligence as well as bug infestations, bleeding infections and residents being left crying for help for hours.

Their observations were compiled into a damning report released last month that has sparked several lawsuits as well as calls for an overhaul of how Ontario's long-term care homes are managed.

Troops remained in two long-term care homes on Sunday and won't formally wrap up their mission until Friday, but the military says hundreds of others who have completed their mission will hit the roads and return home on Monday and Thursday.

"Despite very challenging circumstances, CAF personnel and civilian staff have made an important impact and set the conditions for success in these facilities," the Department of National Defence said in a statement to The Canadian Press.

"The overall number of new cases is decreasing, and conditions — including hygiene, staffing, and access to personal protective equipment — are improving for residents and staff."

It was not immediately clear whether similar moves would be made in Quebec this week, where the military has deployed more than 1,000 troops to help in 47 long-term care facilities since April. Like in Ontario, their mission is set to end on Friday.

The Armed Forces were first put on high alert because of COVID-19 in late March as military commanders prepared to respond to requests for assistance from federal and provincial authorities in relation to the pandemic as well as floods and wildfires.

While those natural disasters have not materialized in any significant way, the military did end up mobilizing Ranger units in several northern communities before deploying into the long-term care facilities in Ontario and Quebec.

The deployment involved most of the Armed Forces' medical personnel. Quebec Premier Francois Legault had indicated he wanted to the military to stay in the homes until September, but military officials subsequently warned that was not sustainable.

Ontario drivers are being told to stay on the lookout for military vehicles on the roads this week as hundreds of Canadian Armed Forces members deployed to long-term care facilities in the Greater Toronto Area begin to pack up and head home.

The military did indicate that the returning troops will remain ready to respond to future requests for assistance.

This report by The Canadian Press was first published June 21, 2020.

By The Canadian Press | News, Politics | May 29th 2020
Coronavirus in Canada