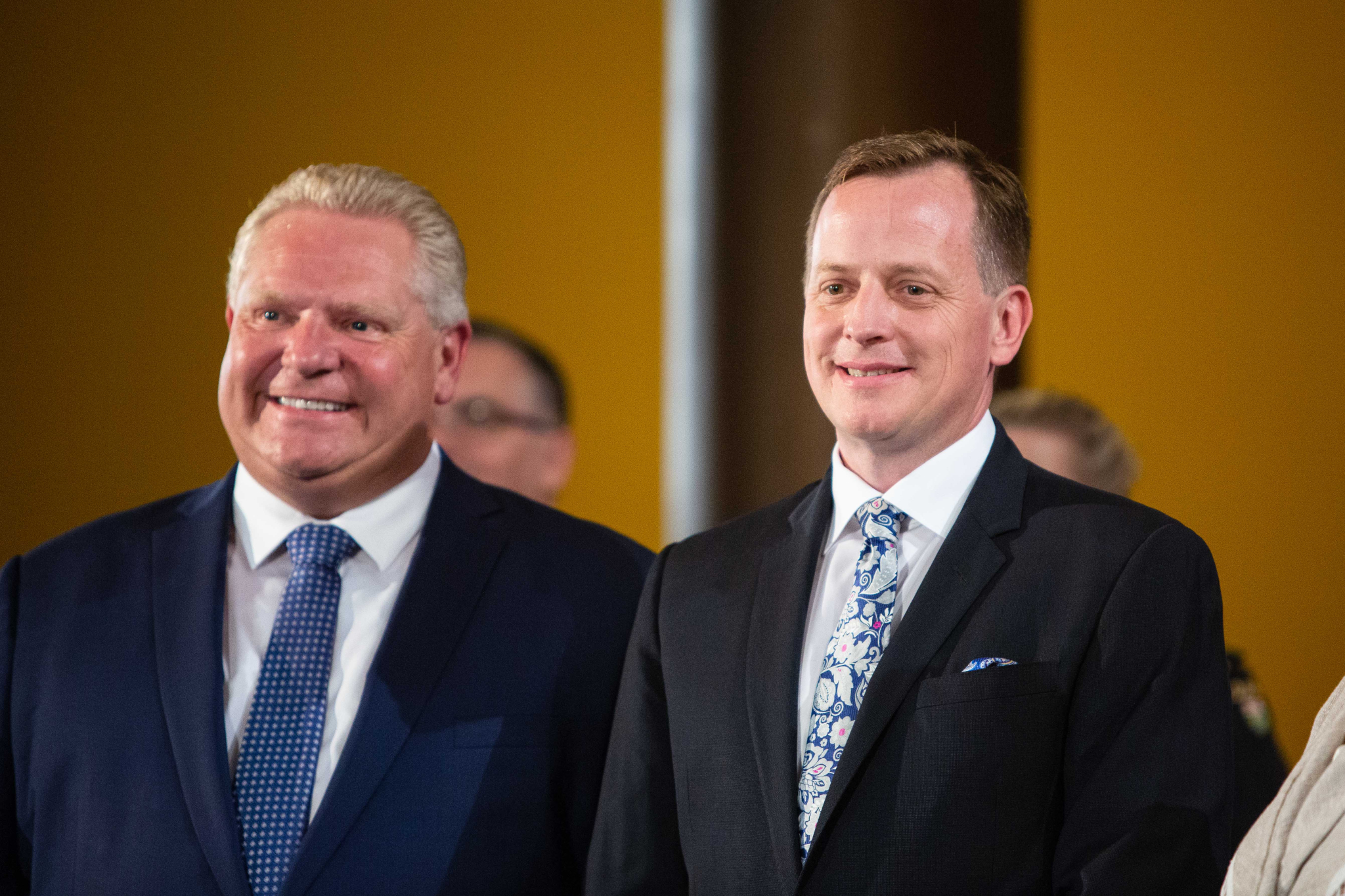 While the Progressive Conservative government said the changes are aimed at speeding up the approval process for small, environmentally insignificant projects, critics sounded alarms, saying the proposed legislation could undermine environmental oversight.

“We aren’t going to dodge (environmental assessments) or anything,” Ford told reporters last week, soon after the proposed changes were made public.

Ford cited the case of an unspecified company that he said took a $500-million project to Ohio instead. (The premier’s office didn’t answer questions about the company and the project, and National Observer could not independently verify what Ford was referring to.)

An environmental assessment is meant to find out if a project might have negative impacts on the surrounding environment. They’re often pivotal, guiding governments and the public as the province decides whether key projects should proceed.

And on this much, Ford and green advocates agree: Ontario’s existing system is deeply flawed.

But the premier and his critics also have very different ideas about what’s wrong with environmental assessments. Ford says they are too slow, driving away important business that’s crucial as we recover from COVID-19. And in that spirit, he said, the government is doing its best to remove barriers to speed the process up.

Environmental law experts, meanwhile, say the system needs more oversight and support, and is slow for reasons that have nothing to do with how the rules are written.

“That to me is a red herring,” said Laura Bowman, a staff lawyer with environmental law non-profit Ecojustice, referring to the premier’s argument.

Environmental assessments are often a major factor in deciding which projects get approved. Critics say the Ontario's planned changes to that system could undermine environmental oversight, and maybe even slow down the system. #onpoli

“What causes a delay is proponents not wanting to spend the money to do the analysis on controversial pieces of the project.”

The office of Ontario Environment Minister Jeff Yurek didn’t respond to requests for an interview from National Observer.

In an emailed statement, Ministry of the Environment, Conservation and Parks spokesperson Gary Wheeler said the government is trying to build crucial infrastructure projects faster to boost the economy, but still protect the environment.

“Our government is proposing sensible, practical solutions that support both a healthy environment and a healthy economy,” Wheeler said.

“We are proposing to update the almost 50-year-old environmental assessment program to support strong environmental oversight and a strong economy.”

Despite criticism from opposition parties, the measures are likely to pass, as the governing Progressive Conservatives holds a majority.

Here’s what @fordnation and @SteveClarkPC had to say today about proposed changes to how Ontario conducts environmental assessments, part of the omnibus economic recovery bill introduced today. #onpoli pic.twitter.com/vb9Qk8w3QG

How environmental assessments are changing

The COVID-19 Recovery Act is 188 pages, and would alter 20 different pieces of existing legislation. Changes to the Environmental Assessment Act alone span 75 pages — many of the measures were laid out last year in a government discussion paper.

One of the largest proposed tweaks to the Environmental Assessment Act would fundamentally change how the law is applied, said Rick Lindgren, a staff lawyer with the Canadian Environmental Law Centre. Instead of requiring assessments for public-sector projects by default (private-sector projects are usually exempt) as the regime is currently set up, the changes would mean projects only need a full assessment if designated by the minister.

The government is working on a ‘project list’ to identify what will require an assessment. It’s not clear what will be on it, but Municipal Affairs Minister Steve Clark has said the province will look to exempt projects with a low impact on the environment.

The lack of specificity in the proposed legislation means it could be a lengthy and contentious process to figure out what’s on the list, Lindgren said. The federal government underwent a similar process, which wasn’t exactly smooth, he added.

“It becomes a wrestling match,” he said. “Everyone wants to avoid environmental assessments like the plague.”

The Ontario government said it is aligning its process with Ottawa, and with several other provinces that have a similar system.

“What we’re doing is nothing new,” Wheeler said.

“If the legislation is passed, the project list will be developed in consultation with the public, Indigenous communities and stakeholders to ensure that projects that have the most impact to our environment will require an assessment, while exempting or streamlining low-impact projects, such as installing traffic lights, so they can proceed without unnecessary delay.”

Under the current rules, citizens have the right to ask the environment minister to require a project to undergo a full environmental assessment, even if it’s exempt or falls under a streamlined process. Ford’s rewrite of the law would remove that mechanism, with an exception for situations that involve treaty rights.

“If you’re just concerned this project is going to do something to the environment and there’s no treaty rights issue, forget it,” Bowman said. “Big picture, the removal of the appeal right is definitely another attack on public participation on environmental decisions.”

Other changes in Ford’s proposed rewrite could be good, given a few adjustments, Lindgren said. For instance, the changes would make environmental approvals expire after 10 years if the project proponents don’t use them — that’s a good step, Lindgren said, although CELA would prefer it be three years because of how quickly Ontario communities are changing.

Ford says overall, the changes could cut the time needed for environmental assessments in half.

Ecojustice's Bowman said she thinks the proposed rewrite could make environmental assessments more contentious and slow things down even more.

Measures aimed at imposing deadlines for completing environmental assessments could lead to rush jobs that leave citizens in the dark, Bowman said. And citizens can only appeal through the courts, that could cause more delays, she added.


In response to questions about whether the changes could slow down the process, Wheeler said the government is “committed to building a strong environmental assessment program.”

“We are looking to find efficiencies in the (environmental assessment) process, eliminate duplication with other planning and approvals processes, while ensuring appropriate consultation occurs, and that the protection of the environment remains a priority,” he said.

‘Ontario is already way behind everyone else’

Ford isn’t the first to critique the environmental assessment system. Ontario auditor general Bonnie Lysyk has also called for the process to be modernized, writing in 2016 that several aspects of it are deeply flawed, but for very different reasons.

The fact that Ontario doesn’t automatically require environmental assessments for private-sector projects puts it out of step with many jurisdictions, Lysyk noted.

“Impacts (from private-sector projects like mines) can be extensive and can affect Ontarians for many years,” she wrote. “For example, as of March 31, 2015, the government identified that it had a liability of $1.2 billion to clean up 47 contaminated sites that were caused by mining in Ontario over the years.”

Even government projects often don’t get full environmental assessments, Lysyk found. The legislation leaves a lot for ministries to interpret, and other rules undermine it by exempting certain types of public projects.

Lysyk also flagged a series of other problems: delays by the Environment Ministry, lack of oversight for projects that fall under a streamlined assessment system, little public information, no consideration for the cumulative effects of several projects in one area and a lack of field inspections to confirm that projects go according to plan.

Over the years, successive governments have also moved more and more projects under the class environmental assessment system, which uses more self-assessments and is less intensive, Bowman said.

“Ontario is already way behind everyone else,” she said.

“Not only do we have weak coverage to begin with… we also have exempted, weakened, undermined and streamlined a large number of public sector assessments we've been doing, over time.”

Environmental groups have raised concerns for years, said the Canadian Environmental Law Centre's Lindgren. They’ve also pushed for some older measures to be brought back — for example, citizen groups used to be able to apply for intervener funding from the government to hire their own experts and level the playing field, a mechanism that expired in the 1990s and was never renewed.

Ford’s reforms to environmental assessments don’t fix any of those problems, Lindgren said.

“It goes in the opposite direction,” he added.

Wheeler said that while intervener funding isn’t part of the proposed changes, the “ministry will update the Consultation Codes of Practice and other guidance documents to ensure that expectations are clearly outlined to promote meaningful consultation with the public, Indigenous Peoples and stakeholders.”

In that case, residents fought the project for years, demanding a health study over concerns that waste could leach into groundwater and harm local farmland. The environmental assessment didn't address the citizens' concerns directly.

Ideally, Bowman said, environmental assessments give more information to the public and can improve projects, preventing irreversible damage. She pointed to the Duffin Creek sewage treatment facility in Pickering, Ont. — citizen feedback led to key adjustments after an expansion of operations there.

“Without assessment, citizens don't know what projects are happening,” she said. “They won’t know what the potential environmental impacts might be. We won’t have the analysis we need to avoid costly mistakes.”

Eliminating measures that allow for oversight will be harmful to the environment and people.