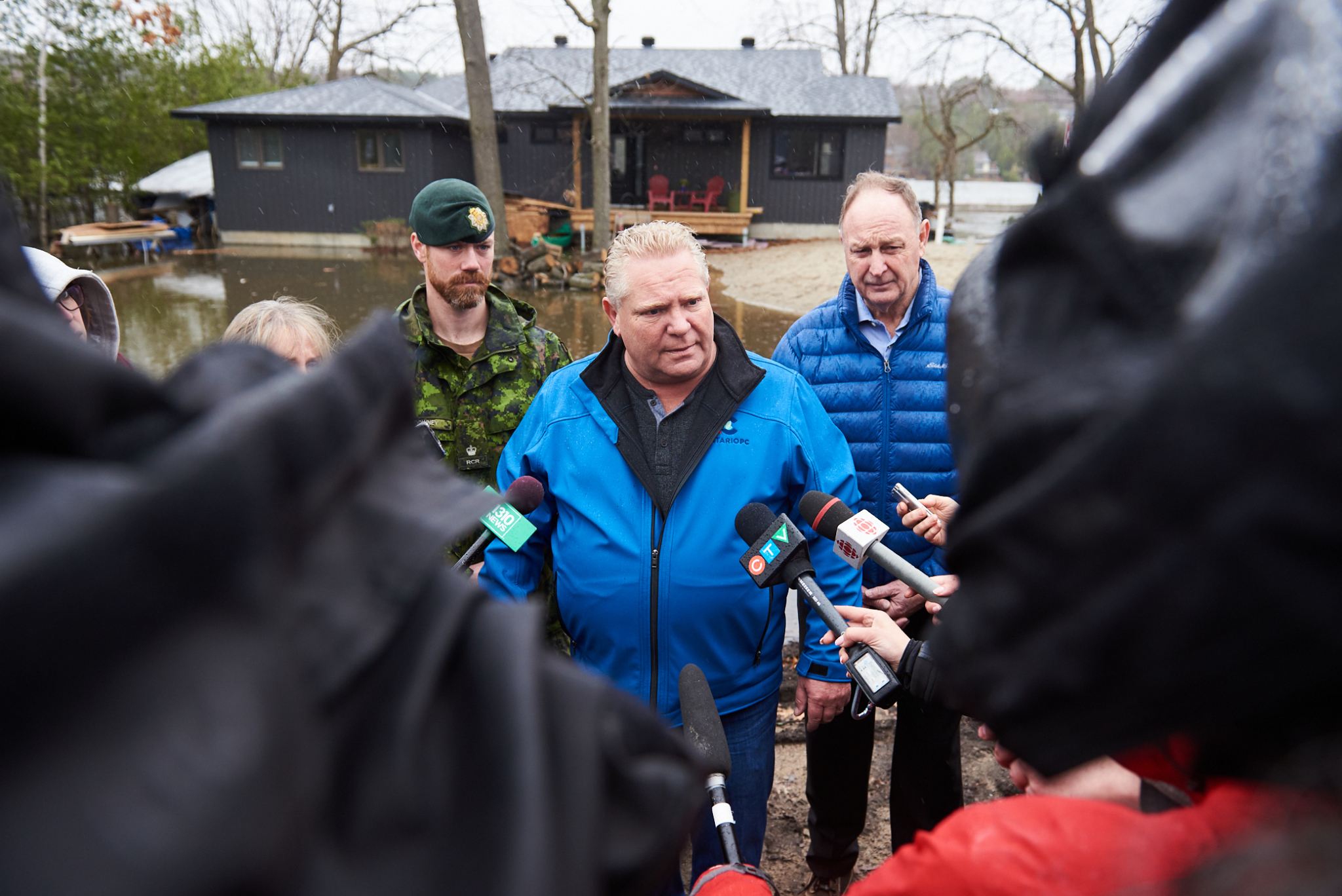 At the beginning of 2020, things weren’t looking great for Ontario Premier Doug Ford.

His approval ratings had plummeted amid a cascade of cuts and axed environmental policies. And in the 19 months since he took office, public priorities had shifted: A growing majority of voters were making climate action a priority, with analysts saying Ford didn’t have a chance at winning a second term unless he could present a meaningful climate plan.

But that was before COVID-19. Now, as Ford marks two years in office this week, the premier is at the helm of Ontario’s response to the pandemic. Despite several high-profile mistakes — an issue-plagued testing program and horrific conditions inside infected long-term care homes, for example — Ford has been widely praised for his handling of the crisis.

“People are looking at Doug Ford today under the lens of COVID, and they like what they see,” said Ihor Korbabicz, executive director of the polling firm Abacus Data.

But that lift appears to be driven mainly by COVID-19, Korbabicz said, which means the Ford government’s climate problem could resurface as the crisis subsides. The difference now, he added, is the Progressive Conservative government has accumulated a great deal of “potentially-fleeting” public trust.

“Unless you go out and squander that, there’s a lot you can do with that political capital,” Korbabicz said.

“If (Ford) developed some sort of comprehensive climate policy, there would be a lot more goodwill from folks across the political spectrum who may have been more skeptical.”

Whether Ford will utilize that opportunity, however, is a different question.

At the beginning of 2020, voters were increasingly turning away from the Ontario government’s lack of climate action. But now, as Doug Ford marks two years as premier this week, COVID-19 has changed everything. #onpoli

A spokesperson for Ford’s Environment Minister Jeff Yurek didn’t respond to questions from Canada’s National Observer about whether the government is rewriting its climate plan, which auditor general Bonnie Lysyk slammed for being “not based on sound evidence.” (In December, Yurek said it was an evolving draft.)

The PCs have embraced science in tackling COVID-19, an approach the government could easily apply to the climate crisis, said Sarah Buchanan, who manages the clean energy program at green non-profit Environmental Defence. But in other ways, the province’s recent moves to suspend environmental accountability measures amid the pandemic and roll back endangered species protections are “trickles of the same old Ford,” she added.

“I think what they need to remember is, particularly on climate, the old ways weren’t working,” she said. “They were getting a ton of pushback and people were angry… That’s not going to go away.”

Ford campaigned on promises to axe Ontario’s existing climate policies and cut red tape in an effort to boost business.

Ford cancelled the previous government’s climate plan, replacing it with one that critics said would do little to reduce Ontario’s climate impact. (It’s made very little progress on the scant plan since publishing it, Buchanan said.)

The government also gutted the powers of Ontario’s environmental commissioner, a watchdog meant to hold the government accountable.

Late last year, Yurek cancelled a partially built wind farm in eastern Ontario. He was rebuked in May by Ontario Superior Court judges, who found his decision did not “meet the requirements of transparency, justification and intelligibility.”

As COVID-19 took hold in Ontario, Ford’s government suspended environmental oversight requirements, even as green advocates warned that doing so could undermine public health efforts. Higher levels of air pollution could cause higher rates of heart and lung disease that put the public at higher risk from respiratory viruses like COVID-19, critics said.

Reducing environmental protections was exactly what Ford promised on the campaign trail, said Andrea Olive, an associate professor of political science and geography at the University of Toronto Mississauga who studies conservation policy.

“There are lots of conservatives who care about the environment. Ford is definitely not that kind,” she said.

“I think the guy has been really frank about which values he supports… Everything he’s done has always really been around the economy and around jobs and around short-term economic benefit.”

But at least up until COVID-19, Ford’s actions on that file and others didn’t go over well with voters.

“The PCs got into power and they didn’t have a great first year,” Korbabicz said.

Ford’s popularity dropped. Last June, a year after his election, he was booed at the Toronto Raptors’ victory celebration in downtown Toronto. By December 2019, almost a quarter of those who voted PC had a negative impression of the premier, Abacus found.

Speaking to reporters last Friday, Ford acknowledged that the past two years had been turbulent at times.

“Anyone who says they don’t make mistakes or (face) bumps in the road would be lying to you,” he said.

“There’re always areas to grow into the position. I think our government has, as a whole.”

‘We’re hoping for the best and expecting the worst’

What happens next will depend on dozens of factors, all of which are up in the air as the COVID-19 pandemic rages on.

Coronavirus has killed nearly 2,700 people in Ontario and has ground the province’s economy to a halt. Over a million jobs have been lost.

“My main focus right now ... is COVID and the health and well-being of the people of Ontario,” Ford said Friday.

It’s hard to know where the public is with environmental priorities right now, said Olive. For one thing, Ontario is entering an unprecedented economic crisis — and when that happens, she added, voters are usually willing to sacrifice the environment for short-term financial gains. Though Canadians and Ontarians voted mainly for parties with climate plans in the federal election, that was during a moment where Canada’s economy was relatively strong.

On the other hand, polling shows Ontarians do want their government to have a credible climate plan. Once the COVID-19 crisis subsides, Ford’s newfound halo “is going to wear off eventually,” Korbabicz said.

“(Environmental policy) matters a little less in the context of this crisis, but it does matter overall,” he added.

The climate movement has started to align with income inequality and racial justice issues that have come to the forefront amid COVID-19, which could be helpful for building political coalitions in future elections, said Jessica Green, an associate professor of political science at the University of Toronto who studies climate governance.

But it’s too early to know how the chips will fall, she added. All that’s clear now, she added, is that the “smooth sailing of a liberal democratic order is over,” and Ontario will have to make tough choices in the days ahead.

“These are the conditions under which we are most likely to see radical change,” Green said. “Those changes could be good, or they could be bad.”

Environmental advocates are pushing for economic stimulus plans in Ontario and elsewhere to be used to boost climate measures and green technology. Yurek’s office didn’t respond to questions about whether the government’s eventual economic restart plan will include green recovery measures, but based on Ford’s track record and the actions of his peers, it doesn’t seem particularly likely.

“We’re hoping for the best and expecting the worst,” Buchanan said.

“I think there’s been a permanent shift in how we see complex issues (like climate). But I think it depends on the government and how they act on that.”

The REAL conservative way would be creating economic recovery and sound economic management through investing in green infrastructure and retraining of fossil workers-- which i is exactly what the IMF and World bank are saying is the way forward.
Massive short term fossil projects will be obsolete before they are built. ( Tmx for instance)
TOTAL WASTE of our money and through investment banks at high interest rather than government bonds no doubt. PROFIT OVER PEOPLE at work through CONS as always
onlybright spot is people under forty will be main voting block and they are not distracted from understanding big fossil and its minions are the death of us all