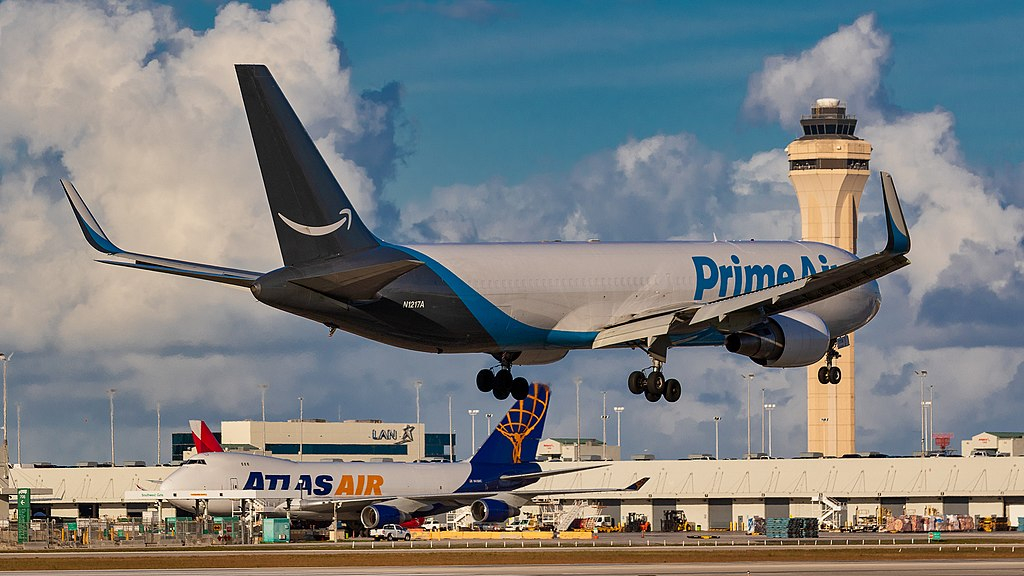 Amazon’s fleet of aircraft, which is soon to surpass 80 Boeings, enables the e-commerce giant to deliver everything from dog food to Dysons within two days. It’s an impressive logistical feat, but it comes with a heavy carbon footprint — and is particularly conspicuous given the company’s recent pledge to achieve net-zero emissions by 2040.

To start to address the issue, Amazon Air announced on Wednesday that it will buy up to 6 million gallons of sustainable aviation fuel, which it says will reduce its aircrafts’ emissions by 20 percent.

While the purchase is a small step that won’t substantially reduce the company’s overall carbon footprint, it may help boost demand for alternative fuels, which are currently too expensive to be competitive with conventional jet fuel.

What makes Amazon’s sustainable aviation fuel (SAF) “sustainable” is not necessarily that it produces fewer carbon emissions than conventional jet fuel when it’s burned in an airplane — it’s that it has a smaller carbon footprint when the entire life cycle of the fuel is taken into account. (In addition, many SAFs burn more cleanly, spewing less soot and other pollutants from a plane’s engine.)

SAFs can be made from a number materials, like various plant oils and crops like poplar and switchgrass. Many of the SAFs under development are made from reusable waste products, like used cooking oil, animal fat, municipal solid waste, and corn leaves, stalks, and cobs. Amazon plans to use a blend of jet fuel and SAF derived from animal fats and oils, produced by the fuel company World Energy.

To assess the emissions reductions claimed by Amazon’s SAF, you need to assess every step of its life cycle, compared to that of conventional jet fuel.

Jet fuel starts as crude oil in the ground. It has to be pumped, shipped, or sent via pipeline to a refinery, where it is refined and then shipped again to the airport before it’s burned in an engine. The process for Amazon’s SAF, on the other hand, involves growing and delivering food for livestock, feeding and processing the animals, delivering the fat to a refiner and refining it, getting the fuel to the airport, and burning it in the plane. By saying that this fuel will reduce emissions by 20 percent, Amazon and World Energy are essentially claiming that this whole chain of events generates 20 percent fewer emissions than the one for the crude oil the company would have used instead.

Today, SAFs are deep in the “valley of death” that frustrates many new energy technologies, she said. Sustainable fuels tend to be more expensive than conventional jet fuel, and investors don’t want to support the innovations that could bring prices down until there’s a bigger market. Some state and federal incentives exist to lower the price, but they still don’t make the price of SAFs competitive with conventional jet fuel, which is especially cheap at present due to the economic slowdown caused by the COVID-19 pandemic.

Amazon Air announced on Wednesday that it will buy up to 6 million gallons of sustainable aviation fuel, which it says will reduce its aircrafts’ emissions by 20 percent.

Petsonk said Amazon’s purchase will help demonstrate that SAFs work and that major companies are willing to pay a premium for them. Her team calculated that switching from conventional jet fuel to the new fuel could reduce the company’s emissions by about 12,000 metric tonnes of CO2. (Achieving this reduction could be jeopardized if production of the fuel has indirect climate impacts, such as causing other companies that use animal fat to switch to palm oil, thereby contributing to deforestation.)

Given that Amazon’s 2019 self-reported carbon footprint was more than 50 million metric tonnes, a 12,000 metric tonne reduction is a drop in the bucket. But at this point, the options to reduce aviation-related emissions are still relatively limited. There are other SAFs that boast larger carbon reductions, but they are still in the early stages of development. The Illinois-based biotech startup LanzaTech is one of the leaders in the space. It produces a form of sustainable ethanol for jet fuel by capturing the emissions from steel mills. Another company, Velocys, is building a plant in the U.K. to supply British Airways with jet fuel made from household waste that would otherwise go to a landfill. Both companies boast a 70 percent reduction in greenhouse gases compared to conventional jet fuel.

Right now SAFs make up just a fraction of a percent of the fuels burned in airplanes, Petsonk said. But with governments around the world excusing the industry from its emissions reduction goals, Amazon’s adoption of sustainable fuel does move the needle, however slightly.

This is another false

This is another false greenwash. Even using plants cuts into Nature's Half, which is needed for sustainability, but supporting the meat industry is ten times worse. I boycott Amazon, and you can too.

This is disappointing journalism. It doesn't even scratch the surface of the arguments and evidence that "sustainable" jet fuel is not sustainable. (a) The achieving life cycle GHG reductions from a fuel product like this is problematic and (b) subject to a lot of uncertainties, hype and scam. (c) What about the other environmental harm of producing this product? (d) Can production realistically be scaled up to displace enough jet fuel to mitigate climate change? (e) What about the simplest, most reliable way to reduce jet fuel use: fly less? The National Observer should do better.

PART A:
Next thing you know, Amazon'll be single-handedly saving the North by capturing polar bears while they're still fat, rendering them down and thus "causing less strain on the northern eco-systems."

That's the kind of blathering hogwash the hype about burning beef fat is. Last time I saw animal fat burned, the amount of soot was extraordinary.

And ten to one, they're not counting any production costs at all, other than refining, and probably calculating on the basis of reclaimed waste. I say that because by now we should all have the measure of Amazon.

And why is Amazon being even *allowed* to take on a chunk of energy supply as well? Why are they not being required to break down into unrelated companies?

Chances are, they're getting subsidies to do it, too.

PART B
What is the relative carbon cost of riding a bus (where that's a possibility), taking a train, or flying, or driving? What's the carbon cost per travel mile, or travel dollar? (Assume lowest financial cost for each category.) It's an important consideration, since there are now many communities that have airports, but very poor train service if any, and no buses.

PART C
People need a way to get around for necessary travel. Funerals and weddings and introducing children to grandparents, etc. But total agreement that no one needs to fly as much as some people do.

During the pandemic I have

During the pandemic I have learned to order books online from locally or regionally-owned bookstores, who then use Canada Post for shipping. Munro's in Victoria is a treasured favourite, and they have had (or could quickly obtain) every title my family has supplied. What's more, most bookstores can deliver regionally through land transport as quickly as Amazon, but even when they can't, what's an extra day or two wait?

Many stores selling all kinds of goods now accept orders online for pick-up or are open with physical distancing measures in place. This is a great time to support our neighbourhood and city economies and get some exercise while doing it. Moreover, contrary to popular belief, it's a very good time to appreciate walkable neighbourhoods, or what they can promise to transition the suburbs into self-sustaining, less car-dependent economies. Local farming at the edges of our cities is another field ripe to bear fruit for cities, so to speak.

Think globally, act locally. Where have we read that before?

"Fly less" strikes me as the

"Fly less" strikes me as the best plan . . . up to a point. Just as "use fewer cars, more mass transit" is a good plan, up to a point. The point where it stops being useful is that we want zero emissions, not fewer emissions, and neither "fly not at all" nor "use zero cars" (and trucks, industrial vehicles etc) seem like plausible goals. So even if we're reducing flight and cars, we still need both flying and cars that will have zero-emission lifecycles.
This is possible. Zero-POLLUTION, no, but zero carbon emission should be do-able. So for instance, with electric cars we have emissions associated with combustion-based power plants, and with manufacturing that requires the use of fossil fuels for both the manufacturing process itself, mining raw materials, and transport. But if we completely phase out combustion-based electrical power, and we electrify the manufacturing, mining and transport, all those emissions go away (although it all still pollutes).
With flight, the same manufacturing issues have the same solutions. But there is currently no way to do mass-sized flight using batteries. So it needs fuel. These plant-based solutions are fake. But there is one approach that is being tried which is not fake: Using electricity to make fuel, much they way they use electricity to make hydrogen for hydrogen-powered cars, except that you're breaking up both water and CO2. There's an article here:
https://www.bbc.com/news/business-49725741
Note that I think hydrogen powered cars are a dead end, a kludge to use electrical power indirectly when using it directly with batteries works better. But in the case of flight, batteries aren't currently an option except for a very few limited cases. Using electrical energy to create fuel takes as much CO2 out of the air as burning it puts in, so it's a genuine zero-emission technology. The downside, it's very expensive--and even if the technology comes into use and therefore scales up, it will probably still be pretty expensive, and require a lot of electrical power. But, well, so we'll fly less.

Carbon emissions don't include only time-of-burning.
They are transported and that has a carbon cost, no matter how that's done.
There are the initial extraction costs, when no one's talking about what happens to the methane released from the wells themselves. But then again, that's never entered the "official" computations, has it.