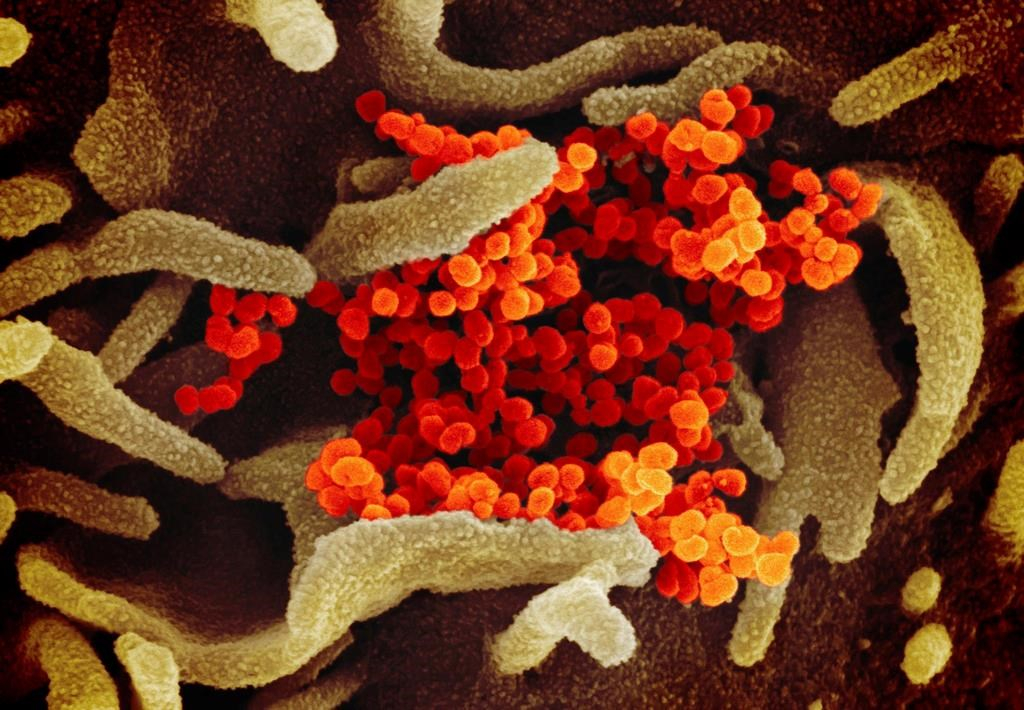 This undated electron microscope image made available by the U.S. National Institutes of Health in Feb. 2020 shows the Novel Coronavirus SARS-CoV-2, orange, emerging from the surface of cells, green, cultured in the lab. Filephoto (NIAID-RML via AP)
Previous story
Next story

COVID-19 has spread to Hutterite colonies in all three Prairie provinces, with five new cases of the virus reported Friday in one Manitoba community.

It did not name the colony but said it is in the Interlake-Eastern health region, which covers a large area north and east of Winnipeg.

None of the five people is in hospital.

The Hutterian Safety Council — a volunteer group of spiritual leaders, first responders and educators — is working with public health officials to ensure their response is culturally sensitive.

The council said in a news release that positive cases were identified in Manitoba colonies as of Sunday.

The group said neither it, nor the government, are publicly identifying the colonies affected "because this easily leads to unnecessary stigmatization."

Hutterites are Anabaptist religious groups who live communally in rural colonies across the Canadian and U.S. Prairies.

The safety council acknowledged in a news release that the Hutterite communal lifestyle "has certain vulnerabilities in regard to viral spread."

"It has always been the expectation that, as Manitoba began reopening, cases of COVID-19 would appear in Hutterite communities. Many communities diligently protected their most vulnerable citizens, and this continues," it said in a release.

"The Hutterite way of life may be vulnerable to viruses, but it is also highly adaptable and our members are eager to care for the sick and prevent further spread."

COVID-19 has spread to Hutterite colonies in all three Prairie provinces, with five new cases of the virus reported on Friday, July 17, 2020, in one Manitoba community.

In a message to Manitoba community members this week, the council urged them to co-operate with health officials and "resist the temptation to hide cases or possible contacts."

It said colonies with confirmed cases should only permit essential travel.

"There is no benefit in blaming or shaming people who test positive. We are called to care for and support each other."

The council said there is no indication that the Manitoba cases were linked to a funeral held recently for three teens from the Spring Valley Hutterite Colony in southern Alberta who drowned last month.

The council said in a July 8 bulletin that "multiple communities" in Saskatchewan and Alberta have been "severely hit" by COVID-19 and that many cases were linked "to a large funeral a few weeks ago."

It said that there was initial resistance to provincial authorities, but co-operation was improving.

Saskatchewan Health Authority CEO Scott Livingstone said the vast majority were in Hutterite colonies in the province's southwest and west-central regions, but there were also some unrelated cases reported in those areas.

He said health officials are only visiting the colonies when invited, then going door-to-door to spread public health messages.

Colonies have been working hard throughout the pandemic to stem the spread of the virus, Livingstone added.

Alberta Health spokesman Tom McMillan said affected colonies in that province are not being identified to protect confidentiality. Provincial health officials are also not disclosing how many community members have been tested positive.

"As with any other community, Alberta Health Services works closely with both cases and contacts, as well as community leaders, to implement public health measures and stop further spread."

McMillan said members of colonies with even one case are being placed under 14-day isolation requirements in order to balance maintaining confidentiality and ensuring no one outside the community is put at risk.

"It is critical that we avoid stigmatizing any one group or part of our society," he said. "Cases continue to be identified in every region in the province and we’re all in this together."

—with files from Steve Lambert in Winnipeg

This report by The Canadian Press was first published July 17, 2020