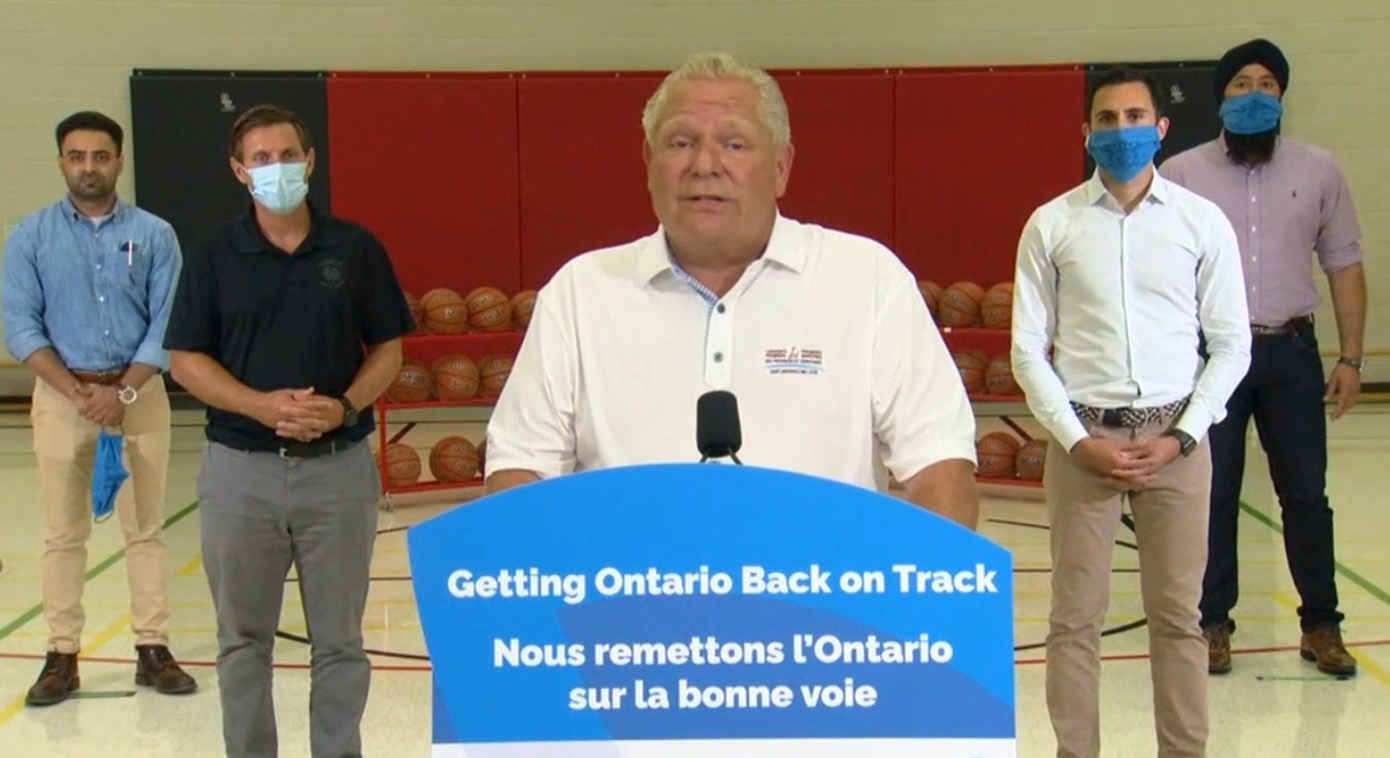 The Ford government will unveil detailed plans, protocols and more investments to ensure the safe return of students to Ontario’s schools next week, the province’s education minister said Thursday, despite telling school boards they had until Aug. 4 to weigh in.

The government has faced months of complaints from parents and teachers left largely in the dark about what school will look like in September in light of the risks presented by the COVID-19 pandemic.

Parents of school-age children in Ontario have struggled to balance working from home (if they kept their jobs) and child care for months, with recent reopening moves adding to the number of parents torn between returning to their jobs and looking after their children.

“We intend to announce a plan for the safe resumption to class that will be equipped with strong health and safety measures in short order,” Education Minister Stephen Lecce said. “We are finalizing those plans with the chief medical officer of health, and we'll share more details about that plan, that protocol, and those investments next week.”

Lecce and Premier Doug Ford both said the changing reality of the pandemic meant the province had to maintain flexibility in terms of how to deliver the 2020-21 school year’s curriculum, but that they wanted to see students in class full-time if it is safe to do so.

When the education minister announced in May that schools would remain shut for the rest of the school year, he said the province would make its plans for reopening school public before the end of the school year.

But the government last month put the onus on individual school boards to fill in the province’s broad back-to-school outline, asking them to come up with plans for full-day classes, fully-remote learning, and a hybrid model while leaving many questions unanswered.

The province’s school boards have been asked to submit their final reopening plans to the ministry by Aug. 4.

“I don’t understand,” tweeted Toronto District School Board (TDSB) trustee Shelley Laskin. “Our recommendations are not due until August 4?”

Not only is it not new funding, where is the list of what is being funded? So frustrating... @tdsb, like all other boards can only ask for 10 projects in priority from a Board perspective... https://t.co/U3EiZp4Jg5

The education minister's comments came at an event to announce the allocation of $500 million in infrastructure funding this year to build 30 new schools, expand 15 existing schools and create nearly 900 new affordable child-care spaces in schools, part of a 10-year, $12-billion infrastructure spending plan.

Ontario's parents and teachers will next week find out more about the plans (and the funding to make it happen) that @fordnation and @sflecce have made for schools to reopen in September.

The government expects the spending to create 25,000 more student spaces by 2023. Lecce said more than 330 school and child-care projects are in either the planning or construction stage currently, with 90 expected to open in September.

“The investments we make today will set our students down the path to lifelong success,” Ford said at the event in Brampton, a fast-growing city outside Toronto that will get two new schools from the deal.

But Laskin said the funding had already been set aside and was not new, echoing education advocacy group, Fix Our Schools, which said the funding was inadequate for the state of school disrepair.

“There is a $16.3-billion repair backlog in Ontario schools,” the group tweeted. “Leaking roofs, windows that don't open, broken HVAC systems, broken elevators, lead in drinking water, missing washroom doors, not enough sinks. Not items you want to see outstanding during a pandemic.”

While the government has asked boards to prepare plans, it has provided scant guidance regarding the amount of money that would be made available to deliver on them.

In a planning document released last week, the TDSB said it would need to hire nearly 2,500 more teachers at a cost of almost $250 million if elementary students return to class for five full days a week in cohorts of 15 with one teacher delivering their entire curriculum.

But the Progressive Conservatives is offering less, leading critics worry that a lack of funding to deal with the pandemic will expose teachers and students to a heightened risk.

The TDSB is getting $55 million more in funding than it received last year, for example, with $23 million allocated to more teachers.

The Halton District School Board (HDSB) last week wrote to Lecce seeking enough money for a 15-student daily attendance, in-person model for kindergarten through grade 6, and for a withdrawal of the hybrid option for those grades. The board argued there are not enough childcare spaces in Halton to deliver that option, and that mixing students from different settings would increase their risk of infection.

“While Ford and Lecce say they want students back at school five days a week in September, they are showing no willingness to commit to any additional funding to school boards for the resources needed to keep our students and staff safe from COVID-19,” Harvey Bischof, the president of the Ontario Secondary School Teachers’ Federation, said on Twitter just ahead of the Thursday announcement.

Lecce said some funds had already been released, including $10 million to hire more social workers, psychologists and psychotherapists to deal with the mental health fallout from the pandemic, and $15 million for technology to buy 37,000 devices.

I’d like to better understand the TDSB calculation of financial need. How does 2,500 new teachers translate into $250 million? That’s $100,000 per new teacher!

Does anyone else think that’s a little high? Have they provided a breakdown of how they’ve arrived at such a number?