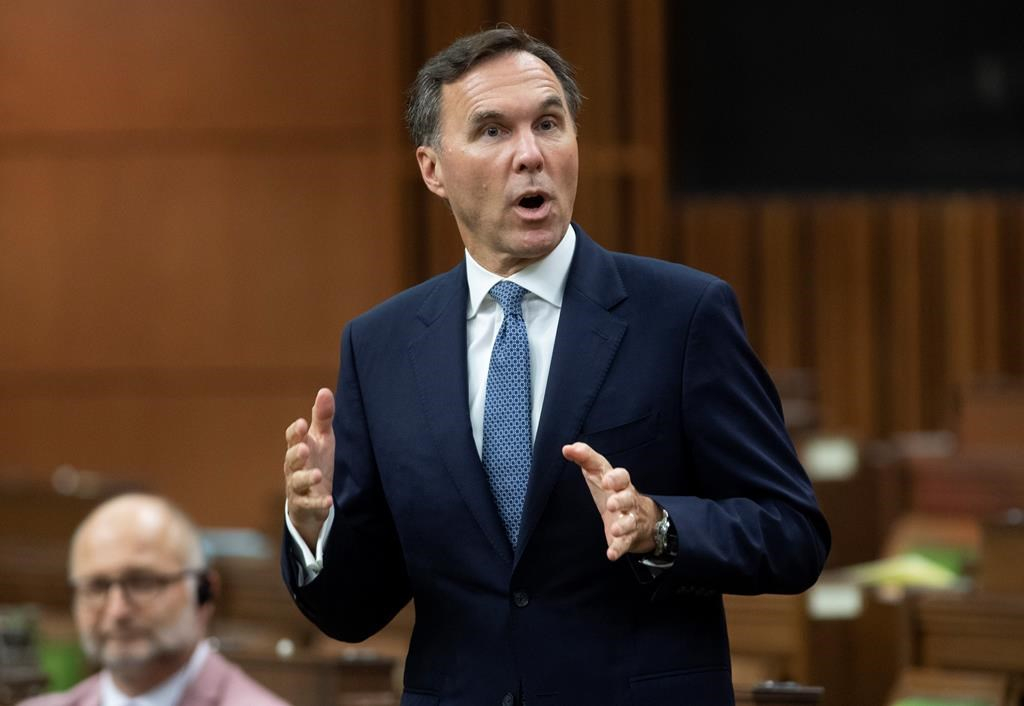 Finance Minister Bill Morneau rises during Question Period in the House of Commons in Ottawa, on Monday, July 20, 2020. File photo by The Canadian Press/Adrian Wyld
Previous story
Next story

Finance Minister Bill Morneau faced calls for his resignation Wednesday after revealing he had just repaid over $41,000 in travel charges to WE Charity — an organization MPs heard had multiple contacts with his office while the government planned its $900-million student-volunteer program.

Prime Minister Justin Trudeau has also agreed to testify before the House of Commons finance committee probing the aborted agreement, a rare move for a prime minister. So will his chief of staff, Katie Telford.

Trudeau's office said exact times and dates for those appearances have yet to be set.

The federal ethics commissioner is already investigating Trudeau's and Morneau's role in giving the WE organization a contract to run the Canada Student Service Grant, which the government presented as a way to help students with education expenses as they faced a summer of unemployment in a COVID-19-stricken economy.

It would have paid the group about $43.5 million.

Both have apologized for not recusing themselves from discussions because of their familial ties to the organization — Trudeau because of speaking fees paid to his brother, mother and wife, and Morneau because one of his daughters is nearing the end of a one-year contract in an administrative role.

(Trudeau also faces a call to testify before the Commons ethics committee, which late Wednesday voted to seek copies of records for his and his family's speaking appearances dating back years and to call him to appear. Six opposition members outvoted five Liberals to have that committee start its own investigation.)

Morneau began his appearance at the finance committee by saying he sent a cheque to the WE organization Wednesday to repay $41,366 in expenses the group covered for a trip he took to Ecuador in summer 2017 to see some of its humanitarian work.

Morneau said he always planned to personally cover those amounts, but WE never charged him, much to his surprise after poring through receipts ahead of his testimony.

It wasn't appropriate to accept the expenses even unknowingly, Morneau said, adding he passed the information on to the ethics commissioner.

"I'm not making an excuse. It was my mistake," Morneau told the committee.

Morneau began his appearance at the finance committee by saying he sent a cheque to the WE organization Wednesday to repay $41,366 in expenses the group covered for a trip he took to Ecuador in summer 2017 to see some of its humanitarian work.

Cabinet ministers are forbidden to accept such a benefit, a lesson Trudeau learned after the ethics watchdog cited him for his family's 2016 vacation to the Aga Khan's private island.

Morneau was found in violation of rules in 2017 for failing to disclose to the ethics commissioner a private holding company that owned a villa in France.

Conservative finance critic Pierre Poilievre told Morneau he had "lost the moral authority to hold your office" as the Official Opposition called on the finance minister to step down.

The timeline of events Morneau provided the committee on the WE controversy began April 5 when he had a conversation with Trudeau about how to help students whose summer-job and volunteer opportunities were vanishing due to the pandemic.

Two days later, WE was one of a dozen groups his office contacted to gauge challenges and possible program options.

WE sent a pitch to ministers on April 9 for a different, but related, youth program that would have cost between $6 million and $14 million. Morneau said the same day he got a briefing about a potential grant program for students looking to gain experience over the summer.

Trudeau told the House of Commons that pitch made its way to his office via the normal policy process, but was ultimately rejected.

By April 18, WE was being discussed as an option as Morneau's officials raised the idea of partnering with a non-profit, or for-profit group to administer the program. Morneau said it was the first time he was involved in any talk about WE and the grant program.

A senior Finance Department official, Michelle Kovacevic, told the committee Wednesday that on April 20, Morneau's office connected with WE to suss out its ability to deliver a volunteer program.

She told the committee that the records of the call note that "WE Charity will re-work their 10-week summer program proposal to fully meet the policy objective of national service and increase their current placements of 8,000 to double."

Morneau approved going with an outside organization to run the volunteer program on April 21, but no specific group was chosen. The next day, Trudeau announced the broad parameters of the program, and WE sent an updated pitch to the department now taking the lead: Employment and Social Development Canada.

Morneau spoke with WE co-founder Craig Kielburger on April 26, but the minister said neither he nor Kielburger talked about the Canada Student Service Grant program.

On May 4, Kovacevic said, WE sent a third proposal to ESDC, this time with more details and specific to the grant program. (Kovacevic said she received it May 7.)

The next day, Youth Minister Bardish Chagger went to a cabinet committee with the recommendation to go with WE. Cabinet, including Trudeau and Morneau, approved handing the reins of the program to WE on May 22.

The Liberals have said the non-partisan public service recommended WE, calling it the only organization able to launch a program as quickly and as broadly as the government wanted.

The opposition parties argue the timeline of events suggest the Liberals gave the charity the inside track on landing the program.

WE ultimately gave up the program at the start of the month as controversy swirled, along with criticism about effectively paying students below minimum wage and calling it volunteering.

Weeks later, the government is stumbling to roll out a pared-down version of the program.

Chagger told reporters officials are looking at multiple ways and programs to deliver the grants, but neither she nor ESDC provided a timeline for things to roll out.

Two groups representing thousands of post-secondary students called on the Liberals to abandon the troubled program and push its $912-million maximum budget to other student supports.

The Canadian Federation of Students and the Canadian Alliance of Student Associations say it's clear the program, which pays students up to $5,000 toward education costs based on the number of hours they volunteer, won't provide the financial help students are looking for.

— With files from Stephanie Levitz