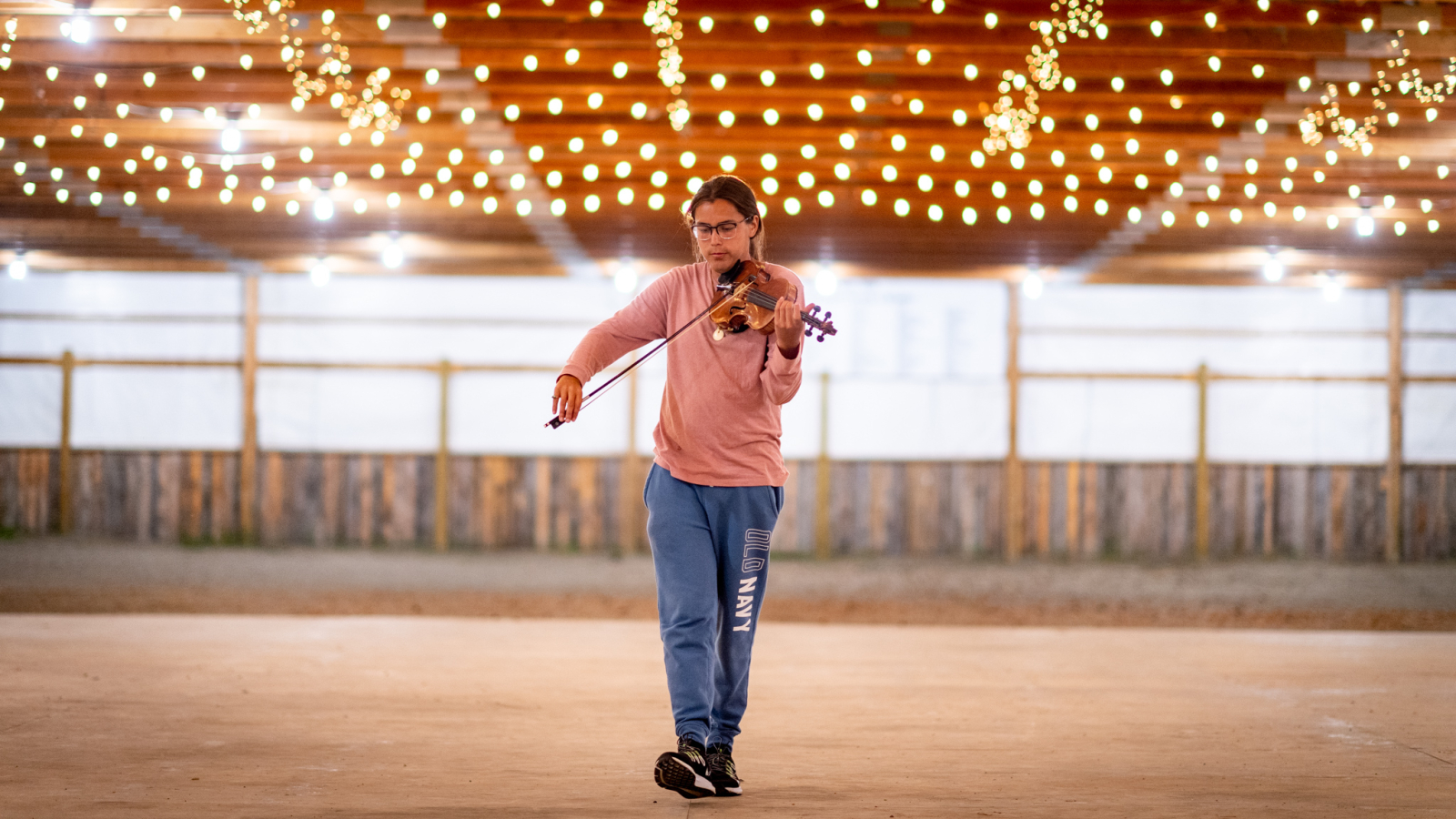 Métis fiddler Tristen Durocher at a private function catered by Métis Local members southwest of Saskatoon as he makes his way to Regina. Photo: Brandon White
Previous story
Next story

Métis fiddler Tristen Durocher has passed the halfway mark on his walk from La Ronge to Regina to press for a legislated suicide prevention strategy. He intends to fast in front of the legislature building until something is done about it.

The walk is in protest of the province's failure to adopt an Opposition bill to address suicide prevention by Cumberland NDP MLA Doyle Vermette this spring.

Durocher called the province “criminally negligent” for not working on a legislative solution to a problem that “should be bipartisan.”

“It’s a violation of their fiduciary responsibility to the residents of this province to provide mental health services,” Durocher said.

“The tragic loss of a person by suicide is felt not only by family and friends, but by the entire community. We want to assure the public that suicide prevention is a priority for the government of Saskatchewan,” government spokesperson Matthew Glover told Canada’s National Observer.

Durocher is putting together a collection of 200 photos from families who have lost loved ones to suicide that he plans to exhibit at a park in front of the legislature.

“There was one family that sent me a photo of a boy, and then four days later wrote me to say, ‘We didn’t think that we’d be sending you another photo (of another death) so soon, but this is our niece, and we lost her yesterday.’ That to me made this epidemic real, beyond statistics on deaths,” Durocher said.

“This is covert genocide.”

Rural and Remote Health minister Warren Kaeding said the government's action plan released in May would address those issues.

“I would speak to Scott Moe because.... when I articulate some realities that I’ve lived through.... I want to see if he has a look of shame. I’d really like to know where his heart is, " says Tristen Durocher.

“This plan will guide activities specific to suicide prevention based on Saskatchewan’s context. It was informed by careful consideration of approaches across the country and international best practice,” Kaeding said.

But Durocher and others remain unconvinced. “It’s not a legislated document and there’s no accountability for following through on any of those vague suggestions... It does not inspire a lot of confidence and neither does Warren Kaeding," Durocher said.

Jack Hicks, an adjunct professor of community health and epidemiology at the College of Medicine at the University of Saskatchewan, was highly critical of the province's move to reject the bill.

“The government of the province with the highest rate of suicide in the country becomes the first province in Canadian history to vote down a totally polite, sane motion calling for serious action on suicide prevention. That’s something,” Hicks told Canada’s National Observer in an interview Monday.

Saskatchewan had the highest suicide rate among the provinces as of 2018, which Hicks said is the most recent nationally comparable data.

“If it was a class assignment, I would give it a 'D',” Hicks said of Saskatchewan’s suicide prevention plan.

Glover said the five pillars of the plan align with those set out by the Mental Health Commission of Canada and include specialized supports.

Glover said the plan calls for specific engagement with First Nations and Métis leadership as the work progresses.

“The situation in northern Saskatchewan is not complicated and what needs to be done about it is not complicated,” Hicks said, adding the path to a solution has already been laid out for the provincial government in FSIN’s strategy.

“I think Tristen Durocher is absolutely right in his characterization of the provincial strategy.

“I almost hate to use the word strategy because it barely lives up to the term.”

Hicks said the federal government’s approach hasn’t been much more successful than Saskatchewan’s and gave it a C-minus, noting Canada and the Netherlands are “the two only developed countries in the world with no national suicide prevention strategy.”

He said suicide by Indigenous people is ghettoized in Canada on both provincial and federal levels.

“They should reflect on the pain that has driven (Durocher) to do this, they should pick up the FSIN strategy and read it. They should call FSIN and the Métis Nation and sit down and rethink this in a spirit of full partnership, recognizing this is a largely preventable public health issue,” Hicks said.

Glover said that the province has met with representatives of the FSIN and Métis Nation–Saskatchewan to discuss Pillars for Life.

Hicks also noted that while death by suicide disproportionately impacts northern and Indigenous communities, it was a spike in non-Indigenous suicide that pushed Saskatchewan’s rates above those of Manitoba in 2018.

“There’s no question it’s politically motivated. They wanted this to go away. They introduced a plan that is not a plan. It’s not a recognized suicide prevention strategy... It will not save lives,” Meili said.

Premier Scott Moe addressed the issue in the legislature in June and called Pillars of Life “the very first steps... on a journey that we need to travel… together as individuals in communities right across this province.”

Hicks said that in jurisdictions where suicide prevention plans have worked, such as the province of Quebec, it’s because it has been a bipartisan issue. But he said that’s not the case in Saskatchewan.

Meili said he worries the rejection of the bill was “more of a cynical move” because the government feels helping northerners and First Nations people is unpopular with its supporters.

“This is not a frivolous ask. This is an ask to save lives, and it’s worth them listening to.”

Durocher is also calling for Kaeding’s resignation. Glover said Kaeding has offered to meet with him. Durocher confirmed this, but said he declined to meet privately.

“That’s not how... northern Indigenous people do things. We work together. We are together trying to keep our communities on literal life support,” Durocher said.

“When we’re speaking to one of the premier authorities on rural and remote health, it shouldn’t just be me speaking on behalf of everybody.”

Durocher said he’s focused on getting to Regina, and he hopes the premier will meet with him once he is there.

“I would speak to Scott Moe because when I give some statistics to him, and when I articulate some realities that I’ve lived through... the funerals I’ve been to since I was a child, I want to see if he has a look of shame. I’d really like to know where his heart is.”

“Our government is always open to conversations about how we can make improvements to the challenges of mental health and suicide,” Glover said.