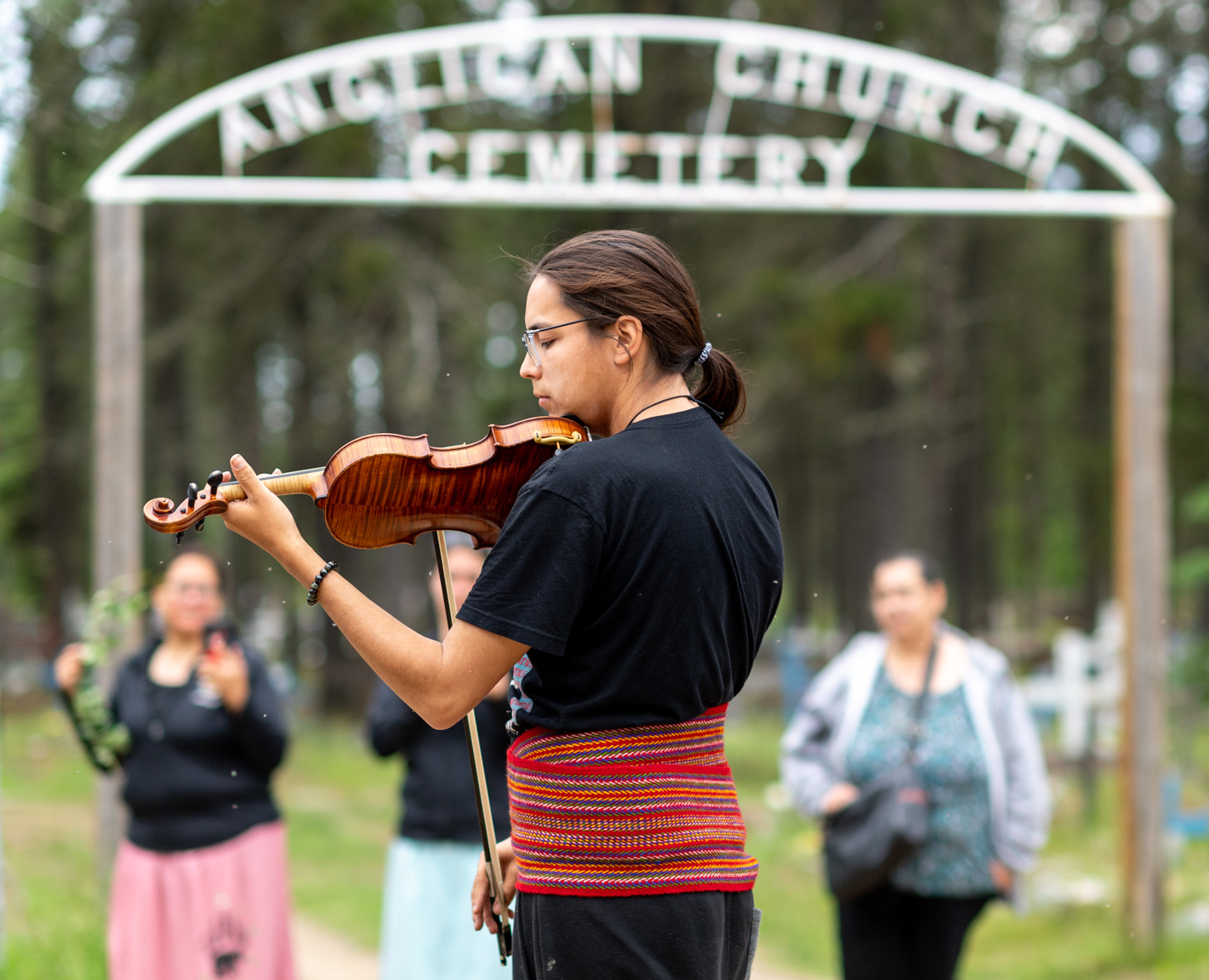 Tristen Durocher started his walk to Regina at the Anglican Church cemetery near La Ronge. Photograph by Brandon White.
Previous story
Next story

Métis fiddler Tristen Durocher is walking from La Ronge to Regina to protest the government’s refusal to pass a suicide prevention bill.

Joined on his walk by a group of supporters, Durocher wants the province to change its tune on suicide prevention.

Tristen Durocher plays fiddle in Air Ronge, Sask., the evening before embarking on a walk to Regina, where he hopes the legislature will change its stand on suicide prevention in the province. By Michael Bramadat-Willcock.

“I plan on arriving, walking to the front steps of the legislature in 'pile of bones' and playing Amazing Grace for the families who have lost their loved ones and for the mothers who are still grieving the death of their babies,” Durocher said.

Durocher, of Buffalo Narrows, and his supporters left Thursday from Fairchild Cemetery near La Ronge.

The Northern Cree drum group performing at a ceremony for Tristen Durocher and his companions on their way to Regina from La Ronge. By Michael Bramadat-Willcock.

They are walking 600 kilometres south to the provincial capital of Regina to push the provincial government to act after the defeat of the Opposition's bill on June 18.

"Seven reserves have declared states of emergencies. What good did that do? We kept digging graves. Politicians came for a weekend, took a few photos, called that consultation and continued to do nothing,” Métis fiddler Tristen Durocher.

“The lack of action and the complete indifference of our elected members who are in power is lethal and is killing and I’m sick of it. Those are our youth and our people,” Durocher told Canada’s National Observer on Tuesday.

Inspired by Mahatma Gandhi’s peaceful resistance tactics during British rule in India, Durocher says when he arrives, he will start a hunger strike in front of the legislature until the issue of suicide prevention legislation is addressed.

“I’m hoping that because it’s a fast and people will be watching ... they’ll see illustrated bare before their eyes the heartlessness of our elected leaders,” Durocher said.

The bill was put forward by Cumberland NDP MLA Doyle Vermette on behalf of families whose loved ones died by suicide in the province.

But Bill 618 — the Saskatchewan Strategy for Suicide Prevention Act — was voted down by Saskatchewan Party members in the legislature.

Vermette told Canada’s National Observer that the bill was not meant to be partisan. Rather, it was put forward on behalf of constituents.

“This wasn’t Doyle Vermette’s bill, this wasn’t the NDP’s bill. It is our youth and parents who have lost their children to suicide who are demanding it.”

Vermette said he was exhausted after it was rejected, but gained fresh hope when Durocher called to tell him about the walk.

“All members in power, who had the capacity, the means and the power to save lives unanimously said no. That was a beautiful illustration of just how much they don’t give a s—t,” Durocher said.

“I’m walking from La Ronge to Regina asking people in our province, people in our country, to give a s—t. And I’m fasting on that lawn (in front of the legislature) until they pass meaningful legislation. I want them to feel the urgency that we feel.”

Durocher is joined by Christopher Merasty, founder of a men’s support group in La Ronge called Men of the North.

The defeat of the suicide prevention bill was the last straw for Merasty, too. He said he’s also tired of watching community members die while the province twiddles its thumbs.

“If we have a concrete plan in place, and we stick with it, be consistent with it, I’m sure that we are going to save lives. We need to address this, and we need to change this.”

Merasty said he wants to provide protection and companionship for Durocher on the walk.

“This walk is for hope. Hope that something is going to change in our northern communities here in Saskatchewan for every man, woman and child who lives in our north and right across Canada.”

An average of 144 people die by suicide each year in the province. Between 2005 and 2019, more than 2,200 people in Saskatchewan died by suicide, according to data from the Saskatchewan Coroners Service.

The provincial government has put forward a plan, which it thinks is enough, but critics say that not attaching binding legislation makes it effectively useless.

“Mental health continues to be a high priority for our government, our health system and our communities,” Kaeding said.

The province’s suicide prevention strategy states that it will co-ordinate activities to promote life and reduce risk factors related to death by suicide in Saskatchewan.

“This plan will guide activities specific to suicide prevention based on Saskatchewan’s context. It was informed by careful consideration of approaches across the country and international best practice,” Kaeding said.

Vermette maintains that legislation, as opposed to a plan, would be more effective because it would hold institutions accountable.

“Seven reserves have declared states of emergencies. What good did that do? We kept digging graves. Politicians came for a weekend, took a few photos, called that consultation and continued to do nothing,” Durocher said.

Durocher held an intimate smudging ceremony between family and friends on Wednesday in Air Ronge, the day before leaving for Regina.

Coincidence or not, on the same day in 1884, Louis Riel arrived in Batoche, Sask., to assert Métis sovereignty in what is today Western Canada.

“I just released my first fiddle album, which is kind of funny because here’s this music that the Métis people have used to deal with our grief for hundreds of years,” Durocher said.

Durocher is walking to the provincial capital accompanied not only by supporters, but also his music.

“These old traditional tunes that were with us on the old frontiers and at the trading posts and in 1885 and at the church in Batoche. Our music always helped us keep our spirits intact,” Durocher said.

Regina is called “pile of bones” because it was the site where slaughtered Buffalo bones were piled high during the height of colonial genocide in the Prairies. Buffalo were slaughtered as the land was settled by agrarian colonists and as a way of eliminating Indigenous peoples' source of food.

On Thursday morning, the protest walk began with a ceremony at the site of a cemetery where people who have died by suicide are buried.

Lac La Ronge Indian Band chief Tammy Cook-Searson spoke in both Cree and English at the sendoff: “You’re going to bring to light that we need to do something different for suicide. We have so many suicides.”

Cook-Searson shared that she lost her sister to suicide.

“The statistics are there, but we are not only statistics. These are real people. These are people that are loved who we lost.”

The ceremony was interlaced with music from the Northern Cree drum group, which came from Alberta to participate in the sendoff.

“For me, first and foremost, this is a ceremony. The elders say that spirits wander when they take their own lives because they’re still angry, they’re still hurting, and they’re still grieving. This is my way of giving them closure,” Durocher said.

“This is my way of calling them to us and saying: Walk with us, see how much we love you, and feel how much we always will. And I’m hoping when we get to that lawn, we have the whole invisible march of the spirits who passed on because of this.”

This year’s annual report from provincial children’s advocate Lisa Broda concluded that of the 34 deaths recorded in the provincial child welfare system last year, 29 were Indigenous children (First Nations or Métis) and seven of the 34 were deaths by suicide.

“I’ve lived through this, I’ve borne witness to this, I’ve stood at the graves of children with their families grieving and put on a strong face to fiddle because their little brothers and sisters needed something to look at other than their mothers and grandmothers in the depths of grief,” Durocher said.

“I don’t let the kids see me broken. Never. But there are times behind closed doors when the tears come and there have been nights where I wasn’t sure if they would ever stop and I’ve had enough of that.”

"The only good indian is a

"The only good indian is a dead indian"

For too long, this sentiment and others of its ilk, have defined the malice that seems to inhabit the human psyche and not all the years, not all the learning, not all the religions have been able to eradicate this primal, dinosaur brain fear, hate and violence from the human animal.

This is just another of the ugly racist memes - that translates worldwide, only the names change, jews, chinamen, slaves of all colours, Rohingya, women...the list is endless, will not end until humanity extinguishes itself or ....?