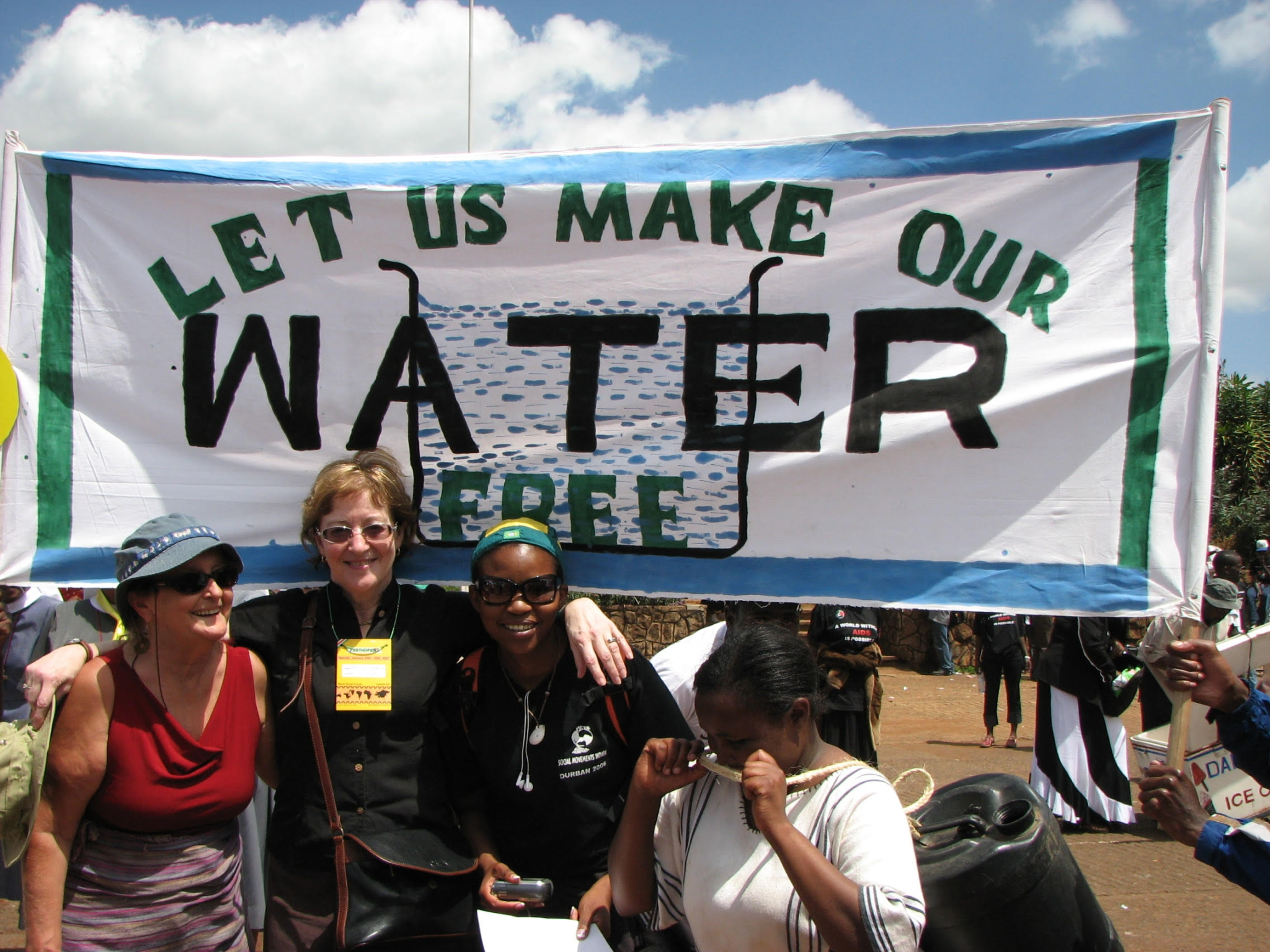 Maude Barlow (second from the left) in Nairobi, Kenya, during the April 2007 World Social Social Forum where the right to water was featured. Photo by Anil Naidoo
Previous story
Next story

Ten years ago today, the United Nations General Assembly adopted a resolution affirming that water and sanitation are fundamental human rights “essential for the full enjoyment of the right to life.” Two months later, the UN Human Rights Council clarified that governments have the primary responsibility to deliver these new rights, but called upon member states and international organizations to assist countries of the global South that might have difficulty in fulfilling the new obligations.

This was an historic development in the long search for water justice.

Water was not included in the 1948 Universal Declaration of Human Rights because it seemed to be a limitless resource available to all. But the “perfect storm” of global water depletion and destruction, growing poverty and inequality between and within nations, and rising water rates — often the result of the privatization of water services — led to a full-blown human rights crisis by the turn of the 21st century. With billions living without access to clean water and sanitation, the call for water justice was born.

The fight to recognize the human right to water was surprisingly fierce and bitter. It was opposed by the private water utilities and the bottled water industry, the World Bank that was promoting water privatization in developing countries, the World Water Council, and many wealthy countries of the North, including the United States, Great Britain and Canada.

Their opposition reflected a mighty contest about whether water is a commodity or a commons. In adopting this resolution, the nations of the world affirmed that it is not OK to watch your child die of water-borne disease because you cannot pay for clean water. They clarified that water is not just a “need,” but a human right, and that affected communities are demanding justice, not charity. In doing so, the human family took an evolutionary step forward.

There have been real and tangible results. More than four dozen countries have either amended their constitutions or introduced new laws to guarantee the human right to water.

Communities in the global South have used the UN recognition to fight foreign mining or oil companies destroying their water sources. Citing the UN resolution, the city of Delhi now provides 20,000 litres of free water to every household each month. To fulfill its UN obligation, the government of Rwanda has undertaken an ambitious program to provide water and sanitation to its people.

The right to water has been used to challenge water shut-offs from Mumbai, India, to the courts of France and Flint, Mich. The Kalahari Bushmen of Botswana successfully used the UN resolution in court to regain access to their desert water sources that the government had destroyed in an attempt to drive them from their homeland.

To fight water privatization, many towns and cities have become “Blue Communities,” a Canadian initiative that is spreading around the world. Almost 25 million people now live in official Blue Communities that have pledged to protect water as a human right, a public trust and public service and to phase out bottled water on municipal premises and at municipal events. These cities include Montreal, Vancouver, Los Angeles, Paris, Berlin and Brussels.

However, we are in a race against time as humans divert, pollute, over-extract and mismanage the world’s dwindling water supplies. Massive drought is threatening lives and livelihoods around the world. At least 21 major cities in India are due to run out of water in the foreseeable future.

The COVID-19 pandemic has thrown a huge spotlight on the water crisis as half the world's population does not have a place to wash their hands with soap and warm water. As a result, some of the aid money coming from northern countries and the UN is targeted to providing clean water and sanitation to those most in peril. Perhaps this will lead to real change.

This is a travesty. Let us vow to fulfill the pledge taken by the nations of the world 10 years ago. Water is a human right.