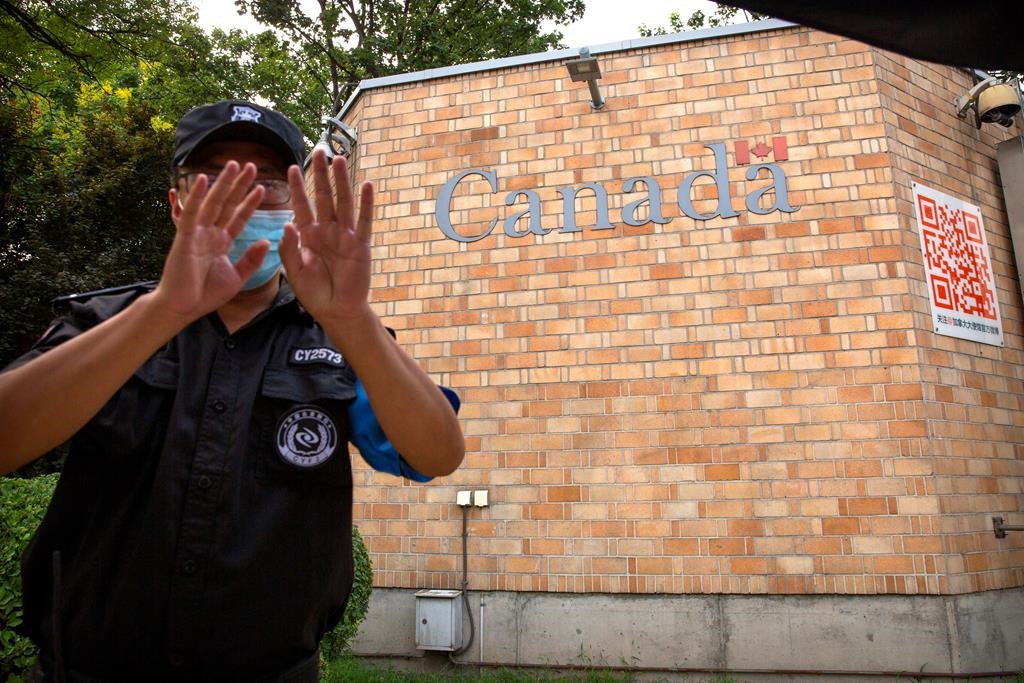 A security officer wearing a face mask to help protect against the coronavirus gestures outside the Canadian Embassy in Beijing, on Thursday, Aug. 6, 2020. Photo by The Associated Press/Mark Schiefelbein
Previous story
Next story

Canada is "profoundly concerned" about a Canadian citizen sentenced to death Thursday on drug charges in China, a spokesman for the federal government says.

The Guangzhou Municipal Intermediate Court announced Xu Weihong's penalty on Thursday and said an alleged accomplice, Wen Guanxiong, had been given a life sentence.

The brief court statement gave no details but media in the southern Chinese city at the heart of the country's manufacturing industry said Xu and Wen had gathered ingredients and tools to make the drug ketamine in October 2016, then stored the final product in Xu's home in Guangzhou's Haizhu district.

Police later confiscated more than 120 kilograms of the drug from Xu's home and another address, the reports said. Ketamine is a powerful pain-killer that has become popular among club-goers in China and elsewhere.

"Canada opposes the use of the death penalty in all cases, everywhere," said Global Affairs Canada spokesman John Babcock. "Canada has consistently raised our firm opposition to the death penalty with China and will continue to do so."

He said Canadian diplomats have given Xu consular assistance and were present for the sentencing. Canada is seeking clemency.

Relations between China and Canada soured over the arrest of Meng Wanzhou, an executive and the daughter of the founder of Chinese tech giant Huawei, at Vancouver's airport in late 2018. The U.S. wants her extradited to face fraud charges over the company's dealings with Iran. Her arrest infuriated Beijing, which sees her case as a political move designed to prevent China's rise as a global technology power.

Xu was arrested two years before Canada detained Meng and relations deteriorated. Death sentences when cases involve large amounts of drugs are not rare in China.

In April 2019, China gave the death penalty to a Canadian citizen identified as Fan Wei in a multinational drug smuggling case.

Canada is "profoundly concerned" about a Canadian citizen sentenced to death Thursday on drug charges in China, a spokesman for the federal government says.

But China did hand a death sentence to convicted Canadian drug smuggler Robert Schellenberg in a sudden retrial following Meng's arrest, after he had already been sentenced.

China has also placed restrictions on various Canadian exports to China, including canola seed, in an apparent attempt to pressure Ottawa into releasing Meng.

These tensions, and how the Liberal government has handled them was the subject of a hearing by the House of Commons Canada-China relations committee later Thursday.

David Mulroney, a former Canadian ambassador to Beijing, told the committee that he had hoped the federal government would use the period of increased tensions to rethink Canada's relationship with China and more realistically assess the Chinese government's strategy to suppress human rights domestically and exert economic and diplomatic blackmail to expand its influence on global affairs.

"It's not clear that the government has completely given up the fiction that China is our friend. Nor has it consistently summoned the courage to speak and act with integrity."

Referring to a letter signed in June by former federal ministers, diplomats and academics urging the government to release Meng in exchange for freedom for the two Michaels, Mulroney added: "Powerfully placed Canadians continue to argue that if we appease China just one more time, all will be well."

He said "dangerous myopia" about China is also evident among provincial and municipal governments, noting the Ontario city of Markham's decision last year to raise the Chinese flag on that country's national day.

"Something's wrong here and it has to change. People need to remember that the ultimate objective of foreign policy is not to flatter, not to obscure inconvenient truths, but to advance and protect Canadian interests and values."

Mulroney said he's not suggesting Canada should provoke or insult China. But he said Canada should reduce its dependence on Chinese trade by working with allies to establish new supply chains in vulnerable sectors and launching trade diversification efforts.

Canada should also take steps to combat Chinese interference in this country, adopting something like Australia's Foreign Influence Transparency Act, he said. The act requires any citizen who chooses to work for a foreign entity and former politicians and diplomats who do anything to share their expertise with a foreign country to publicly report their activities.

Two other former ambassadors to China, John McCallum and Robert Wright, declined the committee's invitation to appear. Committee members voted unanimously Thursday to summon both men at a later date.

"I would like to stress that China's judicial authorities handle the relevant case independently in strict accordance with Chinese law and legal procedures," Wang said at a daily briefing Thursday.

"This case should not inflict any impact on China-Canada relations."

Wang added that "death sentences for drug-related crimes that are extremely dangerous will help deter and prevent such crimes."

This report by The Canadian Press was first published Aug. 6, 2020.