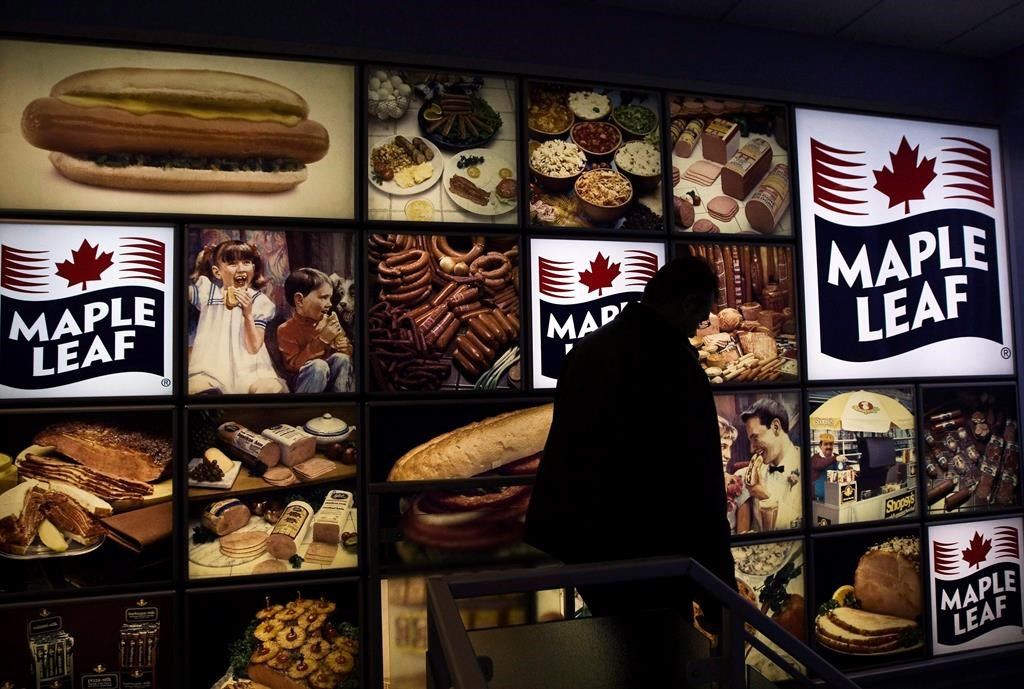 A Maple Leaf Foods employee walks past a Maple Leaf sign at the company's meat facility in Toronto on December 15, 2008. File photo by The Canadian Press/Nathan Denette
Previous story
Next story

A Maple Leaf Foods facility in Manitoba where 10 workers have tested positive for COVID-19 will remain open, the head of the company said, despite calls from the union to halt production.

Maple Leaf Foods president and CEO Michael McCain said he has confidence in the safety precautions at the meat-processing plant. Employees at the Brandon facility undergo daily health and temperature screenings, wear personal protective equipment and practise social distancing within the plant.

"We are confident that our workplace is safe and we will continue operating," he said in a statement Friday.

Six of the worker cases were reported Friday, bringing the total to 10 since last weekend.

The cases are linked to local gatherings outside the plant, McCain said. He urged Brandon's mayor to call on residents to follow social distancing and wear masks to stop the spread of the virus.

Dr. Brent Roussin, chief provincial public health officer in Manitoba, said the cases are part of a cluster of 34 in the city west of Winnipeg, and appear to be connected to a person who travelled from Eastern Canada.

He said an investigation shows the infected workers did not acquire the virus from the plant.

Roussin added that there is indication of community spread in Brandon.

"We are renewing our call on Maple Leaf to halt production in the Brandon plant until this situation is under control," Traeger said in a memo Friday morning.

The union, which represents nearly 2,000 workers at the plant, said many employees have asked if they can refuse to go to work. The union said it is complicated, since the province has deemed their work essential and the facility safe.

A Maple Leaf Foods facility in Manitoba where 10 workers have tested positive for COVID-19 will remain open, the head of the company said, despite calls from the union to halt production.

"If you notice that protocols are not being followed properly, then you need to let your union know immediately," the memo said.

Manitoba spent months with low numbers of new infections of COVID-19 and has seen a drastic increase recently. Health officials announced 30 new cases on Thursday and 17 on Friday.

Public health and workplace safety authorities inspected the plant Thursday, and the company said the results support its decision to continue operations.

Roussin said the industry has learned from serious outbreaks at meat-processing plants in southern Alberta this spring.

Premier Brian Pallister said the province would only step in if recommended by health experts. He noted that the rise in cases shows people need to remain vigilant.

"Safety is the key to this recovery," the premier said. "There is nothing more important than that."

This report by The Canadian Press was first published Aug. 7, 2020