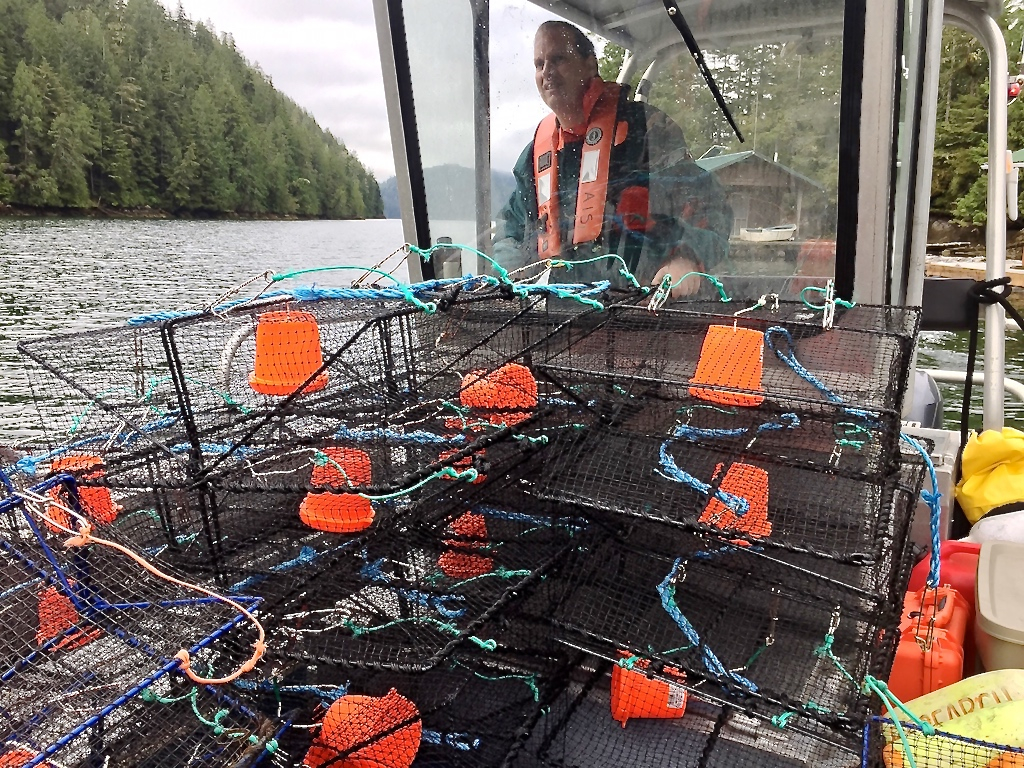 Cynthia Bendickson believes an ecological battle along the inside passage of Vancouver Island is looming.

It’s not a question of if, but when the invasive European green crab will land on the shorelines of the Salish Sea, says the biologist and executive director of the Greenways Land Trust.

“Aquatic invasive species are particularly hard to control once they're out into the environment,” Bendickson said.

“(Offspring) can drift on currents a long, long ways. So that's why it's likely inevitable that we are eventually going to be dealing with this.”

The European green crab is one of the 10 most unwanted species in the world, according to Fisheries and Oceans Canada (DFO).

The smallish shoreline crab is resilient, voracious and has the ability to disrupt the overall balance of a marine ecosystem.

It devours a wide variety of intertidal animals, particularly shellfish such as oysters, mussels, clams and other young native crustaceans, including Dungeness and red rock crabs.

It also can mow down eelgrass beds, destroying essential habitat for any number of small or juvenile fish species, such salmon or herring.

The green crab is already firmly established on the south and west coast of Vancouver Island, Bendickson said.

That's why conservation groups, First Nations and stakeholders in the commercial fishing industry along the north island’s inside passage are on high alert.

It’s not a question of if, but when the invasive European green crab will land on the shorelines of the Salish Sea, says biologist and executive director of the Greenways Land Trust, Cynthia Bendickson.

“We haven’t been doing a lot because we haven't had to up till now,” Bendickson said. “But it’s certainly on the radar.”

Greenways Land Trust is heavily invested along with its partners in monitoring and protecting the Campbell River estuary, she added.

The estuary is one of the largest along the central coast of east Vancouver Island and has huge value to fish and wildlife in the region, Bendickson said.

“It’s completely important,” she said. “Four of the five Pacific species of salmon spawn in the Campbell River.”

Stakeholders have been taking base level surveys of eelgrass beds to monitor their health, as the beds suffered declines in the past.

“So, losing even more eelgrass is really very worrying,” she said.

The green crabs can threaten eelgrass habitat up and down the coast, she added, including the Discovery Islands and other outer islands.

“Anywhere you get freshwater meeting the ocean you potentially have eelgrass, so there are lots of pockets and salmon streams on the islands that might be impacted,” Bendickson said. “But those ones are harder to monitor, so it makes it even more of a challenge.”

Thomas Therriault, a research scientist with the DFO, says the European green crab arrived in B.C. from the waters farther south in California in the late 1990s.

Since then, the invader has rapidly established itself in the Sooke Basin and the west coast of Vancouver Island, Therriault said.

There are now reports of the crustacean on the B.C.’s central coast and a recent sighting in Haida Gwaii, he added.

It’s most likely green crabs are travelling along the B.C. coast on ocean currents during their larval stage, Therriault said.

The female crabs can release up to 185,000 eggs once or twice per year. The larval stage is 50 to 80 days, and those offspring can drift long distances before settling in a new location.

Interventions are pretty limited in this stage of the crab’s life, Therriault said.

“It disperses on ocean currents. I mean, that's not really something that can be stopped,” he said.

There have been reports of the green crab in the inside passage along Vancouver Island, but at this point there’s no evidence there’s a self-sustaining population, Therriault said.

But DFO is keen to monitor the situation and any sightings of the crab in areas such as the Strait of Georgia, the Johnson Strait or further north around Haida Gwaii.

“As the invasion unfolds, especially in new areas like the Salish Sea, the public can play an important role by reporting observations of European green crab to us,” said Therriault.

The crab can grow up to 10 centimetres across, and can be red or yellow, as well as green. But the most distinguishing feature is the set of five spines on each side of its eyes, he said.

DFO follows up reports and decides whether to conduct trapping to determine the population size.

“It’s a bit of scoping to determine, you know, what's the scale of the incursion,” he said.

Generally, if an invasive species is detected early enough, an eradication program might be considered if a sensitive species or habitat needs to be protected, Therriault said

But when an invasion is widespread, suppression is generally the remaining option.

With an invasive species as widespread as the green crab, it’s probably best to pick your battles, Therriault said.

“What we can do is think about how we control the density of crabs in areas that we most value or care about,” he said.

The goal is to suppress the population in a strategic way that allows import ecosystems to maintain some degree of functionality, he added.

Bendickson agreed it was unrealistic to think there might be a way to wipe out, or completely prevent the green crabs' arrival into the Campbell River estuary.

“I think that they’ll come,” she said.

“But with vigilance, and an appropriate response through some control program, we can keep the invasive species to a minimal level so they don’t have a huge impact.”

To report European green crab sightings, except along west Vancouver Island, call 1-888-356-7525 or email [email protected] in the Pacific region. Those reporting should submit a photograph, an exact location and date of sighting, and note identifying features.