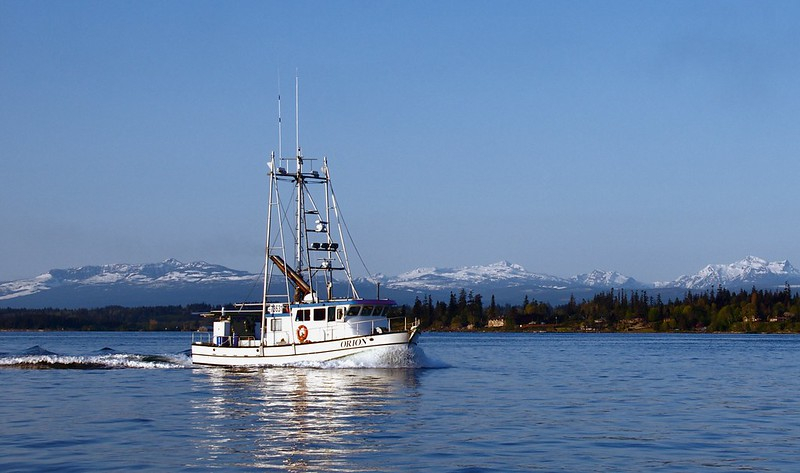 Most summer mornings, Jessica Taylor awakens before dawn and puts coffee to boil, the rich steam an alarm clock for her predominantly male crewmates.

The Sointula-based, sixth-generation fish harvester’s subtle opening to another day fishing is vital for the crew’s mental well-being and successful catch, yet beyond the boat, it will often go unnoticed in official fisheries data. So will Taylor's role as a female fisher.

That’s a global trend, according to researchers at the University of British Columbia, and one they valued to be at least $7.4 billion ($5.6 billion US) a year globally. The study is the first to estimate the dollar value women contribute to fisheries.

“There’s so much background work that nobody knows about,” Taylor said. For the past four seasons, she has worked on a salmon seiner. Her primary role aboard is operating the drum — a large mechanical winch that brings in the net and where a mistake easily could cost easily her a hand — but she’s also the cook and charged with keeping the boat shipshape.

That lack of recognition is common. Taylor said when she started fishing, she had to constantly prove herself in the male-dominated industry — on top of taking on tasks to keep the boat running. Things are easier now that she’s firmly established in the industry, but at a larger scale, problems remain.

Fishing is viewed as a predominantly male industry. That bias is reflected in language — “fisherman” remains the most common term to describe a fish harvester — and in national databases. It’s also inaccurate, explained Sarah Harper, the lead researcher for the UBC study and a post-doctoral fellow at UBC’s Institute for Fisheries and Oceans.

“What I was trying to highlight was that women are very much involved,” she said. “So, really trying to change that narrative around women in fisheries.”

According to the study, about 2.1 million women account for roughly 11 per cent of participants in small-scale fisheries.

Their work contributes about 2.9 million tonnes of fish worth roughly $5.6 billion US.

And unlike most of the fish accounted for in most datasets, which tend to focus primarily on export value, Harper found that the majority of the seafood harvested by women is sold locally or consumed by their families. That means the total economic impact of these catches add up to some $22 billion (or $17 billion US) annually.

About 2.1 million women account for roughly 11 per cent of participants in small-scale fisheries.Their work contributes about 2.9 million tonnes of fish worth roughly $5.6 billion US.

To reach these numbers, Harper and her co-authors drew from existing gender-segregated national databases and looked to newspapers and interviews with local fisheries experts and NGOs to estimate women fish harvesters' national participation rate in the fisheries.

Then, they multiplied this rate by the total catch value of small-scale fisheries in each country, including artisanal and subsistence fisheries, to estimate how much seafood was caught and its value.

Harper cautioned that these numbers were rough estimates that primarily highlighted women’s extensive contributions to fisheries globally, knowledge that, for instance, could inform global and regional fisheries policies, particularly regarding food security.

“The premise that I went with is that, in many places right now, the narrative is that women don’t fish… These estimates are moving towards (showing) the reality women are fishing, but those activities… are not captured in the statistics and are not considered in policy.”

However, in B.C., the situation is a bit different, said Harper, who has also worked with the Heiltsuk Nation on the province's Central Coast.

Fisheries and Oceans Canada tracks the number of women fishing in the province, with the most recent analysis done in 2011 showing that 37 per cent of B.C. fish harvesters are female. Most, like Taylor, work on boats with mixed-gender crews.

That means their unrecognized contributions to B.C. fisheries lie in other parts of the seafood processing and distribution chain. These jobs include working in processing plants or managerial roles, political advocacy, bookkeeping, or caring for their families and communities. Women play a key role in ensuring that fish can both feed their communities and fuel local economies, Harper said.

“The connecting thread (between the global study and B.C.) was looking at this broader fisheries-related economy, beyond just going out and catching fish, to asking what it takes to make sure there’s fish to catch — and who’s involved in that.”

These other roles are especially important in Indigenous communities, Harper said, where women have played key roles in pushing for policy changes to increase their communities’ access to B.C. fisheries to meet nutritional, economic, and cultural needs.

For Taylor, however, the best fisheries job is one with her feet on deck. She is sure she will remain a fish harvester, supplying her community in addition to larger B.C. and international markets her entire life.

She loves the job — it lets her explore the B.C. coast, foster a tight-knit community with other fish harvesters, and produce high-quality food for relatives and friends. And she hopes others will join her.

“There’s not enough women on the boat,” she said.