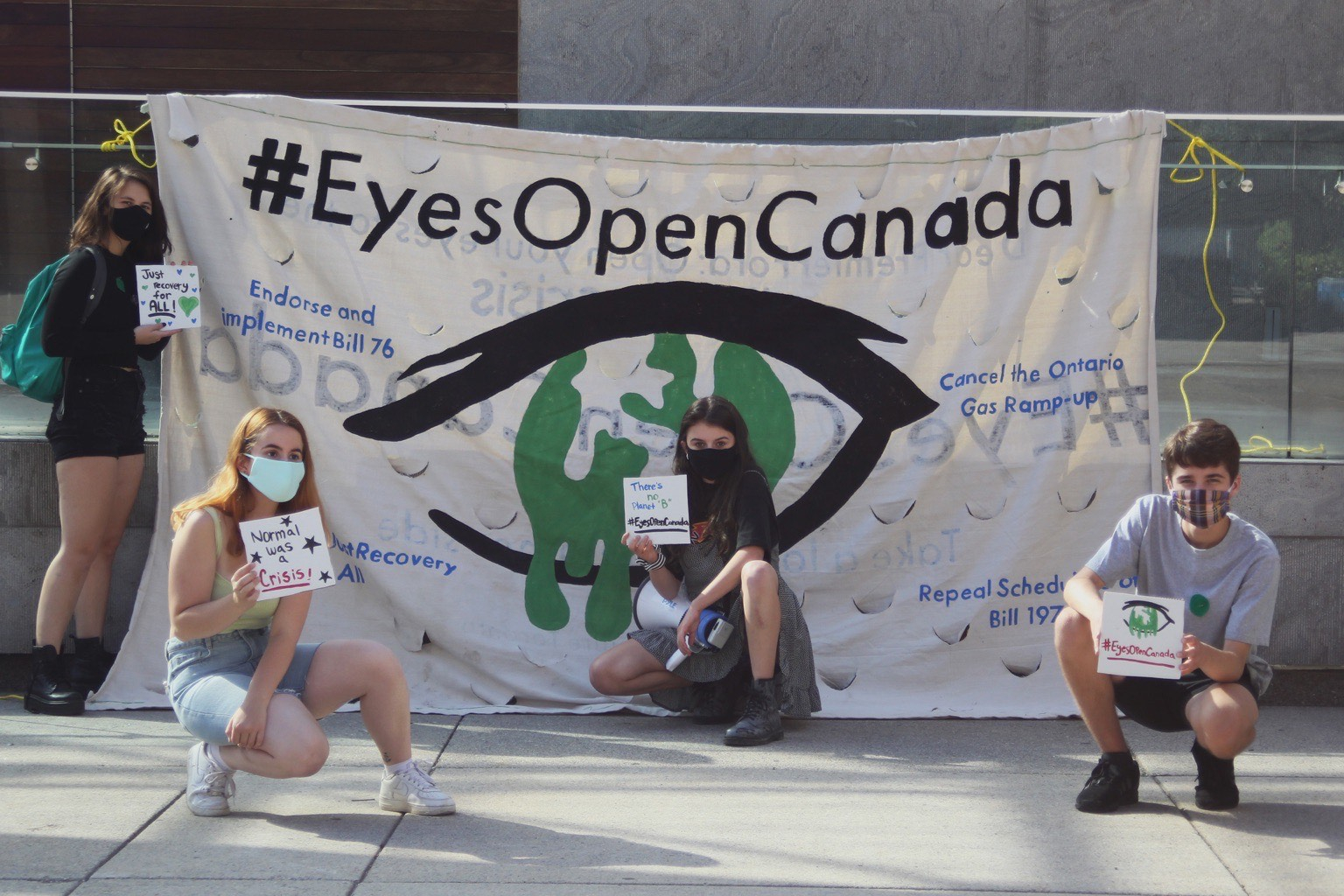 A handful of climate activists in several Canadian cities demanded green justice on Wednesday, venturing out to the streets for the first time since the COVID-19 pandemic and a ballooning push for racial justice moved their environmental campaigns to the side.

The young campaigners from the Fridays for Future movement dropped banners outside the Queen’s Park provincial legislature and city hall in Toronto, as well as near Parliament in Ottawa and sites in Montreal and Edmonton, taking advantage of a recent easing of restrictions on public gatherings to mark International Youth Day.

In Ontario, the group called on the Ford government to repeal a section of its pandemic recovery bill that loosens environmental regulations, incorporate the UN declaration on Indigenous rights into provincial law, and cancel plans to burn more natural gas.

The activists inspired by Swedish teen Greta Thunberg lost much of the momentum from their climate action street protests of 2018 and 2019 when COVID-19 limited public gatherings early this year, and have since been reduced to mostly online actions.

“We really don't have a direction right now is the problem,” said Payton Mitchell, an organizer of student climate strikes from Montreal who did not take part in Wednesday's activities, about the climate movement’s current status.

“It just doesn't feel right to put people’s health at risk for a largely symbolic climate action when there is such important activism that is not symbolic, it’s really active,” Mitchell said, acknowledging the broader society and the climate movement itself are focused on the more urgent demands of the Black Lives Matter movement.

“With the police brutality stuff, we're also seeing a lot more concrete action coming from that,” she said. “So I think we're in a space right now where climate is taking a back seat and the people who were really heavily involved in climate activism are volunteering their energy to other causes.”

Toronto’s mayor on Tuesday promised sweeping reforms to the city’s police force following sustained protests and the release of a report that outlines more than 80 recommendations to address systemic racism.

Today, we celebrate our youth. We celebrate your voices, your actions, and everything you're doing to build a better future - because from fighting climate change to demanding justice and equality, change starts with you. Happy International #YouthDay! https://t.co/sM9Qvs1iDu pic.twitter.com/Safhlg2t0B

Climate activism is still there, Mitchell said, but it’s more targeted at real-life decisions that hang in the balance. For example, students in Quebec are pushing their government to next month reject a proposed liquid natural gas pipeline and terminal project.

Climate is taking a back seat and those heavily involved in climate activism are volunteering their energy to other causes including the push for racial justice, says one climate strike organiser

“We’re gonna not let it happen,” Mitchell said of the Gazoduq Project, which she said in one year of operating would counteract all of Quebec's emission reductions since 1990.

The climate action movement has not been completely dormant, but most of its activity has moved online, or even into a virtual courtroom.

In the latest legal move, a coalition of environmental groups filed a lawsuit against the Ford government earlier this week alleging the province’s lack of public consultation on environmental changes in its economic recovery bill is “unlawful.”

As National Observer journalists should know - and by now everyone else out there - ALL OF THIS IS CONNECTED!!! Once anyone starts separating the issues into silos, nothing gets done!
If you need further proof, please read some of David Suzuki's articles!
Spend a few minutes with the Green New Deal to see how addressing any issue helps every other issue!