Scrutiny of WE Charity did not include financial situation: PCO clerk 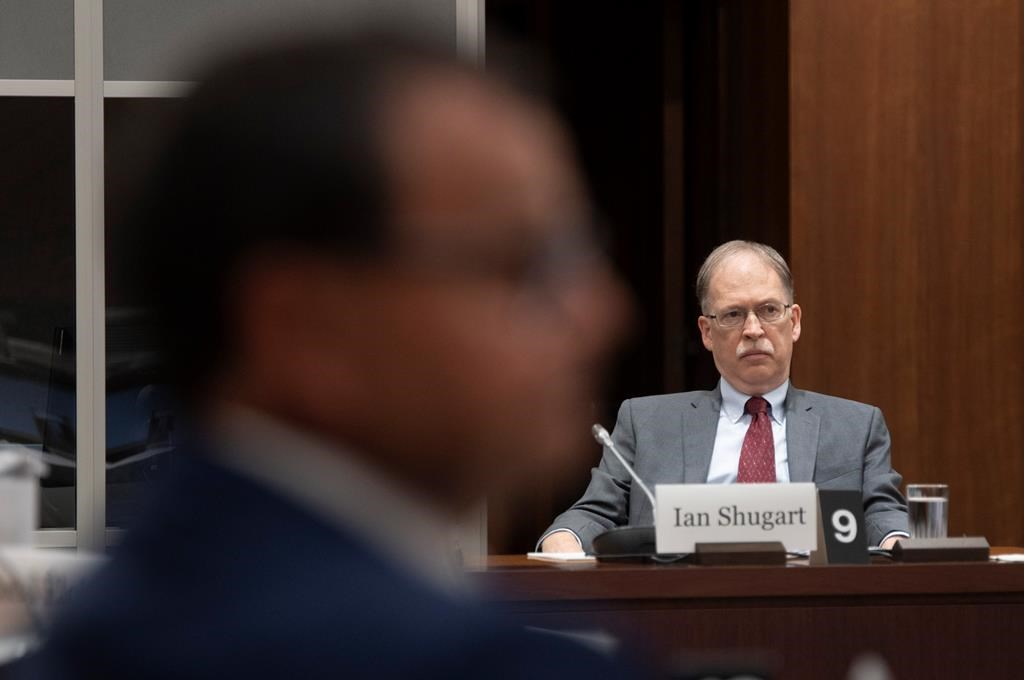 Members of Parliament and Clerk of the Privy Council Ian Shugart wait for the House of Commons Ethics committee to begin in Ottawa, on Tuesday, Aug. 11, 2020. Photo by The Canadian Press/Adrian Wyld
Previous story
Next story

Canada's top public servant says federal officials did not probe the WE organization's financial situation or governance structure when doing homework on a deal with the charity to administer a pandemic grant program for student volunteers.

Due diligence focused on WE Charity's ability to deliver the program, Ian Shugart, clerk of the Privy Council, told the House of Commons ethics committee Tuesday.

Shugart said senior officials at Employment and Social Development Canada, which ultimately signed the contract with WE, told him they had a track record with the organization, which reassured him about the charity.

Prime Minister Justin Trudeau has said he initially pushed back on the proposal to have WE administer the Canada Student Service Grant when it came to his attention in early May, knowing his family's connections with the organization would lead to significant scrutiny.

Shugart confirmed Trudeau asked for further evaluation of the deal, which would have paid WE Charity up to $43.5 million to administer a grant program designed to encourage students to sign up for volunteer work related to the COVID-19 pandemic. Ottawa budgeted $912 million for the program, but the deal with WE was for $543 million.

Officials went back and examined whether WE Charity had the ability to administer a Canada-wide student volunteer program, and whether it could deliver these services in both official languages.

Other issues relating to WE Charity's organization, board of directors, financial state and governance structure were not considered at that time, Shugart said.

When it came back to cabinet two weeks later, Shugart says, he believed the due diligence undertaken was sufficient.

The former chair of WE Charity's board of directors, Michelle Douglas, told the House of Commons finance committee last month she resigned in March after the organization began a series of mass layoffs but refused to provide financial justification to the board for them.

She also testified a majority of those on the Canadian and American boards of the charity resigned or were replaced around the same time — something WE co-founders Craig and Marc Kielburger said was part of a board renewal.

Canada's top public servant says federal officials did not probe the WE organization's financial situation or governance structure when doing homework on a deal with the charity to administer a pandemic grant program for student volunteers.

On Tuesday, MPs on the House of Commons ethics committee posed questions about this change as well as why government's contract with WE was not directly to the charity, but with a separate corporate entity called WE Charity Foundation.

Those issues were simply not flagged, Shugart replied.

"I think knowing in retrospect what we know now, we probably would have inquired further," he added.

The ethics committee is conducting a review of the existing safeguards in place to prevent conflicts of interest when the federal government decides how to spend taxpayers' dollars.

But opposition MPs focused more pointedly on the government's agreement and dealings with WE Charity leading up to the since-abandoned agreement.

Youth Minister Bardish Chagger, who also appeared Tuesday, said she had a telephone conversation on April 17 with WE co-founder Craig Kielburger, almost a week before Trudeau announced the program. She said this conversation was an unsolicited pitch about a youth social entrepreneurship program.

Asked why she didn't disclose this conversation in a previous appearance at the Commons finance committee, which is also probing the WE controversy, Chagger said the conversation was not about the Canada Student Service Grant.

Employment Minister Carla Qualtrough, whose department recommended WE Charity to run the program, told the committee Tuesday that she learned of the choice just before the proposal was to go to cabinet for approval on May 5.

She said this was because the file fell under Chagger's portfolio as youth minister.

Qualtrough defended the Liberal government's work to help Canadians during the height of the pandemic, but acknowledged this file was not handled properly.

"It was a pandemic and things were crazy and we were going at breakneck speed, but we should have not dropped the ball on this," she said.

"It's an unfortunate situation. I don't think it takes away from the really important, I would say fantastic work, that we have done for students and for Canadians."

Trudeau and Finance Minister Bill Morneau, whose family also has ties to WE Charity, are both under investigation by the federal ethics commissioner. Both have apologized for failing to recuse themselves when cabinet approved the recommended agreement with the charity.

Trudeau has been a featured speaker at six WE Day events and his wife hosts a podcast for the group, for which they have not been paid. However, the charity has covered hundreds of thousands in expenses for Sophie Gregoire Trudeau's as well as speaking fees and expenses to Trudeau's mother and brother for speaking at numerous WE events over the years.

One of Morneau's daughters works for the organization, another has spoken at its events and his wife has donated $100,000. Morneau also revealed last month that he had repaid some $41,000 in expenses that WE had paid for him and his family in 2017 for trips to view two of its humanitarian projects in Ecuador and Kenya.

Qualtrough disclosed Tuesday that she, too, was a guest speaker at one WE Day event in 2016. She said she was not paid and her expenses were not covered.

NDP MP Charlie Angus said he believes this all shows there was a close "comfort level" between WE and senior Trudeau government officials, which he believes led to the current controversy.

"Don't you feel if we had done more due diligence we wouldn't be in this debacle right now?" he said.

This article misleads the

This article misleads the reader into thinking that WE would receive $43 million for administering the program. In fact, the contribution agreement specifies this amount for reimbursement of program expenses, e.g. salaries of program workers, etc. It is not a fee to be paid to the WE organization.