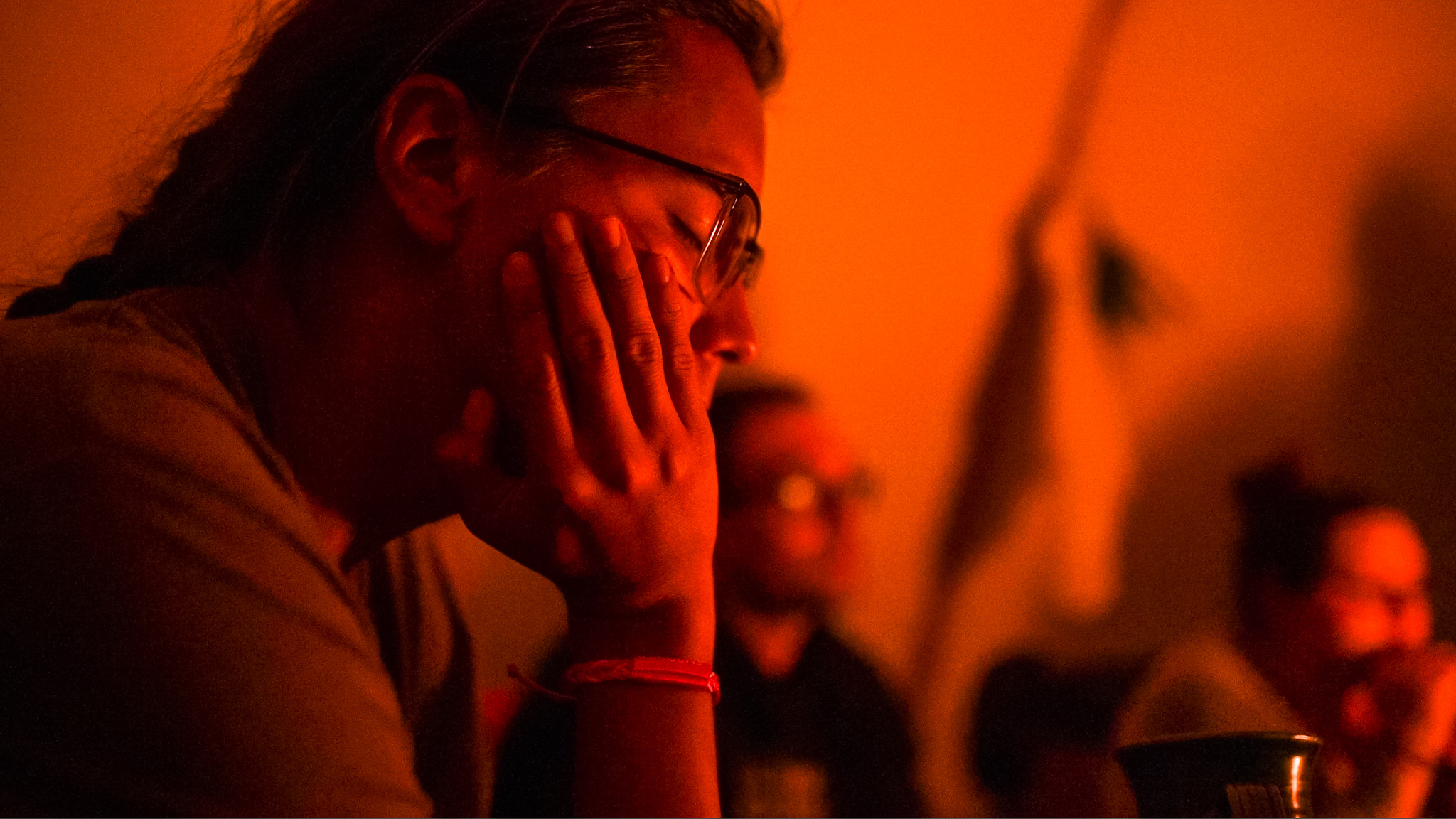 Métis musician Tristen Durocher is in the second week of a 44-day hunger strike to push for more action to combat high suicide rates in northern Saskatchewan.

Durocher walked more than 600 kilometres from La Ronge to the provincial legislature in Regina with a group of supporters and erected a tipi near the building.

Tristen Durocher plays his fiddle at the Saskatchewan legislature in Regina where he hopes the province will change its tune on suicide prevention. Video by Michael Bramadat-Willcock.

Surrounding the tipi are photos submitted to Durocher by families who lost loved ones to suicide.

“We have to ask ourselves why so many people are arriving at a place of such profound hopelessness that they can’t even believe in tomorrow.”

Durocher is a fiddle player from Buffalo Narrows, Sask. He's protesting the government's voting down of a bill put forward by Cumberland NDP MLA Doyle Vermette for a legislative solution to the high suicide rates in the province.

“That should horrify people beyond who they voted for. Beyond the pickets that are on their front lawns. It should just be a human heart to human heart call to action to want to change this,” Durocher said.

“For them to not even let a couple of people from the north camp in a 24-foot diameter space on stolen lands, it’s less than ironic, it’s dark comedy,” Tristen Durocher.

“We have an undeniable right to a quality of life where we can make it to old age without having suicide, also known as hopelessness, be the leading cause of death,” Durocher said.

A delegation of Indigenous leaders spoke in Regina on Tuesday to support Durocher, before he goes to the Court of Queen’s Bench to defend his presence on the legislative lawn on Thursday.

“Public policy in this country, laws and legislation need to change,” he said, calling for a two-way dialogue.

Lac La Ronge Indian Band Chief Tammy Cook-Searson spoke in Cree and English while holding a picture of her sister who died by suicide in 2003.

“She had no hope to keep living.”

“I too was affected by suicide. In 2006, we lost our baby brother Howard to suicide,” Prince Albert Grand Council Chief Brian Hardlotte said.

Hardlotte said his community of Stanley Mission found out about suicide when settlers arrived. He said that since 1975, he has seen the problem worsen.

“I plead to you. Suicide continues to plague our communities. Please help us. Provincial government, federal government, please let's work together.”

Fond Du Lac Chief Louie Mercredi arrived from his far north fly-in community with a group of 25 people impacted by suicide. “We don’t have the tools, we don’t have the funds to save our people. Our elders used to say: We should not be burying our young ones, it should be the other way around,” Mercredi said.

The provincial government has put forward a plan, which it thinks is enough, but critics say that not attaching binding legislation makes it useless.

“The tragic loss of a person by suicide is felt not only by family and friends, but by the entire community. We want to assure the public that suicide prevention is a priority for the government of Saskatchewan,” spokesperson Matthew Glover told Canada’s National Observer in July as Durocher and his supporters walked past Saskatoon towards Regina this summer.

“Brad Wall had a policy in place for northern Saskatchewan in regards to wildfires and the policy was ‘let it burn.’ This ‘let it burn’ policy goes beyond forest fires, it goes to the heart of very lethal human rights violation type living conditions for citizens of this country, citizens of this province and people who are Indigenous to these lands,” Durocher said.

“I consider their lack of action in regards to suicide, despite their capacity to do something and their fiduciary obligations to do something, to be another form of 'let it burn'.”

The government confirmed the meeting in a statement to the press.

“The ministers appreciate Mr. Durocher’s advocacy on this issue and welcomed the opportunity to further this important conversation.”

Kaeding maintains the government's action plan released in May aims to address high suicide rates across the province.

Durocher called the visit “an attempt at condescension and intimidation” and “a disgusting display of indifference and heartlessness” on the part of ministers Carr and Kaeding.

“I respectfully asked them to leave because I was tired of hearing small numbers thrown around, like $1.2 million for their Pillars of Life suicide prevention strategy. (That) probably doesn't cover the travel budget for a handful of psychologists,” Durocher said.

The government said it will continue working to implement Pillars for Life and “engage the FSIN (Federation of Sovereign Indigenous Nations), Métis Nation-Saskatchewan, Northern leaders and front-line workers to seek solutions to prevent suicide in communities across Saskatchewan.”

Durocher said that’s not enough. He called on Kaeding to visit northern Saskatchewan and engage with front-line workers on the ground.

“Why not a consultation with the emergency response teams and the people working on the front lines with the demographics we are trying to save, as is (Kaeding’s) job,” Durocher said.

“It needs to be people who actually work with the demographics we’re trying to save,” Durocher said. “People like this man I met in Montreal Lake who they call Cowboy.

“Cowboy drives around Montreal Lake and he’s on the crisis response team there, and he’s been part of that for many years. He goes to houses when people are ready to commit suicide and he stops them… His voice is very meaningful because he’s experienced that. He’s lived that, and he’s worked that. Those are the voices we need.”

Glover said the five pillars of the plan align with those set out by the Mental Health Commission of Canada and include specialized supports. He said the plan calls for specific engagement with First Nations and Métis leadership as the work progresses.

Durocher is to appear in court on Thursday for allegedly violating municipal bylaws by putting a tipi on the legislative lawn.

He said he intends to file a human rights complaint if he and his tipi are removed.

“They are willing to violate Canada’s Charter of Rights and Freedoms, one of the highest laws, with a municipal bylaw,” Durocher said.

Durocher said forcing him to leave would be a violation of the right to peaceful protest, the rights of Indigenous people to the land and religious practice.

“We’re Indigenous and we have the legal sovereignty and foundational legal base to the lands we occupy and we, through treaties, allowed the settler establishment to exist on the legal foundation that is us and our sovereignty,” Durocher said.

He said it’s insulting that Premier Scott Moe did not meet with him when he arrived at the steps of the legislature, especially because they are being asked to leave without meaningful consultation from land that’s originally theirs.

“For them to not even let a couple of people from the north camp in a 24-foot diameter space on stolen lands, it’s less than ironic, it’s dark comedy.”

“When I was evacuated at that time (the 2015 wildfires) with my friends, we slept in my minivan with family photo albums and the ashes of our grandmothers like we were homeless in Saskatoon, in city parking lots, because of a 'let it burn' policy. That 'let it burn' policy is an overt display of their indifference to the conditions of people in the northern half of this province.”

Glover said that the province has met with representatives of the FSIN and Métis Nation-Saskatchewan to discuss Pillars for Life.

Moe addressed the issue in the legislature in June and called Pillars of Life “the very first steps ... on a journey that we need to travel … together as individuals in communities right across this province.”

Durocher is urging voters to remember this when elections happen in November.

“The public will be voting in November and I hope this is fresh in their minds. That the administration that could have ended this any day chose not to,” Durocher said.

“Casting a vote for politicians whose indifference goes to the depths of being lethal is not only irresponsible, it’s criminally negligent,” Durocher said.

Suicide has walked with me

Suicide has walked with me too. A friend hung herself in grade five as did a beloved grade 3 teacher in a school I taught. No words can reconcile these deaths. I am deeply moved by the actions of the indigenous youth of Saskatchewan. I hear you, feel you and walk with you. You are not alone.

As a white man in BC, there

As a white man in BC, there was no room for me in the mental health system when I was not at risk of suicide. In Saskatchewan, care once included feeling less desperate, but that counsellor was then micromanaged into quitting, and replaced by Dunning-Kruger victims.

Canada does not even care about missing and murdered native men and boys, who are twice as numerous as the women and girls documented in the recent Inquiry. Those numbers might be considerably higher if fewer deaths were dismissed as suicide to save investigations.