WE Charity registers as lobbyist, lays off staff 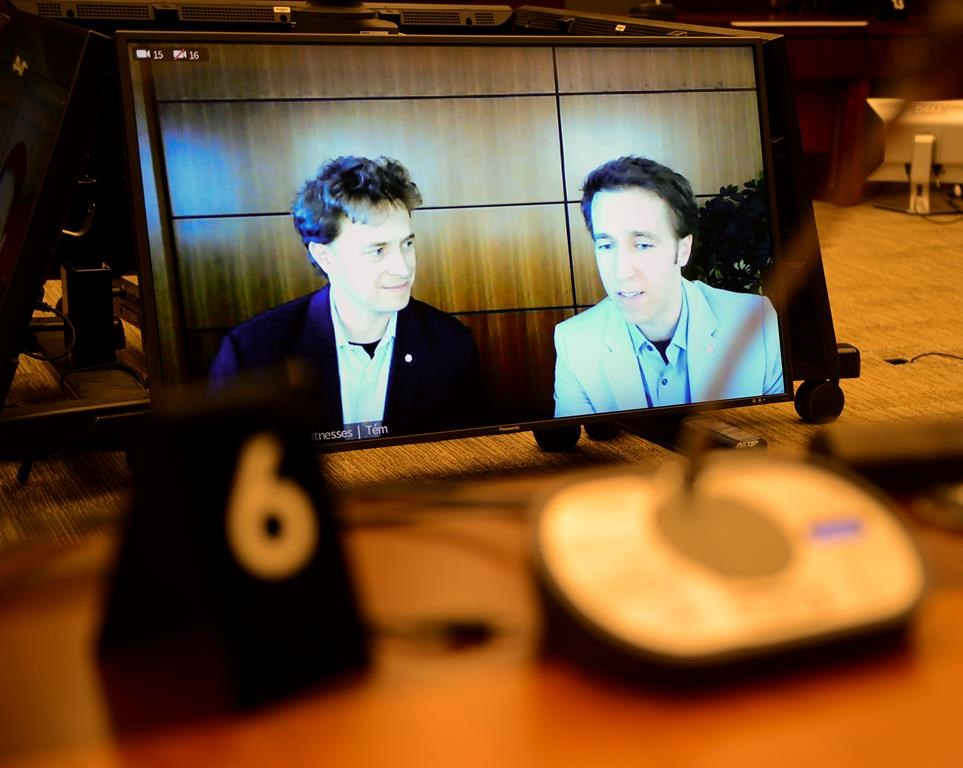 Marc Kielburger, screen left, and Craig Kielburger, screen right, appear as witnesses via videoconference during a House of Commons finance committee in the Wellington Building in Ottawa on July 28, 2020. File photo by The Canadian Press/Sean Kilpatrick
Previous story

WE Charity registered Thursday as a lobbyist of the federal government — months after it began talks with federal officials about potential programs to help Canadian youths during the COVID-19 pandemic.

The organization's executive director, Dalal Al-Waheidi, disclosed the registration during testimony before the House of Commons finance committee, which is probing the controversy surrounding the Liberal government's decision to pay WE Charity up to $43.5 million to administer a now-abandoned student grant program.

The controversy has triggered investigations by the federal ethics watchdog into potential breaches of conflict of interest rules by Prime Minister Justin Trudeau and Finance Minister Bill Morneau, both of whom have close family ties to WE Charity.

And it was blamed at least in part for WE Charity's announcement earlier Thursday that it is scaling back its operations, making dozens of layoffs in Canada and the United Kingdom, while also looking to sell some of its real estate holdings in Toronto.

WE Charity said its financial position has been greatly affected by the COVID-19 pandemic and "recent events," prompting it to shift programming and reduce staff.

In its filing to the federal lobbyist registry, WE Charity disclosed 65 communications with federal officials or ministers in 19 different departments or federal institutions, dating as far back as January 2019.

It lists 18 individuals, including Al-Waheidi, as in-house lobbyists for the organization. Craig and Marc Kielburger, the brothers who founded WE charity, are not listed even though they have talked to ministers.

Youth Minister Bardish Chagger's office immediately reported at least one other inaccuracy in the registration to the lobbying commissioner.

Chagger has testified she had a phone conversation with Craig Kielburger on April 17 about an unsolicited WE proposal for a youth entrepreneurship program, which was ultimately rejected by the government. She said no one else from her office was involved in the call. The charity's report says her chief of staff and others were there.

The Lobbying Act requires an organization with in-house lobbyists to register within two months of the time when at least one full-time employee spends at least 20 per cent of his or her time in lobbying activities.

WE Charity registered on Thursday, August 13, 2020, as a lobbyist of the federal government — months after it began talks with federal officials about potential programs to help Canadian youths during the COVID-19 pandemic.

"It's an incredible coincidence that your organization has suddenly registered to lobby all of these months after all of the lobbying happened," Conservative finance critic Pierre Poilievre told WE Charity representatives at the committee.

Al-Waheidi, who as executive director was the person responsible for registering, said that had WE Charity considered it necessary to register before now, it would have done so. In previous years, she said the organization spent "minimal" time lobbying the federal government, estimating the cost of such activities at one to three per cent of its budget.

More than half of the group's reported communications took place from April to June, primarily with officials in Employment and Social Development Canada and Morneau's office. The reports accompanying each communication do not go into details, other than to say "employment and training" was discussed.

Ministers and federal bureaucrats have testified they had some discussions with WE Charity in April about an unsolicited youth entrepreneurship proposal the Liberal government ultimately rejected.

From late April to the end of June, communications were presumably about the doomed Canada Student Service Grants program, which was supposed to encourage students to volunteer for community service related to the COVID-19 pandemic.

The reports include a May 5 communication with Rick Theis, director of policy and cabinet affairs at the Prime Minister's Office.

Sofia Marquez, former head of government and stakeholder relations for WE Charity, told the committee Thursday that communication involved a 30-minute phone call in which she updated Theis on the progress in setting up the grant program.

Trudeau said he didn't learn of the charity's involvement in the program until May 8, when he asked bureaucrats to conduct further due diligence as to whether the organization was the best vehicle for delivering the grants. Cabinet approved the agreement May 22.

Trudeau and Morneau have both since apologized for not recusing themselves from the cabinet decision.

During her testimony, Al-Waheidi said the controversy has had a "devastating" impact on the charity.

"It is easy to tear things down," she told the committee. "But I can tell you from personal experience that it's not easy to build."

Over its 25 years, she said the charity has "made it cool for kids to care," inspiring more than one million Canadian youths to volunteer 70-million hours of their time to more than 3,000 causes. It has also helped build 1,500 schools and classrooms in poor countries, where more than 200,000 children have been educated.

The controversy over the student grant program has put all that in jeopardy.

The organization announced hours earlier that 16 full-time employees at its Toronto headquarters will be laid off. Another 51 employees working on fixed-term contracts with the charity won't have them renewed when they expire at the end of the month.

WE Charity's U.K. operations will be centralized in Canada, which means 19 full-time and contract employees in London will be laid off.

The changes come after weeks of intense public scrutiny of WE Charity, its affiliated for-profit organization, ME to WE, as well as the family ties between the WE organization and Trudeau and Morneau.

Last month, WE Charity voluntarily suspended all of its Canadian corporate and school board partnerships after many announced they were cutting ties with the organization.

The charity has also cancelled all "WE Day" activities for the foreseeable future and is shifting its WE Schools learning programs to a digital-only format.

Al-Waheidi said in a statement that the resulting hit to the charity's financials, coupled with the effects of the pandemic, has prompted a need for change.

"We believe now more than ever in the importance of the work that WE Charity is focused on and have confidence that by streamlining our operations in this way, and renewing our focus on international development, we will find a path forward."

The charity plans to keep its headquarters, known as the Global Learning Centre, on Queen Street in Toronto, but other real estate holdings will be assessed by the organization to determine which ones could be sold.

This includes a number of buildings on a block near Moss Park in Toronto acquired by the charity as part of a 25th anniversary plan to create a "campus for good," that would have provided free space for youth-led not-for-profits and social enterprises.

The government had budgeted $912 million for the program but the agreement to have WE Charity administer the program pegged the cost at $543 million. WE Charity was to be paid up to $43.5 million under the agreement, which stipulated that the organization could not make money on the deal.

Scott Baker, WE Charity's chief operations officer, told the committee that the organization has given back $22 million and is in discussions with the government about returning the remaining $8 million as quickly as possible. He said all the money was put into a separate bank account and was never touched.

Al-Waheidi said WE Charity began working on implementation of the grant program on May 5, more than two weeks before its involvement was approved by cabinet. She said the charity understood the risk it was taking in trying to get a head start but believed time was of the essence.

She added that WE Charity is not asking the government to reimburse it for any of the eligible expenses incurred.

This report by The Canadian Press was first published Aug. 13, 2020.

Trudeau denies Bill Morneau to be fired as finance minister