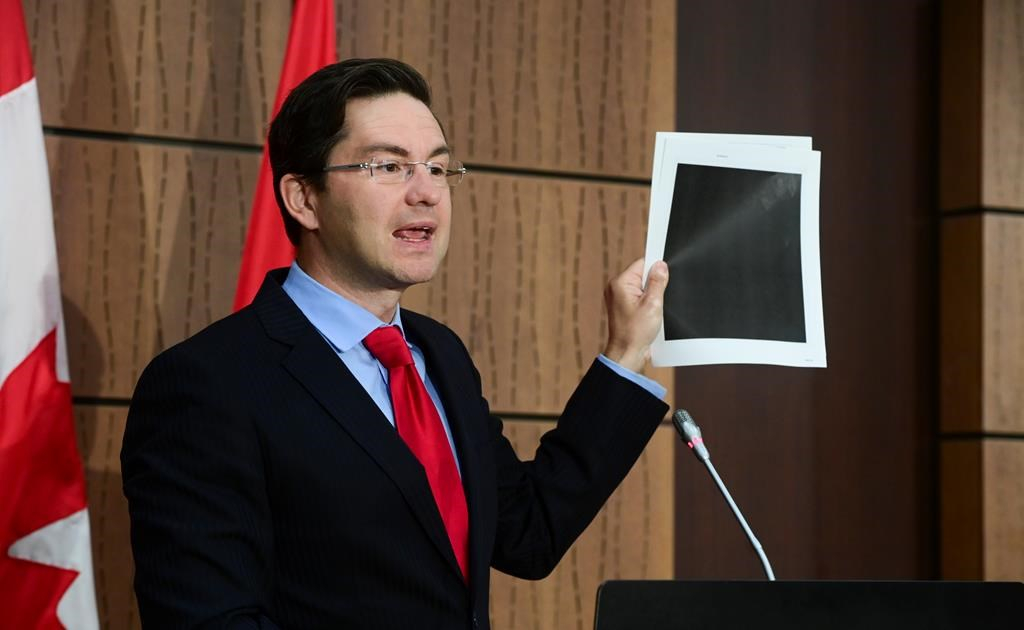 Conservative MP Pierre Poilievre holds up redacted documents during a press conference on Parliament Hill in Ottawa on Aug. 19, 2020. Photo by The Canadian Press/Sean Kilpatrick
Previous story
Next story

Prime Minister Justin Trudeau ordered the 5,000-plus pages released to MPs on the House of Commons finance committee Tuesday as he announced the prorogation of Parliament until Sept. 23.

The documents contain numerous exchanges between federal civil servants, ministerial staff and WE Charity officials about the plan to have the Toronto-based organization run a multimillion-dollar program encouraging students to volunteer during the COVID-19 pandemic.

The Canada Student Service Grant program gradually took shape over a period of weeks, initially including the possibility of a scholarship or bursary, and eventually fixed sums linked to the number of hours spent volunteering.

By proroguing Parliament, Trudeau put a temporary end to the four committees that have spent the summer probing the decision to enlist WE Charity, which has close connections to the families of the prime minister and Bill Morneau, who resigned as finance minister this week.

The newly released documents seem to back up the Trudeau government's assertion it was federal public servants who recommended the student service grant program be administered by WE Charity.

They also suggest bureaucrats may have been encouraged to pursue that course by their political masters.

Yet many of the pages have been blacked out, either in part or in their entirety.

In a letter to the clerk of the finance committee that was released with the documents, the clerk of the Privy Council said the redactions were made in accordance with the committee's own decision to protect cabinet secrets and personal information.

"The committee's motion stipulates that cabinet confidence and national security information are to be excluded from the package," Ian Shugart wrote to committee clerk David Gagnon on Aug. 7.

"A principled approach was adopted to this information to ensure a non-selective application of the protection afforded by cabinet confidentiality. As a result, considerable information on the Canada Student Service Grant that would otherwise constitute cabinet confidences is being released."

Shugart went on to say that information on the pages was withheld if deemed not relevant to the grant program.

Still, the redactions emerged as a focal point for opposition anger and frustration on Wednesday, with Conservative finance critic Pierre Poilievre waving several partially and completely blacked-out pages during a news conference on Parliament Hill.

Among the documents that Poilievre focused on was an email that WE co-founder Craig Kielburger sent to Morneau on April 26 with two attached documents, the contents of which are withheld.

"We'd love to learn about the attached documents in it, but unfortunately, in what is to become a trend throughout this package, all the relevant information in the two documents are completely blacked out," Poilievre said.

Poilievre held up several other redacted documents before tossing them aside.

The New Democrats also complained about the documents Wednesday, with NDP finance critic Peter Julian writing a letter to finance committee chair and Liberal MP Wayne Easter arguing it wasn't up to the government to make redactions.

Rather, he said the committee's motion had called for the government to provide unredacted documents for the parliamentary law clerk to vet, with the understanding members would then be able to challenge redactions they thought were excessive.

"Nearly a quarter of the documents provided to committee members were redacted in whole or in part," Julian wrote. "It is over 1,000 pages that we as parliamentarians do not have full access to shed light on this scandal."

MPs on the finance committee actually received late Tuesday a second version of the same documents, which had been undergoing vetting by the parliamentary law clerk since they were submitted to the committee Aug. 9.

That version redacted all the names and email addresses of bureaucrats so that it is impossible to tell who wrote what or who was talking to whom, which rendered them far less informative than the set Trudeau ordered released.

Easter said he does not fault the law clerk for being cautious, but the end result rendered the documents essentially useless.

"Our intent as a committee in terms of the motion was (to find out) who's talking to who and what time did they talk to who and what did they say. So without the names they're not going to be very effective for you, if at all," Easter said.

If not for Trudeau ordering release of the documents as originally submitted to the committee, Easter said, there would have been far less information available.

This wanna-be scandal is

This wanna-be scandal is really the only thing keeping the opposition parties in the news. I’m still pissed students got nothing and a charity is in ruins purely for useless political points.

I guess it's nice to know for

I guess it's nice to know for sure that the Liberals are just as slimy as the Conservatives. They literally just exchange scripts when they flip from government to opposition and back. Prorogue Parliament, make noises about transparency, redact documents, disappear political liabilities.

Wake up Canada! We are ruled by a bunch of unopposed criminals.

When I look at Bill Morneau

When I look at Bill Morneau background I conclude that the wrong person stepped down...our snow boarder ,French teacher would have been 'less missed'...He chose to support/purchase a tar sands pipeline after making a knee jerk decision without ever allowing his own engineers/scientists to educate him about the crazy TMX plan .After telling us that Cabinet decisions are based on science ,he appoints a prestigious research doctor as the Chief Science Advisor ,one well versed in risk analysis but never lets her review the risk potential of adding tankers to coastal shipping lanes and Canada's busiest harbour...Recall one of his 'choicest' lies,he tells us that "governments issue permits and communities give permission" and never seeing an independent risk assessment of coastal tanker routes or hearing any agreement from potentially impacted southern BC communities he blunders ahead ,and purchases the ill-- fated TMX. Then he fires 2 senior Cabinet Ministers to protect his seat in the upcoming Federal election...and we've yet to hear the complete WE story !
Yes, these are difficult times and a leader with just sow board and French language skills are not enough...hopefully Christea will help us out of the Liberal mess up !
Carl Shalansky ,P. Eng. (retired)
North Vancouver,BC

You all need to have a

You all need to have a serious look at with what and whom you align yourselves . https://fairpress.ca/the-attempted-murder-of-the-kielburgers/