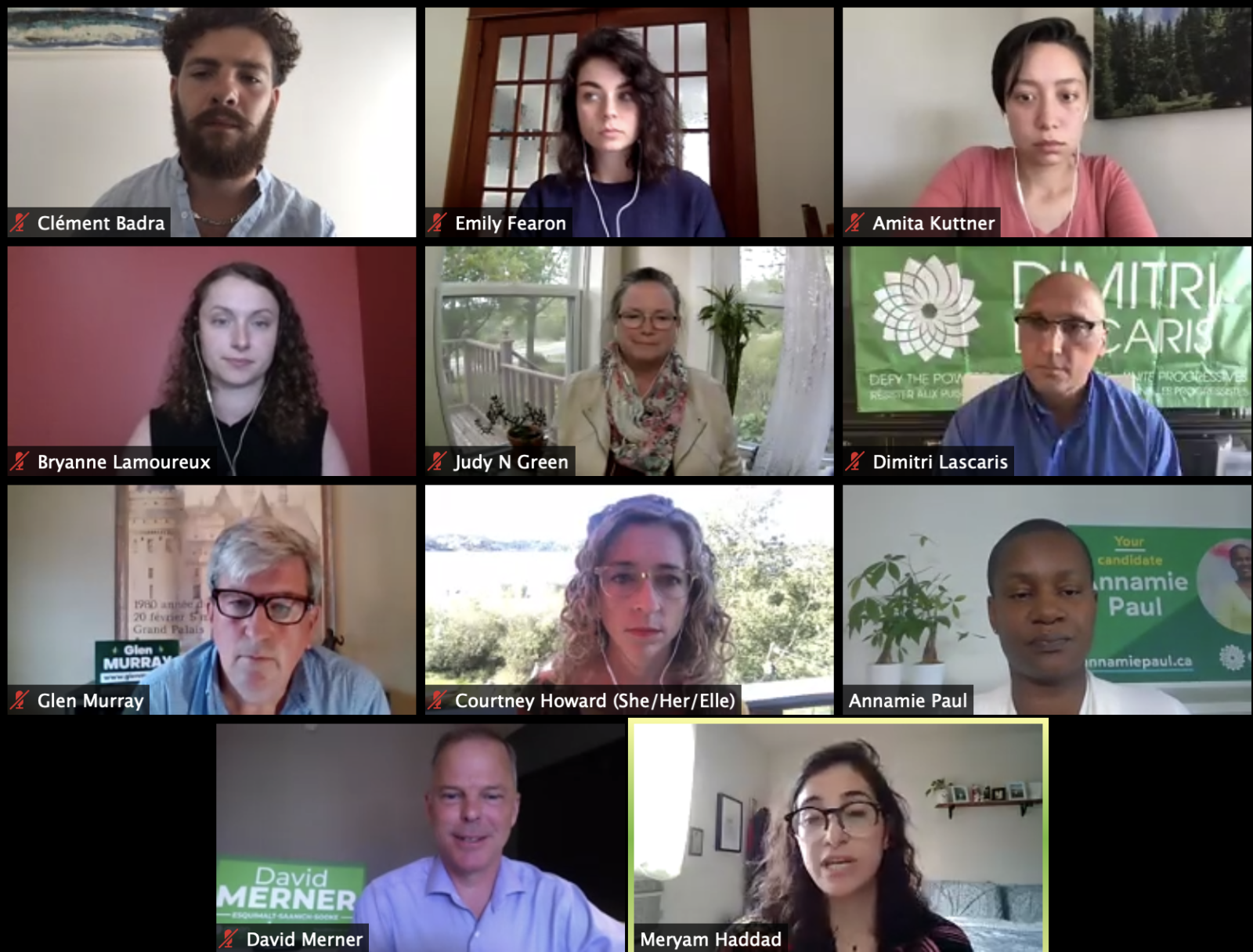 Contenders for the leadership of the Green Party of Canada answer questions submitted by young members of the party on August 23, 2020. Screenshot of video conference call
Previous story
Next story

Green Party contenders to the crown of Elizabeth May sought to woo the youth vote on Sunday as Canada's federal Conservatives prepared to announce their new leader ahead of a possible snap election.

The choice was stark in a crowded field of nine Green Party of Canada candidates; keep on the path of moderation that garnered three seats last time around (the party's best ever election result), or make a bold move to set itself apart from bigger parties that have embraced aspects of its founding environmentalism amid a climate emergency.

On one end of the spectrum, Dimitri Lascaris proposes the party shift to the left after a decade of centrist policies, saying he joined the party after concluding that the current economic system is a primary cause of climate inaction.

“It’s an inhumane system, an extractive and unequal economic system that has concentrated unimaginable wealth in the hands of the few,” he said, noting that as leader he would propose a 100 per cent tax on income over a certain, unspecified level.

Conversely, Andrew West argued the party had “great policies” and should present itself as a moderate option in order to make further electoral gains.

“I’ve been running on a moderate plan, one that prioritizes our great progressive policies but frames them in a way that is fiscally responsible,” West said, noting he wanted to leave future generations with an inhabitable planet while avoiding insurmountable debt.

The candidates were responding to some of the more than 150 questions young people submitted to the party's youth council, including about how each of them planned to rebuild the economy in the wake of the COVID-19 pandemic.

The distance between the positions of Lascaris and West demonstrated a party at a turning point as it looks to replace May, who stepped down last November after 13 years at the helm.

Several other candidates called out the party for having ignored the voices of youth, who had taken to the streets in massive numbers prior to the COVID-19 pandemic and should be natural allies of the environmentalist party.

“We have to recognize that for so long this party has been terrible to youth,” said Amita Kuttner, one of the younger candidates in the race. “It's about being a party and a movement where youth are an integral part of everything,” Kuttner said.

In an otherwise fairly collegial debate organised by the party's youth council, Kuttner called out another candidate, David Merner, for having run a youth engagement program that estranged some participants.

“I'm sorry David but I know that on your campaign people were hurt and people came away from it not wanting to be in politics anymore,” said Kuttner, who identifies as non-binary and uses they/them pronouns.

Merner acknowledged the youth-run program had some problems and said the campaign has learned from the experience.

“For me personally, being queer, being trans, being racialized, none of that has been easy,” Kuttner said, calling for the party to work harder to be inclusive.

“I not only know the experience of being ignored and tokenised for being young, but the racism, misogyny, homophobia and transphobia that have all shown up in my face,” they said. “This is why we fight.”

Annamie Paul said young people involved in her campaign complained of being ghettoised within the party and struggling to be heard.

“Young people are leaders, and if you open the door even a tiny bit they're really going to rush in because they have a hunger and a stake in the future,” she said, arguing that more diversity leads to more equitable policy.

“If you have more women, more youth, more people of colour, more marginalised people at the table it's much less likely that they get forgotten when you're creating policy,” she said.

Judy N Green suggested a mentorship program to better integrate the young wing with the rest of the party. She also called for free post-secondary tuition and student debt forgiveness, as well as support to help young people get involved in regenerative agriculture.

Courtney Howard, a medical doctor, argued that companies get in the way of evidence-based policy and proposed a one-to-one ratio of nonprofits and corporations in federal lobbying.

Unsurprisingly, all the candidates agreed on the need for urgent action to confront the climate crisis, and all also embraced the party's push for a universal basic income as a way to tackle growing inequality.

Glen Murray, Ontario's former environment minister, put more meats on the bones of that idea, saying he had a policy ready to go that would eliminate 80 per cent of Canadian poverty within three months.

Lascaris and Meryam Haddad meanwhile pushed beyond basic income, arguing that Ottawa should guarantee everyone a job, and Merner said he would revive an old idea to build an east-to-west electricity grid, which he said would be the largest job creation project in Canadian history.

People aged 14 years or older who wish to vote in the Green leadership contest have until Sept. 3 to become a member in good standing. Online voting opens on Sept. 26 and closes Oct. 3.

The Green Party debate comes as the Conservatives prepared to unveil the leader who will take them into the next election following the resignation of Andrew Scheer in the wake of his 2019 defeat.

The next election could come sooner than the Greens (and even the Conservatives) might like, after the Liberal minority government prorogued Parliament earlier this month. That means they will seek to reset their priorities and will need to win the confidence of the HOuse next month to avoid a snap election.

Kuttner implored young people to ignore anyone telling them to wait their turn or that they are not ready to get involved.