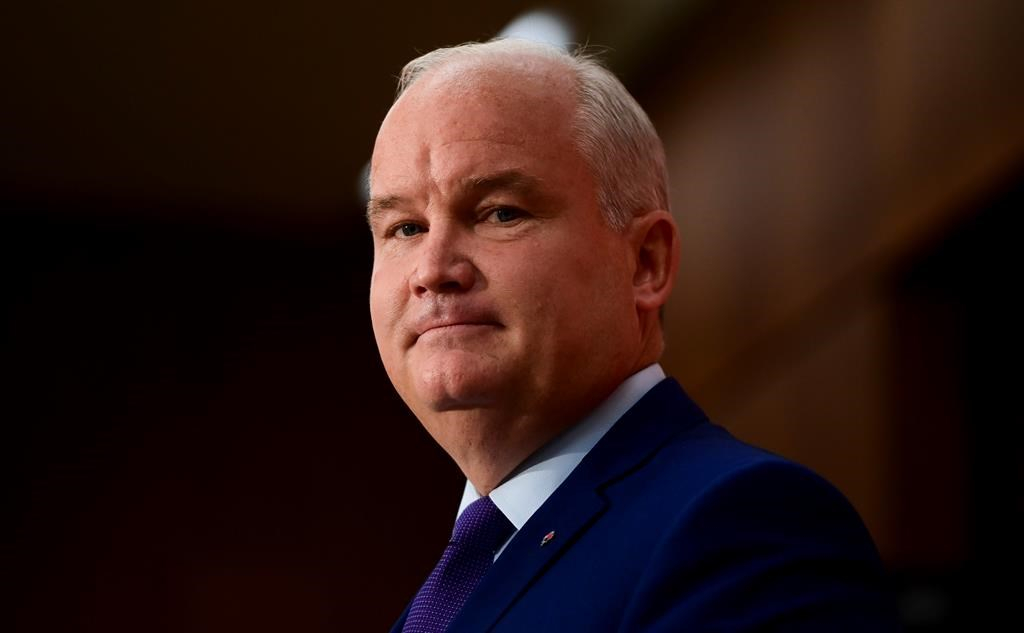 Newly minted Conservative Leader Erin O'Toole's ability to manage social conservatives in his caucus and party will be put to an early test this fall when the Liberal government reintroduces legislation on medical assistance in dying.

And it will be tested again when the government reintroduces a bill to ban conversion therapy, a discredited and traumatic practice aimed at repressing non-heterosexual behaviours or to make a person's gender identity match the sex assigned at birth.

Both bills are controversial among social conservatives, who proved to be a decisive factor in O'Toole's victory early Monday in the Conservative leadership race.

And O'Toole himself has raised concerns about them, notwithstanding his declared position as a pro-choice Conservative and LGBTQ rights advocate.

O'Toole has promised to put an end to the ambiguity on issues like abortion and gay rights that bedevilled his predecessor, Andrew Scheer, while respecting the right of social conservatives to express their views.

He'll get a chance to square that circle this fall as the government rushes to pass a bill to amend the law on assisted dying to conform with a court ruling last fall, which struck down a provision that allows only individuals already near death to end their lives with medical help.

The bill was first introduced in February but it was still in the initial stage of the legislative process when Parliament was adjourned in mid-March due to the COVID-19 pandemic.

It died on the order paper when Prime Minister Justin Trudeau prorogued Parliament last week but the government intends to reintroduce it shortly after Parliament resumes on Sept. 23.

The court, which initially gave the government six months to change the law, has since granted two extensions. The government now has until Dec. 18 and Justice Minister David Lametti's office says the government is determined to meet that deadline.

"Our government has every intention of meeting the court's deadline," said spokeswoman Rachel Rappaport.

Newly minted Conservative Leader Erin O'Toole's ability to manage social conservatives in his caucus and party will be put to an early test this fall when the Liberal government reintroduces legislation on medical assistance in dying.

O'Toole voted against the original bill that legalized assisted dying following a landmark Supreme Court ruling on the subject. In his leadership platform, he courted social conservatives by promising to protect "the conscience rights of all health care professionals whose beliefs, religious or otherwise, prevent them from carrying out or referring patients for services that violate their conscience."

That promise flies in the face of a unanimous Ontario Court of Appeal ruling in May 2019, which said doctors who have moral objections to providing health services like abortion or assisted death must provide patients with an "effective referral" to another doctor.

Conservative MP Derek Sloan, an avowed social conservative who finished last in the four-person leadership contest, went a step further in his platform. He promised to claw back equalization payments from provinces that don't guarantee the conscience rights of health care professionals.

Leslyn Lewis, another unabashed social conservative who finished a strong third in the race, promised to stop the expansion of assisted dying to "new categories" of Canadians.

Between them, Lewis and Sloan scooped up more than 40 per cent of the votes cast. When they were dropped off the ballot, thousands of their supporters moved to O'Toole, propelling him to a decisive third-ballot victory over Peter MacKay.

At his first news conference Tuesday since winning the leadership, O'Toole brushed off a Liberal dare to prove he's not in the pocket of social conservatives by booting Sloan out of the Conservative caucus.

Liberals accused Sloan of having made anti-choice, anti-LGBTQ comments, among them that the bill to ban conversion therapy is tantamount to legalized "child abuse."

That bill was introduced in March, one week before Parliament was adjourned for the pandemic. There is as yet no timetable for reintroducing it but Rappaport said, "we will absolutely be moving forward with that commitment."

Some nine municipalities, including Calgary, Edmonton and Vancouver, have passed bylaws banning conversion therapy. Ottawa city council is to vote on a motion today urging the federal government to quickly reintroduce the bill to ban the practice nationally.

Rappaport said the Liberal government hopes "all political parties will join us in defending the rights of LGBTQ2 Canadians and unequivocally support a ban on conversion therapy."

But if O'Toole is true to his word to respect the views of Sloan and other social conservatives in his caucus, unequivocal Conservative support for the bill is unlikely.

O'Toole himself raised eyebrows during the leadership race when he appeared to suggest that the bill doesn't respect the right of religious leaders to have conversations with "members of their flock" about sexual orientation or gender identity.

His campaign later clarified that O'Toole supports a ban on "coercive, degrading actions that seek to change a person's sexual orientation or gender identity" but has concerns about the way the legislation was drafted.

This report by The Canadian Press was first published Aug. 26, 2020.