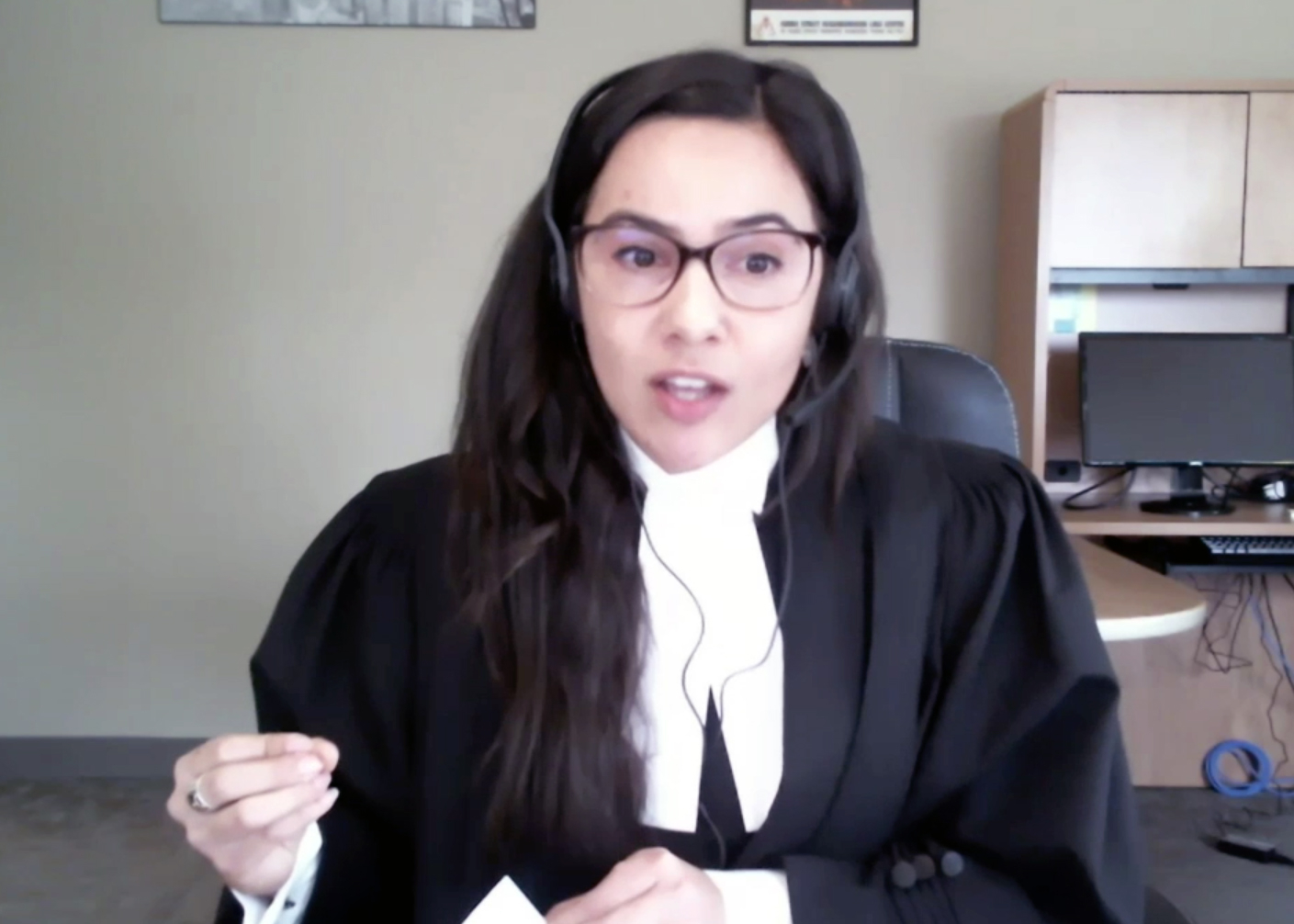 Joëlle Pastora Sala, an attorney for the Public Interest Law Centre in Manitoba, which is representing the Assembly of Manitoba Chiefs, presents to the Supreme Court on Sept. 23, 2020. Photo SCC screenshot
Previous story
Next story

Several First Nations asked the Supreme Court of Canada on Wednesday to look beyond intergovernmental clashes over the carbon tax, and recognize that the climate crisis infringes on treaty rights.

After two days of hearings, the court said it was reserving its judgment, meaning the justices will take some time to consider the issues further before releasing a ruling.

The Supreme Court is considering the constitutionality of the federal government's Greenhouse Gas Pollution Pricing Act, which since 2019 has required provinces to either design their own pollution-fighting regimes that meet minimum standards, or accept a federal program that does.

Saskatchewan and Alberta, which asked appeals courts to rule on the issue along with Ontario, argued Tuesday that the federal government already has all the power it needs to regulate carbon pollution. Ottawa could either make it illegal to pollute under the criminal code, or tax it directly using its taxation powers, they said.

British Columbia, which is intervening on the side of the federal government, argued that Canada's status as a sovereign country afforded it greater latitude, given the nationwide consequences of provinces failing to deal effectively with their emissions.

As for criminalizing carbon pollution, B.C. said that would intrude on provincial autonomy to a much greater degree than the carbon pricing system does, and yet it would be a much less efficient way of dealing with the problem, as Canadians would try to avoid getting caught.

While the first day focused primarily on questions of provincial jurisdiction when it comes to regulating carbon pollution, with extended conversations concerning the balance of powers in the Constitution, several lawyers from a long list of intervenors on Wednesday asked the court to take a broader range of factors into account.

Joëlle Pastora Sala, an attorney for the Public Interest Law Centre in Manitoba, which is representing the Assembly of Manitoba Chiefs, said the carbon pricing case presented an opportunity for the justices to “clarify the existence of First Nations laws as independent from Euro-Canadian laws.”

Indigenous peoples have had their own legal systems based on various traditions that have often been ignored under colonialism, according to the Law Commission of Canada.

Several First Nations asked the Supreme Court of Canada on Wednesday to look beyond intergovernmental clashes over the carbon tax, and recognize that the climate crisis infringes on treaty rights.

“Governments and courts can no longer ignore the existence and insights of First Nations laws. Ignoring this reality fundamentally impairs reconciliation and the spirit and intent of treaties,” said Pastora Sala.

She said the three carbon tax appeals cases from Alberta, Ontario and Saskatchewan have “entirely ignored the existence of First Nations laws and the original intent of treaties,” and that the courts were succumbing to the temptation of focusing “narrowly” on the division of powers.

“But is that not the reference question which was put to the court? Is it not our responsibility to answer the question, which was posed to us?” asked Justice Malcolm Rowe.

“Governments and courts will continue to ignore First Nations laws if this court does not pronounce themselves on (their) importance,” Pastora Sala responded. “Reconciliation, which is about an ongoing process, establishing respectful relationships, will not happen.”

“I’m afraid that we have to maintain our role as a court, and not become some super-legislative institution. If we lose our footing as a court, we abandon our proper role in the separation of powers,” Rowe also told her.

But Pastora Sala said that, in the spirit of reconciliation, and facing such a fundamental issue, “it is no longer acceptable to exclude First Nation laws. The status quo cannot stand, and reconciliation demands more.”

The difference between Vancouver and Mexico City

Patricia Lawrence, senior counsel with Westaway Law Group representing the Anishinabek Nation and the United Chiefs and Councils of Mnidoo Mnising, who jointly spoke on behalf of 39 First Nations throughout Ontario, said greenhouse gas emissions and climate change “pose a very real threat to our clients’ ability to continue to exercise the Aboriginal and treaty rights” under Section 35 of the Constitution.

If the Supreme Court were to find that the federal government’s Greenhouse Gas Pollution Pricing Act was beyond the powers of Parliament, that would “leave our clients’ constitutional rights subject to the whim and political will of individual provinces,” said Lawrence.

University of Ottawa law professor Amir Attaran, representing the Athabasca Chipewyan First Nation, near the northern Alberta oilpatch, said hunting, fishing and trapping are “existential” to the nation’s culture, and climate change is now threatening that way of life.

“Scientists predict that my clients’ northern homeland by the end of the century will warm as much as seven degrees,” the difference between Vancouver and Mexico City, he said.

The Assembly of First Nations (AFN) believes the carbon pricing regime is within Parliament’s jurisdiction, said Stuart Wuttke, AFN general counsel. He also said justices need to examine Indigenous rights in the Constitution as part of the case.

He also pointed out that the provinces “do not owe any obligations to First Nations in another province,” so if a province fails to act on curbing emissions, “the impacts are real for First Nations communities, and governments in other locations across Canada.”

There was also a tense moment on Wednesday when one of the intervenors appeared to faint in front of the podium as she was preparing to offer remarks to the justices.

Lisa DeMarco, who was there on behalf of the International Emissions Trading Association, introduced herself and then asked if she could sit down. A few seconds later, she collapsed, and the court quickly suspended.

“During the hearing today, counsel Elisabeth DeMarco had a medical emergency. She has been transported to hospital for further checkup,” confirmed Rémi Samson, senior legal officer for the chambers of Chief Justice Richard Wagner.

“When she left the court, Ms. DeMarco appeared to be well. The court wishes her a prompt recovery.”

Editor's note: This story was updated on Oct. 14, 2020 at 2:59 p.m. ET to include an additional representation for Lawrence's appearance.