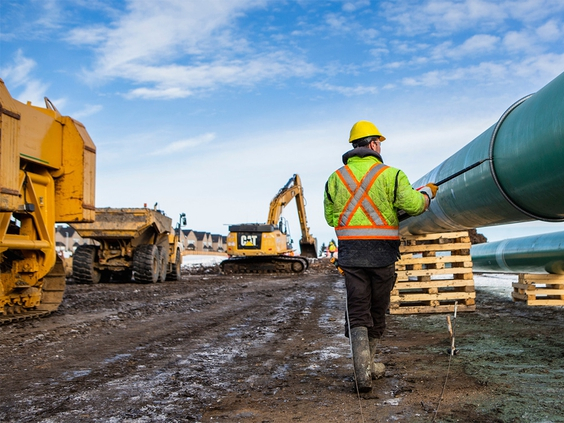 The Trans Mountain pipeline expansion project is currently scheduled to be finished at the end of 2022. Photo from Trans Mountain/Twitter
Previous story
Next story

Last week, Trans Mountain said its pipeline expansion project is on schedule to be done by the end of 2022.

But the environmental non-profit Wilderness Committee says it appears Trans Mountain has missed its window to start key construction work in the Lower Mainland of British Columbia, meaning the project is at risk of at least a two-month delay. And that’s if everything else goes perfectly ⁠— if not, it could be up to 14 months late.

“This is a taxpayer-funded project, and every delay makes the project cost more and makes it less economically viable,” said Peter McCartney, a campaigner with the Wilderness Committee, a group that has been advocating to kill the project.

“We still have time to abandon this and take another look at it and actually make sure that it makes sense for Canadians, because I don’t think it does.”

“We remain on track for our expected in-service date of December 2022,” Trans Mountain said in an emailed statement.

The Trans Mountain pipeline expansion, or TMX, is a twinning of an existing pipeline running from the Edmonton area to a shipping terminal in Burnaby, B.C. In February, revised estimates showed the costs of the federally owned project had jumped to $12.6 billion, a 70 per cent increase from its previous 2017 cost estimate of $7.4 billion.

As proof TMX is running behind, the Wilderness Committee points to the Crown corporation’s sworn statements to federal regulators, and its publicly posted construction plans.

In an affidavit filed with the Canada Energy Regulator on May 11, during hearings over the final route of the pipeline, Trans Mountain expansion project executive vice-president David Safari outlined work that needed to be done on a section of the project called “Spread 7,” which runs through Surrey, B.C. — including some waterways.

The conditions around Trans Mountain’s approval to build the pipeline expansion project dictate that work in those areas be done in a tight window in which the risk to fish is minimal, from Aug. 1 to Sept. 15.

That work will take two construction seasons ⁠— ideally, in 2020 and 2021, the affidavit said.

Will TMX be finished on time? The Wilderness Committee says Trans Mountain's construction plans and sworn affidavits indicate it could be two months late — at least. #cdnpoli

That’s because Trans Mountain must test the pipeline with water, install valves and start flowing crude through it before bringing it fully in service, a process that’s slated to take five months. So work in the Surrey area must be entirely done by July 2022 if Trans Mountain is to deliver the project on time, Safari said.

“If substantial construction progress in these areas cannot be achieved during the 2020 construction season, Trans Mountain’s ability to manage the risks around construction will be significantly constrained, leading to a material risk that the in-service date will be delayed by several months and potentially more than a year,” Safari said in the affidavit.

However, it appears that work did not begin this summer — both Trans Mountain’s website and a schedule it filed to the Canada Energy Regulator on Sept. 1 say work on the stretch of the pipeline that runs through Surrey won’t start until October. That means Trans Mountain missed its six-week window for work near waterways for this year, and won’t be able start in those areas until next August and September.

In that scenario, construction would be finished in September 2022, Safari’s affidavit said. That would be two months late for Trans Mountain’s July 2022 deadline for finishing construction, likely pushing back the delivery date for the entire project.

“With a project of this scope and size, spanning two provinces with hundreds of worksites, we have the flexibility within the schedule to make adjustments in specific areas while keeping to the broader timeline and budget,” Trans Mountain said in a statement.

Trans Mountain did not respond to requests to explain why the work near Surrey didn’t begin this summer, or how the pipeline could still be delivered on time given the timeline outlined in Safari’s affidavit.

In his affidavit, Safari said Trans Mountain has very little wiggle room when it comes to the work in Surrey.

While there is “some flexibility,” he said, that’s in the order of weeks and not months.

“If substantial construction progress in these areas cannot be achieved during the 2020 construction season, Trans Mountain’s ability to manage the risks around construction will be significantly constrained, leading to a material risk that the in-service date will be delayed by several months and potentially more than a year,” the affidavit said.

In his affidavit, Safari warned that TMX could be delayed by up to 14 months if anything else went wrong — something he said was a risk. One of the sites where the pipeline would cross a waterway is expected to have pre-existing contamination issues, which could make Trans Mountain lose an entire construction season, he said.

Safari also said some sections, where Trans Mountain plans to drill horizontally beneath the Fraser River, are particularly precarious. If anything goes wrong, it would mean Trans Mountain might have to move its limited number of drilling rigs to other sections of the project, attempt a second time or seek another way to do the work, which would require federal approval.

“Failure could be caused by any number of reasons — obstructions could be encountered, drill hole could collapse, tools could become stuck, drill mud could frac-out resulting in loss of mud circulation, etc.,” the affidavit said.

Geotechnical data in one spot near the Fraser River is “limited,” Safari said, so it’s possible that crews could encounter “an unforeseen obstruction” and be delayed further.

If those risks materialize and Trans Mountain is unable to finish the waterway work during its six-week window in 2022, it would have to push that back to August and September 2023, Safari said: “The in-service date could be delayed by up to 14 months.”

McCartney said the government should take this opportunity to abandon the project.

“Every delay weakens the case for (TMX) as the world moves on,” he said.

No finishing date is late

... and where to they expect

... and where to they expect to sell the bitumen the pipeline is being built to transport? In 2011 the National Energy Board granted Trans Mountain priority access to the tanker terminal in Burnaby of 79,000 barrels per day so that new overseas markets could be developed. That was nine years ago and no new markets have been developed.

Even the existing market in California shows signs of disappearing. Since 2012 there has been a trend to fewer tanker shipments, and in the five months between April 7 and September 23 this year no tankers went to California.

It's increasingly clear that

It's increasingly clear that this project is based on the deep scientific analysis of wishful thinking. And everyone knows that wishful thinking is a salable commodity in governments, especially those that instantly succumb to industry threats and jump in to purchase a pipeline while preaching about fighting climate change.

Even if TMX was completed, and somehow world oil demand impossibly went up concurrent with an explosion in sales of electric vehicles, cheaper renewables and a giant swing by investors into both, it will still be out-competed by the Louisiana Offshore Oil Port and the largest tankers in the world moving orders of magnitude more high quality petroleum at much lower shipping costs. But even they will undoubtedly feel the mid-decade pinch as land transport moves insidiously into electricity.

It's not too late to make a hard but ultimately wise financial decision to quit the project and develop a plan to assist the oil workers of Alberta, even while Jason Kenney foams at the mouth. The plan should also support the BC clients served by the aged existing TM pipeline make the switch to clean electricity before shutting down the service altogether, with several year's notice given to Washington State refineries. Jay Inslee, the current governor, is a strong advocate for action on climate change and will likely support this decision as long as there is enough lead time to develop alternatives, which may well include purchasing more hydroelectricity from BC under special agreement.

All this will have better and farther-reaching climate and economic results than supposedly using the potentially diminished revenue from the sale of TMX products as advertised to incoherently fight climate change. Funding renewables should occur directly with absolutely no perverse dependence on the sale of oil, especially when obviously done as a post-purchase justification using irrational logic.

Wonderful, and my favorite

Wonderful, and my favorite words in that headline are 'at least'.
The right timeline for the expansion intended to allow for the increased export of dirty tar sands oil to China, is never. Jason Kenney can go to hell and the world will be a far better place.