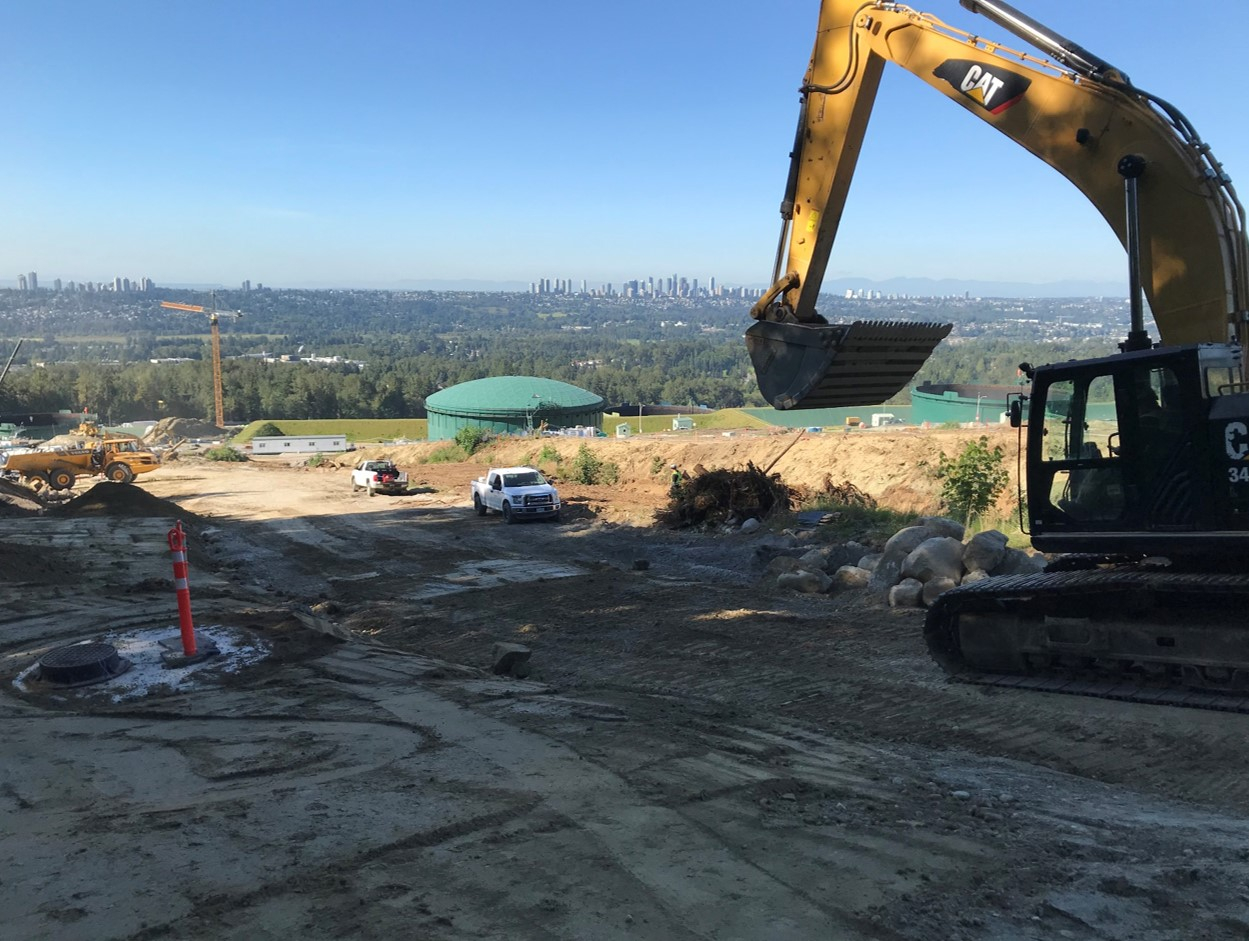 Construction at the Burnaby Terminal with downtown Vancouver in the background. Photo Trans Mountain
Previous story
Next story

Environment and Climate Change Minister Jonathan Wilkinson has talked about using the revenue from the Trans Mountain oil pipeline to pay for green energy projects. But what if that revenue never comes because there’s little demand for oil in the first place?

This week, three big names in the energy world all made bold predictions of a much-diminished future for oil. The large energy company BP shocked analysts when it said it expects oil demand to peak this decade, and never recover, even before factoring in government actions to cut carbon pollution.

Meanwhile, both the Paris-based International Energy Agency and the 13-nation oil export group OPEC slashed their oil demand forecasts, citing a weaker rebound from the COVID-19 economic slowdown than had been expected.

In an open letter to Wilkinson and other cabinet ministers that was published on Thursday, more than 100 Canadian economists and policy experts pointed to the flurry of recent oil market predictions, calling into question the economic viability of the government-owned oil pipeline and its contentious expansion project.

“For a long time, ‘peak oil’ was peak supply — we didn’t have enough oil. And now it’s peak demand, and the reason for that is climate change,” said Thomas Gunton, director of resource and environmental planning at Simon Fraser University, and a former B.C. deputy minister of environment, in an interview.

“It’s unprecedented, really, for one of the largest oil companies in the world to come out with a forecast as pessimistic as BP’s.”

Gunton and other signatories to the letter — including Canada research chairs Carolyn Fischer, Kyla Tienhaara and Nicholas Rivers, former World Bank adviser David Wheeler, and former BC Hydro CEO Marc Eliesen — also point out that, at the same time oil markets are weakening, the cost of the expansion project has climbed.

“We are concerned that the decline in world oil markets and the escalating construction costs have undermined the viability of TMX and put taxpayers’ money at risk,” reads the letter. “Your government has not provided an updated evaluation to justify this investment in light of these deteriorating conditions.”

The authors said they recognize that Albertans are suffering due to the drop in oil prices, and deserve support. But they urged the federal government to choose “more effective ways of directly assisting workers in the oil sector,” such as expanding a program to clean up orphaned and inactive oil and gas wells.

“Trans Mountain is still in its very early stages of development, and so it’s still an opportunity to do a re-evaluation,” said Gunton. “You (the federal government) have a basic obligation to provide a due diligence business case to the public to justify investment of taxpayer funds.”

Environment Minister Jonathan Wilkinson has talked about using the revenue from the Trans Mountain oil pipeline to pay for green energy projects. But what if that revenue never comes, because there’s little demand for oil in the first place?

'There are certainly lots of different forecasts'

In a conference call with media on Thursday, Canada’s National Observer asked Wilkinson if he was concerned that weak oil demand will jeopardize the anticipated tax-related pipeline revenues the Trudeau government is counting on to fund the greening of the economy.

Wilkinson said the government’s promise to use TMX revenues to fund green projects remains the same and it intends to stick by that commitment.

“In terms of world energy demand, there are certainly lots of different forecasts, as you will have seen from different agencies over the past couple of weeks, and certainly from some of the major oil companies,” he said.

Three per cent of new light-duty vehicle sales in Canada last year were zero-emission vehicles, up significantly from two per cent in 2018, but still a tiny fraction of all the cars being put on the road, Wilkinson pointed out.

“We need to ensure that we are aggressively moving in that direction, of more deployment of zero-emission vehicles and gradually reducing all of the emissions associated with transportation. But that will be a process of a number of years before we see that come to some conclusion,” he said.

Up to $50 million over five years will be earmarked for community-based climate action projects, the government said, while the remaining funds will be allocated to increasing youth awareness of climate, advancing climate science, and supporting the work of think tanks and academics studying the transition to net-zero.

The money was drawn from the existing Climate Action Fund, as well as the government’s Environmental Damages Fund.

We haven’t eliminated fossil fuel consumption, but we, and the world can continue to reduce it further.
Arguably, TMX is the only pipeline that makes sense. It has the lowest tolling charges of any of the major pipelines. It is the only pipeline access to the West coast, in Canada or the US. It’s expansion will protect the Fraser and Columbia Rivers from oil train incidents by reducing, or as demand drops eliminating rail.
Energy East, Northern Gateway and perhaps KXL are not, nor will ever be needed.

TMX does not make sense, and

TMX does not make sense, and never did.

As far as I know the National Energy Board never examined the business case by Muse Stancil that was put forward as justification for TMX by Kinder Morgan. Others have and found it wanting.

The toll rates may be low, but that is because they have been artificially set low, almost half what they need to be to pay for the pipeline. We will be paying the rest through our taxes.

It is a toss-up as to whether train or pipeline accidents are worse for the environment. There are fewer pipeline spills but individually they spill more oil. The total oil spilled on a per unit volume and distance transported is about the same.

The real difference may be

The real difference may be that a pipeline spill is often in the back country. Train derailments can happen to city folk. But forgive me if i'm wrong, but does bitumen not travel in an artificial liquid form through the pipelines, but in solid form on rail cars??? If that's true, than from the perspective of the earth, pipelines, like the one that damaged the Kalamazoo River in the U.S., are far worse.

As usual, the devil is in the details we're encouraged to ignore. Bitumen in its raw form isn't oil........and it doesn't flow. What they do to make it flow is in itself bad for the environment.

TMX neverade economic sense. It was a political sop to try to heal wounds of western alienation. It failed on that count and will continue to fail economically. What Alberta needs is an honest facing up to sunset on the oil sands and real support for moving beyond dependence on the oil industry. Politically, that is unsaleable at this time.

Burning fossil fuels to slow climate change is like smoking cigarettes to cure cancer.
Funding the transition to renewables using oil revenues is like drug-dealing to fund hospitals and police.
Wealth that degrades our life-support systems is illusory. The costs of climate change and fossil-fuel pollution are increasingly prohibitive. Hence, the need to shift away from fossil fuels ASAP.

Following that logic, oil producers the world over will boost oil production, creating a glut of cheap oil, and increasing emissions.
Oilsands expansion cannot be reconciled with Canada's inadequate climate targets. Trudeau's Liberals are betting on climate failure. The only scenario in which oilsands expansion makes sense. Out-of-control warming will wreak havoc around the world and doom countless species.
The IPCC warns that we must nearly halve GHG emissions by 2030 and eliminate them by 2050 to keep warming below the danger limit of 1.5 C. The Liberals flout the science.

The decline of oil production will happen at the time and on the schedule of our choosing. Sooner if we price carbon properly. It's entirely up to us.

Why do we not have a

Why do we not have a transition plan with timelines?