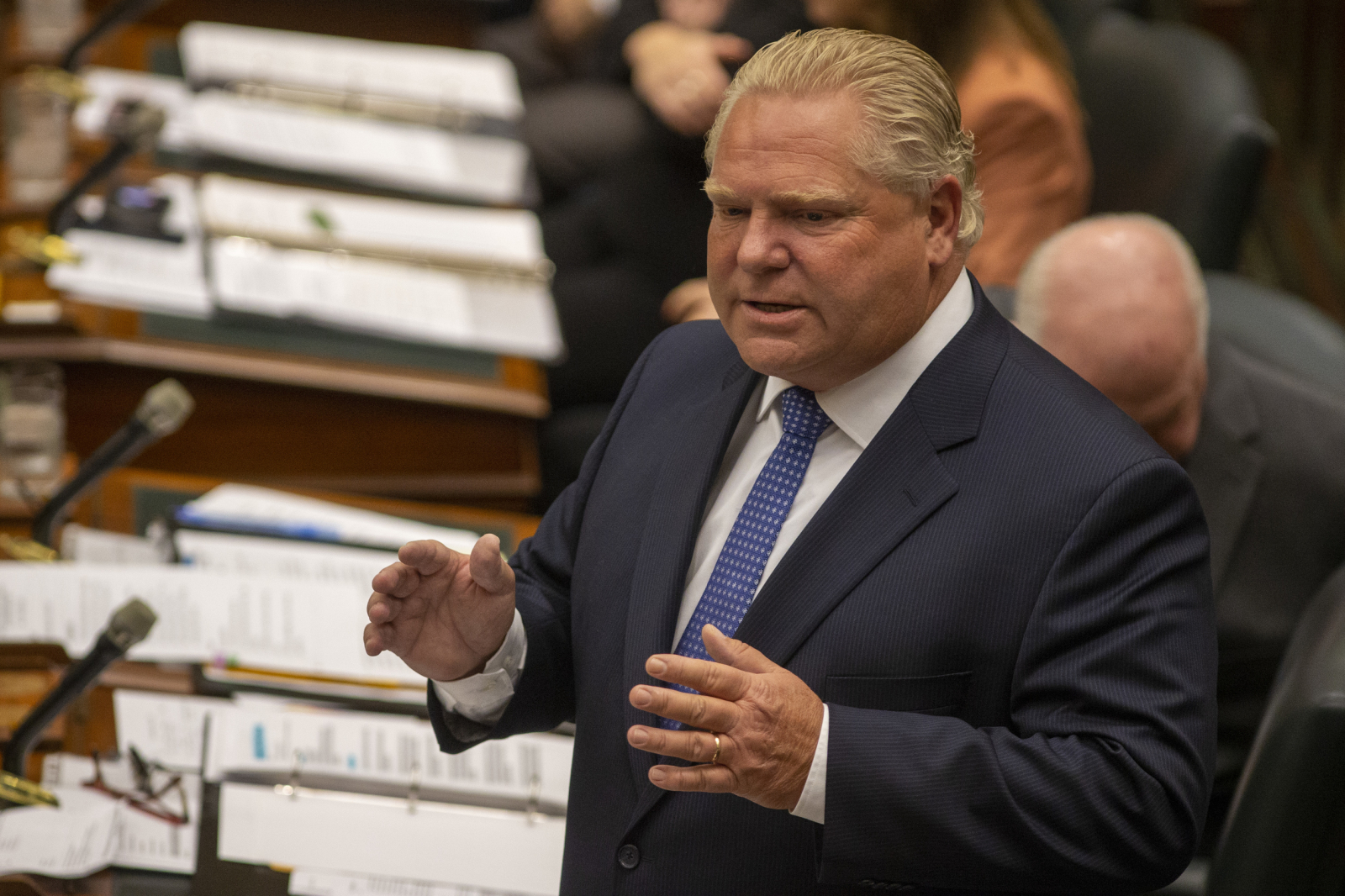 Losing the fight against the federal carbon tax at the Supreme Court of Canada could actually work in Doug Ford’s favour. File photo by Carlos Osorio
Previous story

Now that Doug Ford’s carbon tax stickers have been ruled unconstitutional, one wonders if the Ontario premier is starting to see that a court loss can actually be a victory in disguise.

Much has been written about the new Doug Ford, who is enjoying a surge in popularity as he talks about the need to put politics aside for the sake of “Team Canada,” and heaps praise on Deputy Prime Minister Chrystia Freeland.

The question is whether Ford will apply his new conciliatory approach to another looming threat — climate change. The premier will be tested this month as he confronts two legal battles against the federal carbon tax, a policy he vocally opposed.

This week, the Supreme Court of Canada heard the case Conservative premiers, including Ford, are waging against the carbon tax and rebate system, claiming it is unconstitutional. His government is also considering whether to appeal the ruling by the Ontario Superior Court that struck down his anti-carbon tax stickers on gas pumps.

Losing the Supreme Court of Canada court case against the carbon tax might be the best thing that could happen to Ontario Premier Doug Ford.

Already there are hopeful signs Ford may be changing direction. Ontario’s environment ministry has announced that its new program to regulate industrial emitters has been reluctantly accepted by the federal government. This is a big step forward — Ontario’s industrial greenhouse gas output is second only to Alberta’s — but it still leaves the majority of the province’s emissions in regulatory limbo.

That’s why losing his court cases against the carbon tax might be the best thing that could happen to Ford.

After all, if Ford wins at the Supreme Court, he’ll be forced to implement the rest of his climate plan, and that could pose a real challenge.

As Clean Prosperity and EnviroEconomics showed in a report last year, Ford’s plan is both more expensive and less effective than the federal carbon tax and rebate. Under his plan, Ontario families would lose their carbon rebates — the average family received more than $400 this year alone. Instead, Ford’s plan would cost households $210 per year.

Not to mention that the carbon tax and rebate is supported by a majority of Ontarians. Fighting a court case against the tax is not. New polling by Leger shows that more than half of Ontarians surveyed in the key swing region of the 905 support a carbon tax and rebate, while more than 60 per cent oppose the Ford government using taxpayer dollars to fight the federal policy.

Joining the federal carbon tax system offers Ford a better deal. As long as he puts a price on carbon that meets minimum national standards, he gets to decide how the program should work.

Instead of letting the federal government send carbon rebates to his constituents, the premier would get to keep the carbon tax proceeds in the province. That’s billions of dollars in revenue Ford could use as he sees fit — to cut income taxes, for example, or to send out his own carbon rebate.

Other Conservative premiers have already accepted the wisdom of working with the federal carbon tax instead of against it. Blaine Higgs in New Brunswick joined the system last year, and just won re-election. Premier Brian Pallister in Manitoba has proposed a fuel levy as well, though his system is a $25 a tonne flat tax.

And that’s why a loss at the Supreme Court could actually work in Ford’s favour — it’s a perfect off-ramp. Ford could use the legal loss to pivot, since his hand would be forced anyway. He’d be able to reduce emissions on his own terms, and show voters that he’s serious about climate action. He could move on from fighting the carbon tax, a policy most Canadians accept, and instead focus on developing effective conservative approaches to fighting climate change.

Win or lose, there’s an opportunity for the premier to show Ontarians that Doug Ford 2.0 is here to stay. Because if the pandemic required a Team Canada response, fixing the climate is going to demand even more determined and unified action. Let’s hope Premier Ford, and all Canadian leaders, are up to the challenge.

It might matter when those polls were taken. I doubt parents and old people think as much about his handling of Covid in the past 3-4 months. What I'm hearing is, "What plan for fall? Fall started a month ago!" and "Too little, too late." And then there are the vocal epidemiologists who contradict his claims about "following the advice of top doctors." LTC workers apparently still have no access to PPE ... Etc., etc., etc.

And when it comes to "taxing

And when it comes to "taxing big corporations," we don't have any details, so we don't know what it means: most likely that costs are pass-through costs, with consumers and taxpayers picking up the tab.