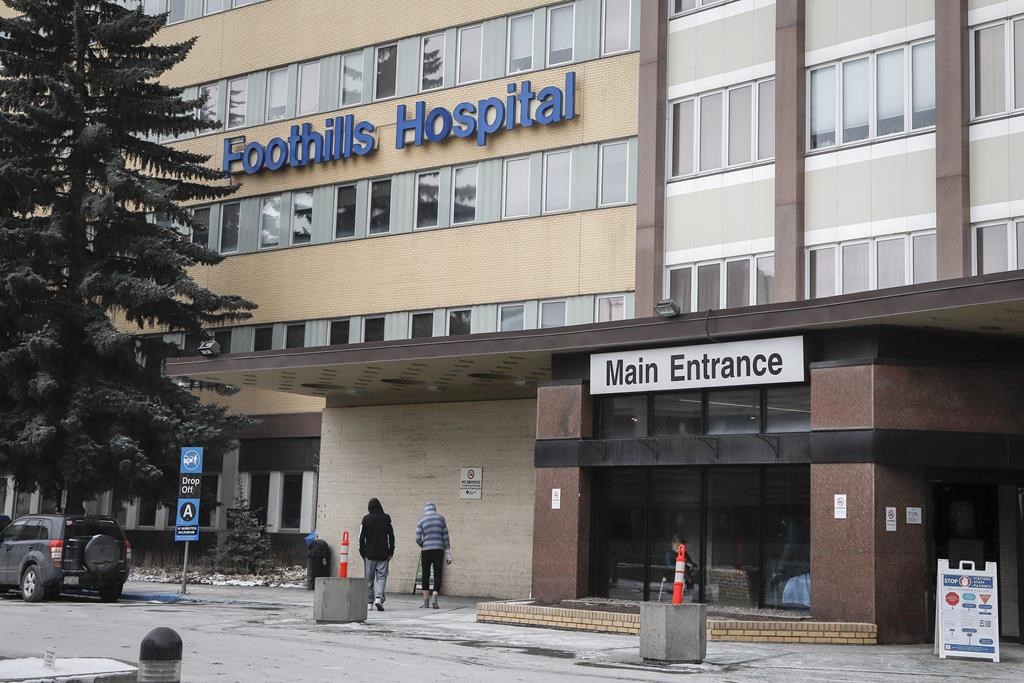 The Foothills Medical Centre in Calgary, Alta., is seen on Wednesday, April 1, 2020, amid a worldwide COVID-19 pandemic. File photo by The Canadian Press/Jeff McIntosh
Previous story

A Calgary hospital was postponing surgeries and restricting visitors Monday as the number of people infected in multiple COVID-19 outbreaks climbed.

"We're working hard to sort it out," he said.

As of Friday, 136 workers were in isolation.

Visitors to the hospital are only allowed in end-of-life situations or if they have been approved as essential.

Jamieson said he hopes it only needs to be a short-term measure.

"Family members and visitors are an important part of looking after a patient and helping them get well, so we don't take this step lightly."

Jamieson added the hospital hasn't noticed a downturn in the number of people coming to the emergency department, which remains open.

However, he knows that was an issue at the beginning of the pandemic, when patients put off getting necessary medical care because they were nervous about going to a hospital.

"I would want people to know that if they need the emergency department, they should come and we're here for you," Jamieson said.

A Calgary hospital was postponing surgeries and restricting visitors Monday, September 28, 2020, as the number of people infected in multiple COVID-19 outbreaks climbed.

Alberta Health Services has postponed 39 surgeries that were scheduled for Monday due to staff restrictions and a reduced number of in-patient beds at Foothills. It said the procedures are being rescheduled as quickly as possible, most within the next week.

Foothills is the main southern Alberta centre for trauma, high-risk obstetrics and strokes, so Jamieson said there are no plans to stop patient intakes at this time.

"While of course the numbers are concerning, the information that I've received indicates to me that there is a very capable outbreak team who's doing a tremendous amount of work to prevent there from being any onward spread."

Hinshaw said she's also concerned about an outbreak at the Millwoods Shepherd's Care Centre in Edmonton, where there have been 19 cases and two deaths.

Among other things, David Harrigan suggests in his letter to Dr. Verna Yiu that special paid pandemic leave, which was cancelled in July, be reinstated.

“Regular employees are running through their sick leave banks and casual nurses don’t have access to sick leave, so they are losing income," Harrigan said in a statement last Thursday.

He also said nurses are feeling "extremely misused and disrespected," and he's concerned that they will feel pressure to report for work even if they are ill.

Alberta reported 1,549 active cases in its Monday update, which is an increase of 52 from Friday. There have also been four more deaths since then, bringing the total to 265.

Sixty-three people are in hospital, including 15 in intensive care.

Hinshaw delivered her update Monday from home, where she is recovering from a sore throat. She tested negative for COVID-19 over the weekend, but said she will stay home until her symptoms resolve.

"I know that staying home is not easy and that many Albertans face difficult financial or other choices," she said.

"Most of us have worked with sore throats or runny noses many, many times. However, during COVID, that's not a risk that I or anyone else should take."

This report by The Canadian Press was first published Sept. 28, 2020