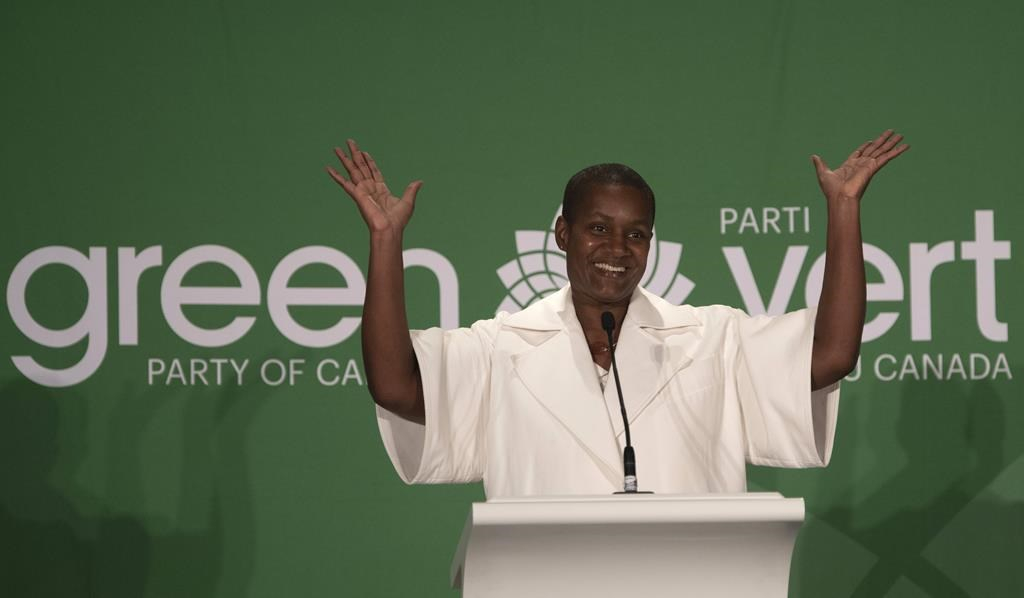 New Green party leader Annamie Paul celebrates after speaking at the leadership announcement in Ottawa, on Oct. 3, 2020. Paul succeeds Elizabeth May, who stepped down last fall after leading the party for 13 years. Photo by The Canadian Press/Adrian Wyld
Previous story
Next story

Paul won a bare majority of votes in the eighth round, defeating Dimitri Lascaris.

Paul, who is Black and Jewish, took the microphone in an Ottawa art gallery after her win was announced and declared herself the descendant of slaves and an ally of those, such as Indigenous people, who are fighting for justice.

"Tonight, we have to recognize that this is an historic moment," Paul said.

"We as Greens, once again, are leading the way. We have done something that has never been done before in Canadian politics, and I congratulate us."

Paul is a non-practising lawyer who has spent much of her career in international institutions, including at the International Criminal Court and in Canada's mission to the European Union.

She said she’s driven in politics partly by her father’s death of an avoidable infection in May, especially as we face a crisis in the earth’s climate and a planet ravaged by COVID-19.

"We must constantly ask ourselves, what is a life worth?" she said.

We’re seeing the price of recklessness in floods, wild fires, and the boom-and-bust cycles in resource-extraction industries, she said, and current politicians don’t know what to do.

"They are intellectually exhausted and they are out of ideas," she said.

The moment calls for boldness and audacity, she said.

"We have a good-news story," she said. "This is the chance of a lifetime for us to move toward a more just, a more resilient society."

Nearly 35,000 people were eligible to vote, almost 10 times the turnout in the last leadership election in 2006, and nearly 24,000 ballots were cast, according to the party.

The Greens used a ranked-ballot voting system, which quickly redistributed members’ second-choice votes if their first-choice candidate came last and was cut.

Paul led on the first few ballots, slipped behind Lascaris for two, and then regained a lead she never gave up on the sixth.

Paul succeeds Elizabeth May, who stepped down last fall after leading the party for 13 years.

May’s electoral success has masked divisions in the party, whose members’ environmentalism ranges from business-minded support for market mechanisms to cut pollution to ecosocialism that rejects capitalism as inherently destructive to the environment.

May will remain a force in the party, as she is still one of its three MPs and as of now, intends to remain as parliamentary leader in the House of Commons.

Before the race concluded, she emphasized that given the latitude the Greens afford their MPs, the new leader wouldn’t be her boss.

May gave something of a farewell speech as leader before the results were announced, though she officially turned over the top job to interim leader Jo-Ann Roberts after the last election.

Roberts thanked May for all she’s done. The two gave each other socially distanced hugs, their arms encircling air as they stood well apart.

May was the Greens' first elected MP in 2011 and since then the party caucus has grown to three. Greens are the Opposition in Prince Edward Island, held the balance of power in British Columbia and elected an MPP in Ontario.

"I am deeply aware of the reality that although people talk about me as if I did all this stuff, it’s not true. I am part of a movement," May said.

She paid tribute to provincial Green leaders, especially B.C.'s Sonia Furstenau, who is in the middle of an election campaign.

Her voice cracking at times, May condemned the world's continued inaction on climate change and the rise of white supremacy as a political ideology.

"The leader of this party must continue to shine a light on hypocrisy," she said.

"We don't have time for despair — it's an enormous threat," she added.

The Greens stand for pharmacare and a universal basic income, she said, as concrete expressions of Canadian values of caring for each other.

The country needs more Greens in office to fight those fights and stand up for science, especially in the era of a global pandemic, she said.

The losing candidates for the federal leadership have all expressed interest in seeking House of Commons seats all the same.

Paul is the first to do that, after being acclaimed the Green candidate for the Toronto Centre byelection being held Oct. 26.

Editor please! Your 3rd graph speaks to the national women leaders on whose legacy Annamie stands, noting three but failing to mention ... past Green leader Elizabeth May!

She seems pretty good, but I

She seems pretty good, but I do wonder about the Greens now being led by anomie. Seems more like a Liberal thing; the Conservatives are led by Resentment, the Liberals by Anomie, the NDP by Earnestness, the Greens by Yearning.

Clever, Rufus - but your list of qualities is inaccurate - misspelling Annamie's name - especially since her campaign was characterized by the very opposite of anomie.

I wish Annamie Paul all the

I wish Annamie Paul all the best. The true test for us will be to give us something and someone to vote for in Vancouver Granville.

Two elections ago we voted strategically (Liberal) instead of with our consciences (though Trudeau's breathless words on fighting climate change helped lubricate the wheel) to get rid of Harper. Oh, how well doing the math worked! This strategy can be important in some cases, and especially so in the absence of having proportionality in our electoral system. Cold, hard math wins over conscience every time. And we were happy to have our new MP, Jody Wilson Raybould, end up as AG.

Second time around, we took stock. We got an instant pipeline and a simple carbon tax that took years to enact. And SNC Lavelin. Not to mention other shameful controversies and some successes. I vowed not to vote for a pipeline party, and Jody changed her supportive position as a Liberal to one of opposition to TMX as an independent. Finally. We waited too long for that. She won, but it was still a strategic vote for us to (i) keep the Conservatives out of power, and (ii) send Trudeau a warming about his hypocrisy and incoherent climate policies. Oh, that worked too, and The Kid was rewarded with a demotion.

I looked at the NDP during last year's campaign but concluded that they would too easily split the vote with an increase in support and the Conservative candidate would sashay up the middle. So much for that route.

But first I looked at the Green candidate who was an unknown real estate agent in the most expensive city in Canada. Hmmm. Strike One. Then a news story appeared quoting Ms. May saying that the Vancouver Granville Green candidate was a "placeholder" and a paper candidate. That was not advertised anywhere in the Green literature. Strike Two. The clincher? May also said the riding staff were in fact working in Jody's office instead of their own. Strike Three. That was such a unique brand of Greenwash that it could've been mistaken as a joke on Vancouver voters. No one laughed.

One can be forgiven for imagining that the Canadian Greens beyond the otherwise most capable and smart Elizabeth May, could be as intelligent and practical as the German Green Party and actually be mature enough to participate in a coalition or minority government one day and do great things. But the incomprehensible tactics used last time in Vancouver puts their readiness in question. The good thing is that Jody won over the TMX loving parties, but it's debatable whether the Greens were responsible in some moderately effective way.

This is a lesson for them for next time. Some of us will be paying attention.