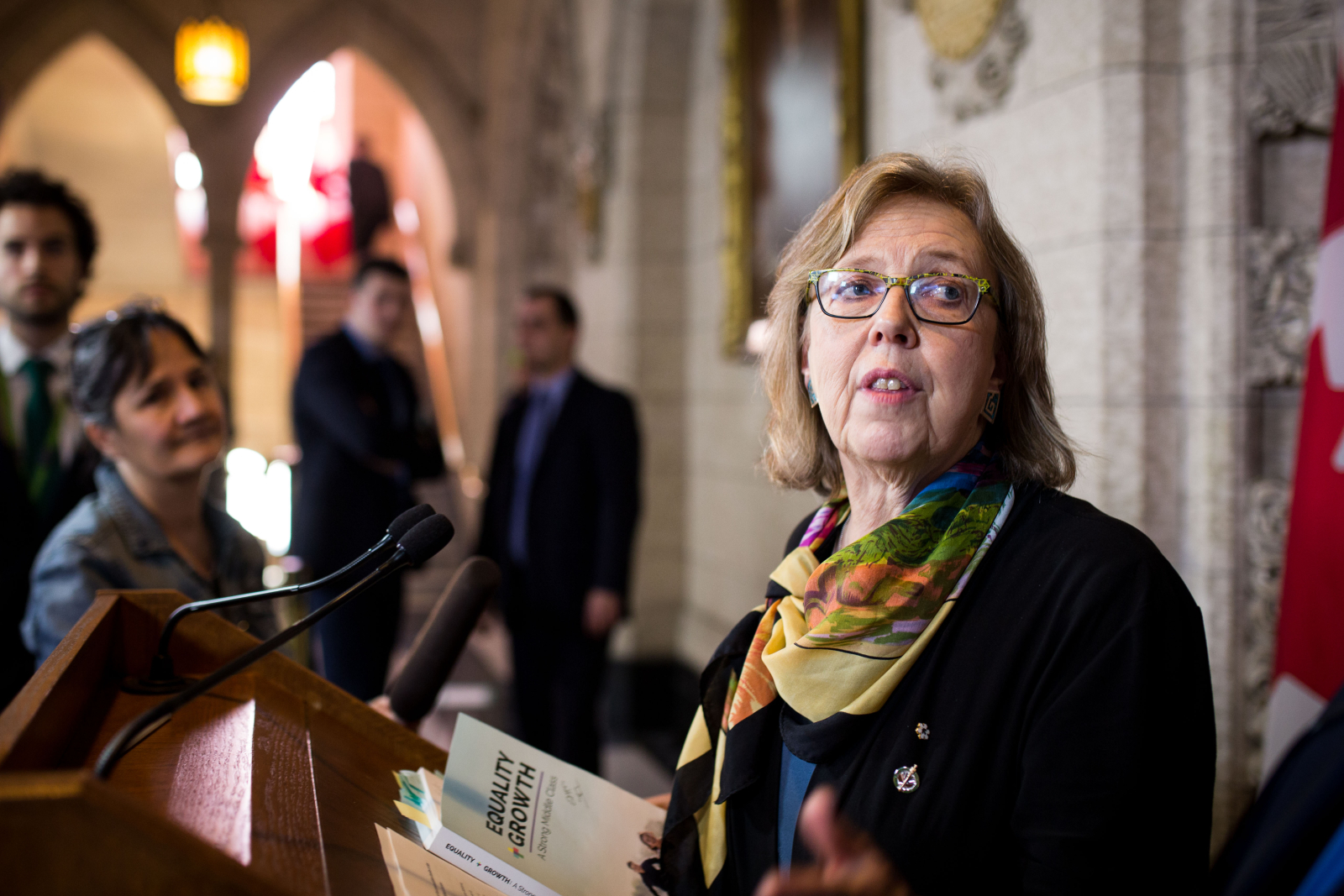 Green Party leader Elizabeth May addresses the press gallery in the foyer of the House of Commons to comment on the Liberal federal government's 2018 budget in Ottawa on Tuesday, February 27th, 2018. Photo by Alex Tetreault
Previous story
Next story

Elizabeth May, the long-time leader of Canada's federal Green Party, announced she is stepping down from her post Monday.

May, who has led the Greens since 2006, said she had assured her daughter Kate that the 2019 election would be her last as leader.

"I promised Kate in about 2016, when I decided I was going to have to stay on for the 2019 election, I absolutely swore to her,” May told reporters in Ottawa. “Unlike politicians who say ‘I want to spend more time with my family’ and go off sadly, I'm very excited to note I'll have time with my husband and time with my daughter and time with my extended family and that I keep my promises, especially to my daughter Kate."

Until a by-election earlier this year May had been the lone Green voice in federal politics since first winning her Saanich-Gulf Islands seat in 2011, and her retreat, while not a surprise given recent comments, leaves an absence at the top of the party.

May will be replaced on an interim basis by Jo-Ann Roberts, the Green Party deputy leader who ran unsuccessfully for a seat in Halifax. A leadership convention is planned for Oct 2-4, 2020.

"This is a position I take on somewhat reluctantly," said Roberts, a former TV and radio reporter. "I joined the Green Party after a long career as a journalist because of Elizabeth May, so it is difficult to think that even on an interim basis that I would try to fill her shoes. So I think I'll just try to keep the shoes in place while we prepare for a leadership race."

The leader of the Green Party of Quebec, Alex Tyrrell, has already said he is considering running to be May's permanent replacement, while several provincial Green parliamentarians might also be willing to throw their hat in the ring.

May retained her seat on Vancouver Island in the Oct. 21 election, and plans to continue to sit in parliament as well as act as its parliamentary caucus leader.

The Greens expanded their seat count to three with the victory of Jenica Atwin in New Brunswick's Fredericton and won 6.5 per cent of the national popular vote.

“Elizabeth has been a personal friend, mentor and hero to me,” said Mike Schreiner, the leader of the Green Party of Ontario and the first Green to sit at Queen’s Park. “Elizabeth’s legacy is indisputable, and for the last decade she has been the heart and soul of the Green movement in Canada.”

Elizabeth May is no longer leader of Canada's Greens, with the long-time leader making room from new blood at the top of the environmental party she has long personified. @5thEstate and @sdbcraig report

“From the bottom of my heart, I thank her for putting the Green movement on the map in Canada and leading the party through historic growth and results,” he said, noting that there are now 18 Greens in legislatures in Ottawa, BC, PEI, New Brunswick and Ontario.

His counterpart in British Columbia echoed that sentiment.

“Thank you @ElizabethMay for your incredible service to Canada,” Andrew Weaver, the head of the B.C. Greens, wrote in a tweet. “You've been an inspiration to many, including me. If it weren't for you, #climatechange wouldn't have been a central election issue in #elxn43 You've demonstrated what integrity looks like in Ottawa.”

Thank you @ElizabethMay for your incredible service to Canada. You've been an inspiration to many, including me. If it weren't for you, #climatechange wouldn't have been a central election issue in #elxn43 You've demonstrated what integrity looks like in Ottawa. #cdnpoli

May had earlier this year offered to give up leadership of the Greens if either Jody Wilson-Raybould or Jane Philpott, who had both been ejected from the Liberal caucus, wanted the role.

“Elizabeth May put the Green party on the map,” said Kathryn Harrison, a professor of political science at the University of British Columbia. “She’s been a highly respected and notoriously hard-working parliamentarian, and has been highly regarded by a large fraction of Canadians as a voice of conscience, especially on climate change and the environment.”

Harrison, who studies environmental and energy public policy, noted that it was a significant achievement for May and the Greens to secure three seats in the latest election given the first-past-the-post system used favours established parties.

She added that, in order to assure voters of their electoral viability, the party would ideally find a replacement “with a reasonably high profile, maybe that’s an MP, maybe it’s a leader of a provincial Green Party, maybe it’s a prominent environmentalist.”

“Greens across Canada owe a huge debt of gratitude for all Elizabeth May has done,” said Harrison. “But I think the woman deserves a break.”

Editor’s note: This article was updated at 3:10 p.m. on Nov. 4, 2019 to include comment from provincial Green leaders and a University of British Columbia academic.