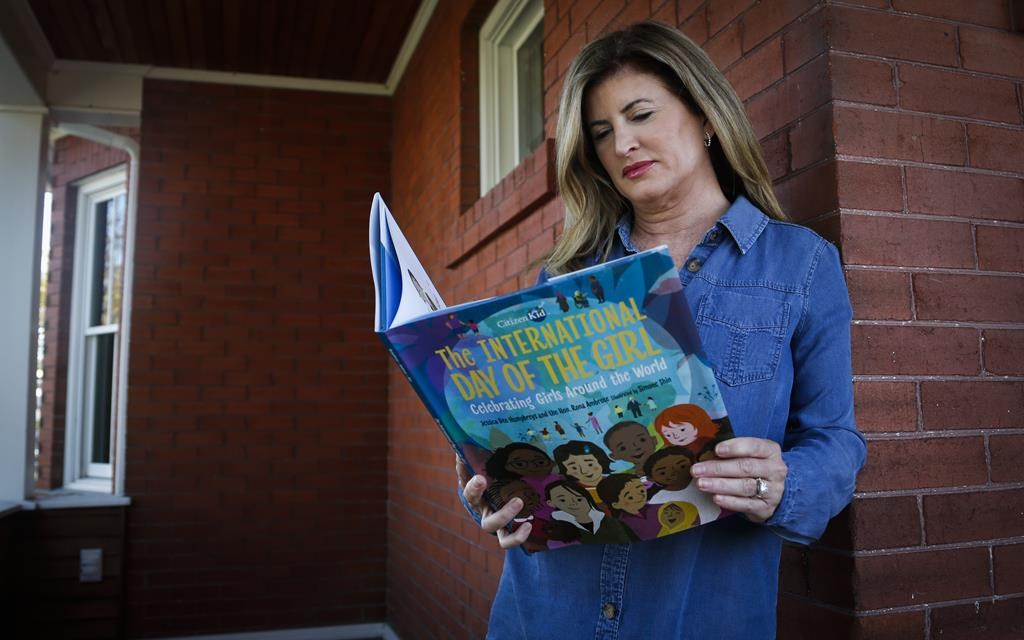 Ambrose, the author of a new book celebrating the International Day of the Girl, says teaching kids early about equality equips them to speak up when they witness or experience discrimination later in life.

"Having these conversations with boys and girls at a really young age is, I think, absolutely essential to really make sure that they absorb what it is to be equal," she said.

"And make that part of their identity of that a very, very young age."

That a dying Quebec Indigenous woman, Joyce Echaquan, was taunted with racist slurs while in hospital last month by professional adults is "unconscionable," said Ambrose, and there must be accountability for those involved.

Two people have been fired, and a coroner's inquest will be held into the incident. On Tuesday, Quebec Premier Francois Legault apologized to her family.

But too often stories like Echaquan's are met with a collective gasp of shock and then nothing really changes, Ambrose said.

While interim Conservative leader in 2017, Ambrose introduced a bill that would mandate training for judges to ensure they weren't being influenced by stereotypes when rendering decisions in sexual assault cases.

"That's why we put forward things like this bill, so that people in the highest positions of our system get training," she said.

"But frankly, that kind of training should exist for a lot of people that are interfacing with the public."

The bill languished in the Senate, despite a cross-partisan show of support in the House of Commons, and died when an election was called last fall.

Former MP Rona Ambrose, author of a new book celebrating the #InternationalDayoftheGirl, says teaching kids early about equality equips them to speak up when they witness or experience discrimination.

It was reintroduced last week by the Liberals, and Ambrose said the fact it has the backing of the country's justice minister gives her confidence it will pass.

While the bill is important, efforts to educate must go beyond legislation, she said, and that's why she's written the book, along with co-author Jessica Dee Humphreys.

In writing the book, she said it was important to not skip over the fact that there are girls in Canada who also struggle with inequality.

Included is a story based on that of Shannen Koostachin, whose advocacy for a school in the First Nation community of Attawapiskat drew international attention.

She died in a car accident at the age of 15 in 2010, and Ambrose said her family is aware that a version of her story appears in the book, using a different name.

The story is one of nine featuring girls from around the world who have overcome obstacles often deliberately placed in their way. Ambrose's share of the proceeds from the book will go to charity.

"For me, it's about teaching kids to be better and great global citizens," she said.

"But then it's also to raise awareness that there's a lot of work to be done around gender equality. And then what it looks like to overcome those challenges."

A key challenge facing governments now, Ambrose said, is how to respond to the gender inequality created by the COVID-19 pandemic.

During past economic recessions, pouring money into infrastructure projects was a tried-and-true way to spur growth, and it does work, Ambrose said.

Except the jobs those projects create are more likely to go to men, and in the context of the pandemic, women's livelihoods are under attack. Jobs in retail or hospitality are dominated by women, and those sectors are in crisis.

Meanwhile, women are also seeing all the formal and informal supports they had for child care become far less reliable, she said.

The question, Ambrose said, is what the policy response can or should be.

"Can you fix this with money? Or is it fixed with a better testing regime to make sure that we keep daycares and schools open?" she said.

"And then corporations, companies are going to have to figure out how to stop this backslide and accommodate a lot of issues that women are dealing with in the workforce."

The Liberals have staked their political credibility on being a "feminist" government that will address the so-called "she-cession" but Ambrose said her party, under the new leadership of Erin O'Toole, must also stake out turf on that front.

"Women are pretty good judges of slogans versus action, and they are pretty tough on who they vote for," she said.

"They know what's good for their families and their communities and their economy. So, you know, it'll be up to our party to make the case."

This report by The Canadian Press was first published Oct. 6, 2020.

Yes, training and education are important. But in my experience, the most important way to extinguish racism (etc.) is by example, example, example. I grew up in a household where neither parent ever said anything racist or demonstrated racism in any way. When we were older and went out into the world, racism shocked us -- and because it was so unnatural to us, we spoke up. It was only when I left home that I learned my parents were full of prejudices, but they had decided -- together as a couple -- to hide them and to raise their children to not discriminate. It was one of the greatest gifts they ever gave us.

Ditto. I guess we're all

Ditto. I guess we're all limited to some extent by what we see, or know ... and in that respect, education *is* key.
One wonders how some of the clowns on the benches of our countries get to sit there in the first place. It seems our selection processes are somewhat wanting. The training should have happened long before arriving on the job. By that point, it should have been absolutely unnecessary, to even qualify to apply for the job.
I'd guess that, push come to shove, there's no one who's not somewhere on a learning curve toward being a better human being.
Ultimately, it seems to me, it's all about being able to see oneself, and those dearest to oneself, in everyone, and vice versa.
I wonder if those parents/girls were made aware, or if they had a part in reviewing and approving how their or their daughters' stories were being portrayed.
I'm so sick of the injustices visited upon some being used as "inspiration" for those who generally face none. It feels almost pornographic.

It died in the House because

It died in the House because her party was Stonewalling UNDRIP.

But if they're reviving this bill, ... then where's UNDRIP? One would think it's just as important in order to protect the RIghts of Indigenous Women and Girls.

Education is nice, improving individual behaviour is nice, but a whole lot of the racism in this country is basically directed against any group perceived as an economic underclass. Getting them all good access to education, services and jobs so they aren't an economic underclass any more would do a lot more than any amount of anti-racist education.