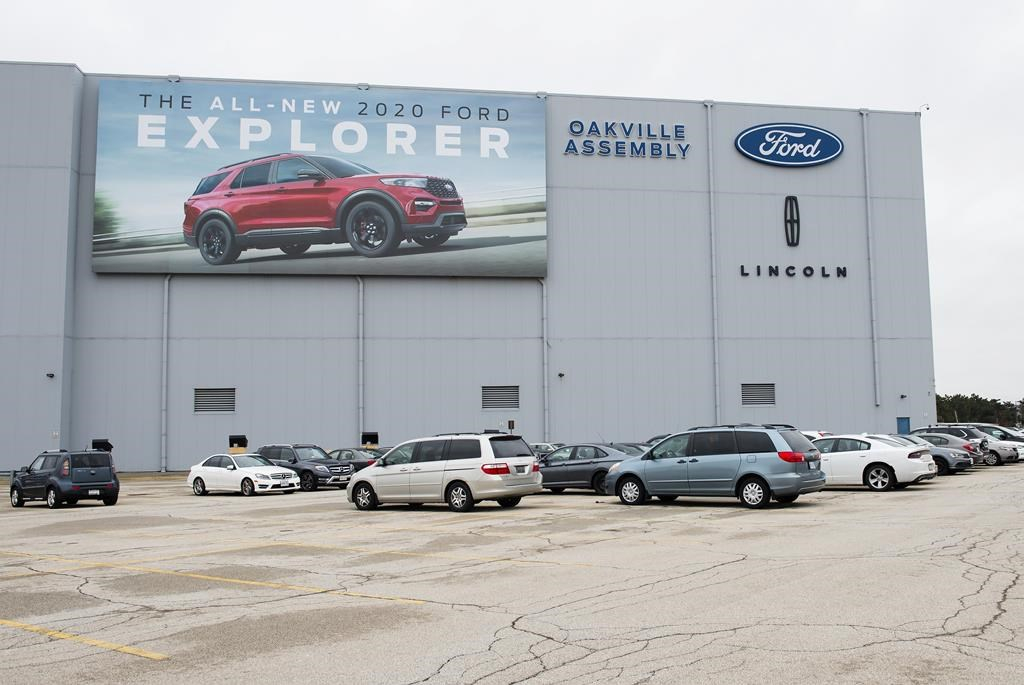 A parking lot with employees' vehicles at the Ford assembly plant in Oakville, Ont., on Thursday, March 19, 2020. THE CANADIAN PRESS/Nathan Denette
Previous story
Next story

The federal and Ontario governments promised Thursday to pour hundreds of millions of dollars into an auto plant for the mass production of electric vehicles and the batteries that power them — a plan they said would help the country's automotive industry stay competitive and recover from the COVID-19 pandemic.

Ottawa and the province said they will each chip in $295 million to support production at Ford Motor Co.'s plant in Oakville, Ont. The funding is part of a three-year agreement worth nearly $2 billion that was announced last month between the automaker and Unifor, the union that represents autoworkers in Canada.

Prime Minister Justin Trudeau and Premier Doug Ford called the joint investment an important step in building the next generation of Canada's auto industry as it increasingly shifts towards green technology.

The agreement will have a significant impact on the industry's supply chain, including auto parts suppliers in the region, Trudeau said from the company's connectivity and innovation centre in the Ottawa suburb of Kanata.

It will also secure 5,000 jobs throughout the automotive industry at a time when the COVID-19 pandemic has prompted workers everywhere to worry about their livelihood, he said.

"For our auto sector, for our environment, this is a win-win."

The premier, who spoke at the Oakville plant with representatives of the motor company and the union, said the deal "marks a new chapter" for Ontario's auto industry.

"We're laying the groundwork for the long-term recovery and prosperity of our province," Ford said.

The Oakville plant employs 3,400 Ford workers, and Unifor president Jerry Dias has said retooling the plant to produce electric vehicles will save 3,000 of those jobs.

The feds and Ontario government say their plan to mass-produce electric vehicles at an Oakville plant would help Canada's automotive industry stay competitive and recover from the COVID-19 pandemic.

From the Liberal government's perspective, the investment will not only help secure good-paying jobs in the struggling auto sector but also give Canada an edge in the global competition to meet what's expected to be explosive demand for electric vehicles in the near future.

The prime minister acknowledged the comparatively high price of zero-emission and battery-powered vehicles can play a role in motorists' purchasing decisions, and urged provincial governments to "do their part" to provide incentives for consumers to switch from traditional gas-powered cars. A $5,000 federal rebate was introduced last spring.

Sales of electric vehicles dropped dramatically in Ontario in the first half of 2019 after the provincial Progressive Conservative government cancelled a rebate for their purchase, according to data released in December by Electric Mobility Canada.

Under the previous Liberal government, Ontario had offered up to $14,000 back for buyers of electric vehicles, but the Ford government eliminated the rebate after taking power in 2018, saying the money was going to people who could already afford expensive cars.

Asked whether Thursday's announcement signalled a shift in the province's stance on green energy initiatives, Ford said his government is a "strong believer in the electrical cars."

Some Ontario legislators called on Ford to do more to promote green energy even as they welcomed Thursday's announcement.

"When the premier came to power, he did everything he could to deter electric vehicles, from cancelling EV rebates to ripping chargers from GO stations," Green party Leader Mike Schreiner said in a statement. "These backwards decisions should be reversed to encourage more job creators to set up shop in Ontario and help drivers make the switch."

The funding announcement is also part of Ottawa's commitment to invest in the transition to a clean, renewable-energy economy, with the goal of reaching net-zero carbon emissions by 2050.

It has already committed more than $300 million to create a network of fast-charging stations for electric vehicles across the country. And it is providing incentives of up to $5,000 off the price of purchasing or leasing electric and hybrid vehicles.

The federal government also hopes the new investment will help boost home-grown mining companies that produce the nickel and other metals used to make the batteries for electric vehicles.

By tapping into its unique natural resources and using them domestically rather than shipping them abroad, Canada can play to its strengths as it helps the auto industry evolve and recover from the pandemic, the federal minister for innovation said.

"And so we have a very compelling value proposition, we feel that Canada can and will be a global leader when it comes to producing batteries and building zero-emission vehicle."

This report by The Canadian Press was first published Oct. 8, 2020.

Green Recovery 101: Governments and the manufacturing sector must work together

I have no problem having

I have no problem having public monies invested in innovation, but is this really an "investment" or is it basically a subsidy to a big corporation? What exactly is the state getting in return?

Why the state must be entrepreneurial
http://evonomics.com/economist-debunks-huge-free-market-governments/

"....while the State should not expect a financial return for its spending on public goods like education and healthcare, the State’s high-risk investments should be thought of differently, and allowed to reap a direct return precisely because the failure rate is so high. Successful ‘winning’ State investments should be able to cash in so as to cover losses when they arise, as well as fund the investments of the future......

***
The repayment of some loans for students depends on income, so why not do this for companies? ......Other ways include giving the state bank or agency that invested a stake in the company..... There is also the possibility of keeping a share of the intellectual property rights......

Recognizing the state as a lead risk-taker, and enabling it to reap a reward, will not only make the innovation system stronger, it will also spread the profits of growth more fairly. This will ensure that education, health, and transportation can benefit from state investments in innovation, instead of just the small number of people who see themselves as wealth creators, while relying increasingly on the courageous, entrepreneurial state."

Sad that the US government

Sad that the US government screams 'bloody murder' when it comes to perceived subsidies for aviation or softwood lumber, but when it comes to corporate welfare for the auto industry, they can't be bothered.. wonder what the health care is like in Alabama?

..probably still an improvement over that in Mexico.. I would guess.