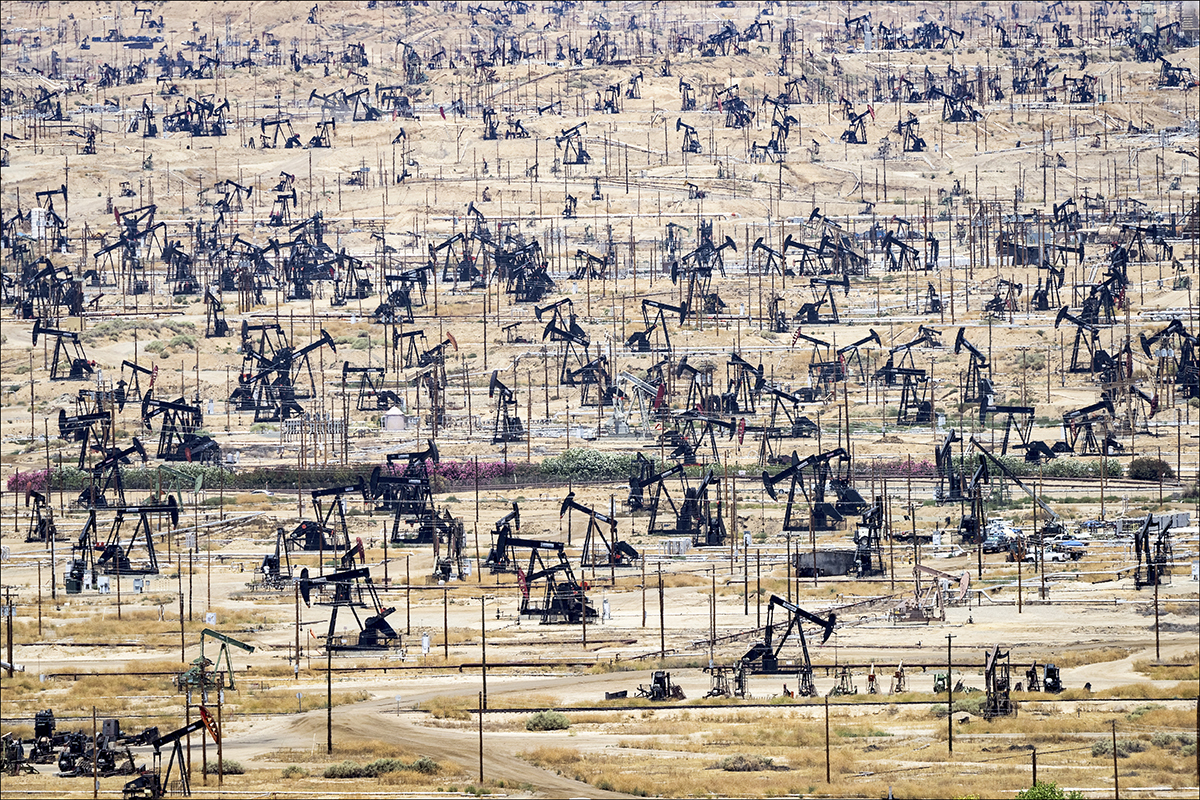 The black, skeletal "nodding donkeys" pumpjacks are crammed into a yellow, dry moonscape of California's Kern River oil field, near Bakersfield. A small glimpse of the mind-boggling 15,000 oil wells.

The photo, titled "The Price of Oil" by Vancouver-based photojournalist Andrew S. Wright, was one of 100 photos out of 50,000 submissions selected by the prestigious Wildlife Photographer of the Year competition this year. Organized by the UK-based Natural History Museum, the international competition has been showcasing the best of wildlife photography for over 50 years, with natural historian David Attenborough presenting the inaugural award in 1965.

"I was pretty thrilled," said Wright. He been entering his photos for the past 15 years, and this year was the first year his work was selected among the "highly commended" photos.

A blunt depiction of the "thirst for oil"

Jaime Rojo, a conservation and environmental photographer and judge at this year's competition, said Wright's "Price of Oil" photo was selected both for its visual composition and the story it tells about natural resource extraction.

"It is often a combination of both (photo composition and subject matter), but the visual aspects almost always come first," Rojo told Canada's National Observer. "In this particular image, the subject matter played an important role. It has a shocking composition, for sure, and the distortion caused by the heat adds to the dystopian atmosphere; but it is the story behind it that caught my attention. Our thirst for oil is bluntly depicted here."

The competition's photo selection, which is covered by major newspapers around the world, gives photographers the rare opportunity to break through social media "bubbles" and draw attention to environmental conservation, he said.

"The competition is one of those vehicles or platforms that transcends so many people's universes. So it's critically important, important place for sparking discussion," he said.

The story behind the photo

Wright took the photo in 2015 as part of his "GroundTruth" project, which tracks the fossil fuel infrastructure needed to support the modern consumer lifestyle, and the impact on the natural world (the project was exhibited in Vancouver in 2018). He was in California to document conservation efforts, and decided to stay awhile longer to capture images of one of California's most iconic oilfields.

"I was traveling to the island of Anacapa, which is off the coast of Los Angeles in the Channel Islands to document the bird recovery that happened from a previous invasive species eradication almost 15, 20 years ago," he said. "Bakersfield had been on my list for quite some time. And so that was a perfect opportunity to delay my return."

He arrived on a sweltering day in June, with temperatures spiking to around 40 degrees Celsius, and drove around the oil field, where he saw signs warning of deadly hydrogen sulfide, or 'sour gas', a corrosive and highly toxic substance. To get an aerial view of the pumpjacks, he went to a public panorama ridge lookout in a park and got a direct telephoto shot of the oil field.

He said the photo he took reminded him of the paintings of L.S. Lowry depicting the 18th century Industrial Revolution, during which workers were pulled into long hours of soullessly repetitive tasks alongside machinery in factories.

Winners and losers in the transition off fossil fuels

Although Wright is a passionate conservationist, he credits the oil and gas industry for dramatically improving human well-being in many parts of the world, and hopes the photo will spark conversations about what it will take to transition off oil in a way that doesn't leave workers and communities out in the cold. He said if the transition isn't done humanely, it will spark civil unrest and destabilize societies.

"There's a consequence of big systemic changes — there are going to be winners and losers. We have to do a better job about making it more winners and a lot less losers," Wright said. He recalled the suffering of coal miners under British Prime Minister Margaret Thatcher, and the failure of politicians to "champion the change and make sure everybody is brought along."

"If you think about it, we use 100 million barrels a day of oil globally," he said. "That level of infrastructure that, you know, allows Amazon to deliver your trinkets in the front door. If you want quality of life to endure, we've got a big job of building a century's worth of infrastructure development in a decade."

Wright hopes his photo, along with others selected for the Wildlife Photographer of the Year contest, will shed light on the urgency of transitioning off fossil fuels and tackling the climate crisis.

"In its many years of history, this competition has done a great job in evolving and adapting to the growing concerns of the public about environmental issues," he said. "That an image like 'The Price of Oil' is awarded and featured in this year’s exhibit speaks about the commitment of this institution to bring important topics such as the climate crisis to the broader audience."

The land is our dinner table