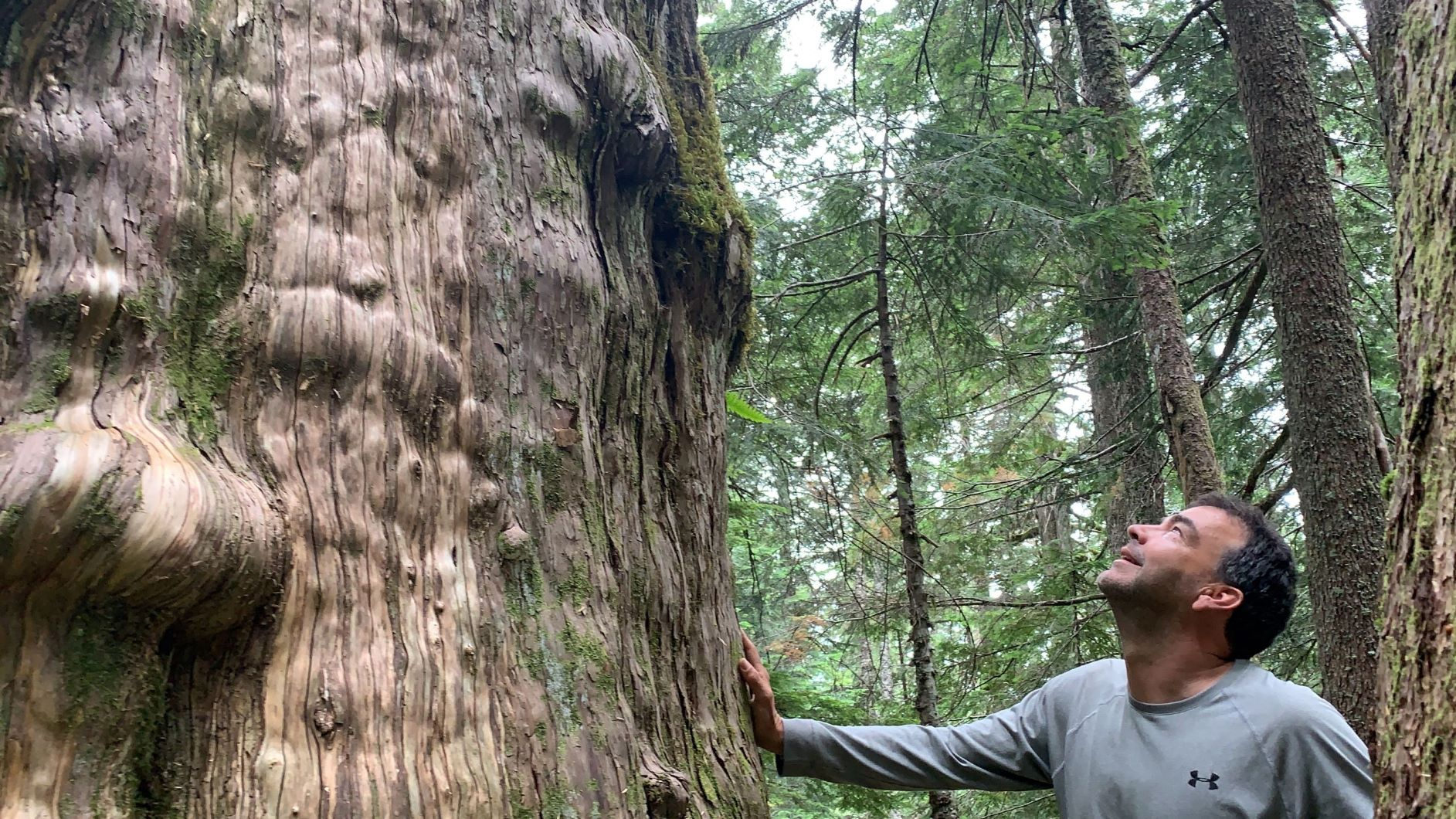 This August, one month before the B.C. government shared an independent panel report calling for changes to old-growth forest management, I visited an awe-inspiring ancient forest in a cutblock proposed by BC Timber Sales in the Sunshine Coast’s Dakota Valley in Squamish Nation territory.

Among the huge trees in this pocket of land stands a majestic yellow cedar about 1,500 years old. Even in this part of the world, there are few trees of this age, and walking among them is like visiting a sacred place. Standing next to this tree, knowing it could get logged within a year, felt dreadful. This tree has a diameter of 2.28 metres and is the 14th largest in B.C., according to the Big Tree Registry.

Yet it will not be protected under the government’s new measures. Why? The new Special Tree regulation only protects trees of this species if they are wider (2.65 metres), and the Dakota Valley is not on the list of areas where logging has been deferred.

This regulation was announced by the provincial government on Sept. 11 as part of its initial steps to protect old-growth forests. The independent panel’s report was released the same day. The report shows how decades of industrial logging practices are leaving a legacy of damaged ecosystems and loss of biodiversity. It was good news to see the B.C. government working with Indigenous governments to defer logging in nine areas. Yet, the story of the ancient yellow cedar in the Dakota Valley illustrates the shortcomings of the provincial response.

The B.C. government did not commit to implementing or funding all the panel recommendations, nor did it commit to a timeline for additional deferrals.

A closer review of the deferral areas shows that while the list includes some spectacular landscapes, the province inflated the numbers by including forests that were already protected or were not at risk of logging.

On the positive side, the B.C. government acknowledged for the first time that provincial old-growth management had “caused a loss of biodiversity” and that officials “need to do better.” Importantly, the panel and the B.C. government have recognized what Indigenous Peoples have been saying all along: Indigenous governments must have a say in decisions about what happens on their land.

For the first time in decades, it seems like the door to protecting what little remains of the last ancient giants across the province has cracked open a little bit. It feels like there is room for hope — a welcome reprieve from the despair we’ve become accustomed to considering how few big old trees are left standing and how fast they are being cut down.

To make the most of this moment, we must keep fighting for what remains standing. In the midst of this provincial election, let’s take a closer look at the old-growth panel recommendations, the provincial response and what more is needed.

Here are some things to know about the old-growth panel report and the provincial response so far:

"For the first time in decades, it seems like the door to protecting what little remains of the last ancient giants across (B.C.) has cracked open a little bit," writes @JensWieting.

The old-growth panel report confirms we are in an ecological emergency.

The panel report confirms the alarming findings of the three independent ecologists who shared their Last Stand for Biodiversity report earlier this year, particularly about the dire state of high-productivity, low-elevation old-growth.

They also summarize the risk thresholds long established in ecosystem-based management research and used in the Great Bear Rainforest showing that logging more than 70 per cent of old-growth forest ecosystems in a landscape results in very high risk for biodiversity, a limit that has long been crossed for almost all of B.C.’s forests with big, old trees.

The panel illustrated this emergency with one of the maps from the Last Stand for Biodiversity report. It shows that forest areas across vast parts of the province already have less than 30 per cent of their old-growth remaining compared to what existed before industrial logging began. (Less than 30 per cent means high ecological risk, more than 70 per cent means low risk.) Forests in this map include those with relatively small trees — minimum site index 10 — and the maps look worse for old forests with big trees.

The panel report calls for a paradigm shift in the way we relate to forests.

After meeting with people from across the province, the independent panel found most agreed we need to shift how we relate to old-growth forests because business as usual puts ecosystems at increasingly high risk for the species that depend on them. The panellists also found the B.C. government has failed for decades to follow through with past recommendations or strategies that could have prevented the severity of the old-growth crisis the province is faced with today.

The report lists numerous examples of where prior commitments were not met, such as a lack of compliance in meeting regional old-growth targets, areas supposedly set aside for old-growth that are, in fact, not old forests and a lack of monitoring.

The old-growth panel recommendations provide a path to solutions within three years.

In its report, the independent panel outlines a blueprint for how the B.C. government can work with Indigenous governments to address risks to old-growth ecosystems and reform forest stewardship within three years. As outlined in the following graphic from the report, the recommended response includes full involvement of Indigenous Peoples, immediate action for ecosystems at high risk, improved management, certainty of implementation and transition support for communities.

This is the first in a three-part series. Next: Why the work must be done in partnership with Indigenous governments and how the initial steps for old-growth are falling short of what’s needed.