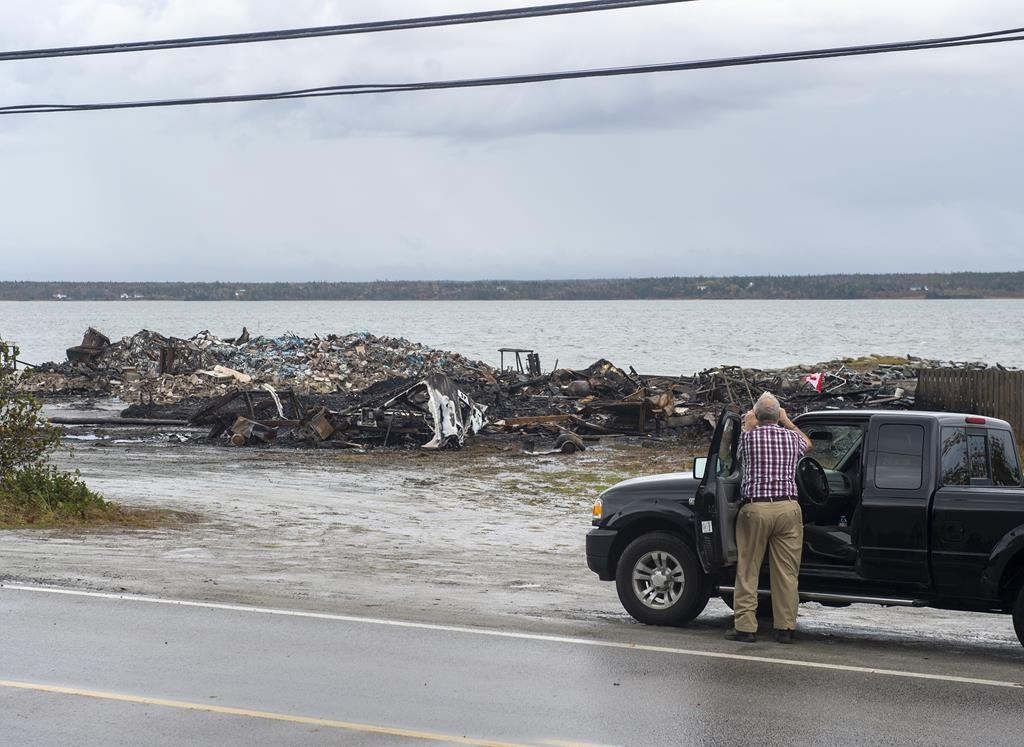 Debris from a burnt out fish plant is scattered along the shore in Middle West Pubnico, N.S. on Saturday, Oct. 17, 2020. File photo by The Canadian Press/Andrew Vaughan
Previous story
Next story

Calls for Ottawa to define a "moderate livelihood" fishery mounted on Sunday, as hundreds gathered in support of Indigenous lobster fishers after a heated dispute over treaty rights boiled over.

Following fierce clashes outside fish plants in southwestern Nova Scotia last week, a lobster pound that stored the catch of Mi’kmaq fishers was burned to the ground early Saturday.

The attacks prompted widespread condemnation, with the NDP's fisheries critic calling for an emergency debate in the House of Commons on Monday.

The escalating violence also prompted a show of solidarity in Halifax on Sunday, where hundreds of people gathered at Grand Parade Square to show support for Mi’kmaq fishers.

In front of a large sign that read “Respect the treaties, protect the sacred,” multiple speakers addressed the crowd and spoke out about the violence directed at Indigenous fishers. Protesters held placards carrying slogans such as “We are all treaty people.”

Eleanor Michael of Sipekne'katik First Nation said she is frightened by the attacks against her community.

"I’m full of fear," she said in an interview after addressing the large crowd in front of Halifax City Hall. "I'm terrified."

Michael added: "I think the moderate livelihood fishermen should be able to do what our treaty said."

McNeil tweeted that the federal Department of Fisheries and Oceans needs to answer the question of what a moderate livelihood looks like before the province can examine its own rules for fish buyers.

He said Nova Scotia’s regulations rely on the federal department's "authority and responsibility to manage the fishery and identify what are legal, licensed fisheries."

McNeil added that the province is working with Ottawa to find a facilitator to "bring the sides together."

"The way to resolve the issue is through respectful dialogue," he said. "I‘m deeply concerned about the acts of intimidation and violence."

A man considered a person of interest in the lobster pound fire remains in hospital with life-threatening injuries.

Prime Minister Justin Trudeau said he is "appalled by the acts of violence, intimidation, and destruction taking place in Nova Scotia."

"The perpetrators will be held accountable," he said Saturday on Twitter, noting that Ottawa has approved the request to provide more policing support. "We’re focused on keeping people safe."

In response to the recent violence, Public Safety Minister Bill Blair approved a request by Nova Scotia's Attorney General to step up the RCMP presence in the region.

Chief Mike Sack of the Sipekne'katik First Nation said he is grateful for the added policing and law enforcement resources.

But he said some of the "damage, destruction, racist behaviour, harassment and intimidation" could have been avoided had repeated requests for a greater police presence been addressed more promptly.

Still, Sack said he appreciates the efforts of local RCMP and is pleased they'll get the back up needed during an "extremely overwhelming time for all of us."

The Supreme Court of Canada issued a landmark decision in 1999 that said the Mi'qmaq and Maliseet people of Atlantic Canada and the Gaspe region of Quebec have a right to earn a "moderate livelihood" from fishing.

The ruling upheld the Peace and Friendship Treaty of 1752, which promised Indigenous Peoples the right to hunt and fish their lands and establish trade.

Many non-Indigenous critics, however, cite a clarification issued by the court, stating the treaty rights would be subject to federal regulations.

Commercial fishermen have also expressed concern with the conservation of fish and lobster stocks.

Yet others have argued that commercial fishing seasons are based on the economy and trade, and the scale of the small Indigenous fishery doesn't impact conservation.

The dispute has become so heated that the head of a Maritime Fishermen's Union local resigned, citing harassment and intimidation against him and his family.

This report by The Canadian Press was first published Oct. 18, 2020.

I recently read the lobster

I recently read the lobster industry puts 700,000 traps out with 1000's of licenses. The number of aboriginal traps or pots being placed is apparently less than 1%. Taking the law into their hands will not do lobster fishers any good. Maybe a boycott like the one for seals is order? This systemic racism is similar to the alt right white supremists of alberta attacking a peaceful demonstration in Red Deer. Burning a lobster plant has turned me against lobster fishers.