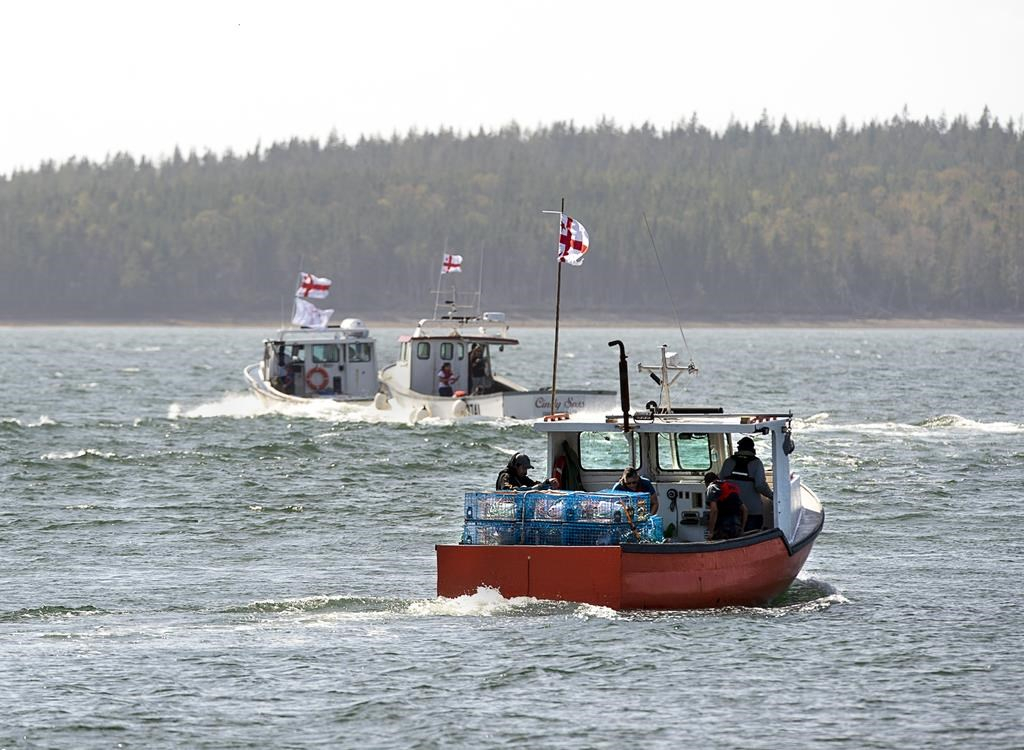 Members of the Potlotek First Nation head out into St. Peters Bay from the wharf in St. Peter's, N.S., as they participate in a self-regulated commercial lobster fishery on Thursday, Oct. 1, 2020. THE CANADIAN PRESS /Andrew Vaughan
Previous story
Next story

HALIFAX — Tensions remain high in the dispute over the Indigenous lobster fishery in Nova Scotia. Here are five things to know about the situation:

The dispute has a long history.

In September 1999, the Supreme Court of Canada affirmed the treaty rights of the Mi'kmaq, Maliseet and Passamaquoddy bands in Eastern Canada to hunt, fish and gather to earn a "moderate livelihood."

The court decided that a Mi'kmaq fisherman from Cape Breton, Donald Marshall Jr., had the right to fish for eels and sell them when and where he wanted — without a licence.

That ruling was based on the interpretation of the Peace and Friendship Treaties approved by the British Crown in 1760 and 1761, which describe long-standing promises, obligations and benefits for the Crown.

The Supreme Court also said Marshall's treaty rights were protected by the Constitution. However, the court said those rights are limited to securing "necessaries" and do not extend to the "open-ended accumulation of wealth."

The Supreme Court of Canada clarified its ruling and muddied the waters.

Two months after the Marshall decision, the Supreme Court provided a clarification that remains at the heart of the current dispute in Nova Scotia.

The court stated that the constitutionally protected treaty rights cited in the first decision were not unlimited, and the Indigenous fisheries could be regulated.

The court, however, also said those regulations had to be justified for conservation or other important public objectives.

Tensions remain high in the dispute over the Indigenous lobster fishery in Nova Scotia. Here are five things to know about the situation. #Mikmaq #NovaScotia #cdnpoli

When the Sipekne’katik First Nation launched its self-regulated lobster fishery on St. Marys Bay on Sept. 17, the federally regulated fishing season in that area had been closed since May 31, and it doesn't reopen until Nov. 30.

The federal government has reached fishing agreements with other First Nations in the region.

After the Marshall decision spelled out the extent of treaty rights in 1999, some First Nations started fishing for lobster right away, prompting a backlash from non-Indigenous protesters.

The Mi'kmaq communities at Burnt Church in New Brunswick and Indian Brook in Nova Scotia — now known as Sipekne’katik — defied federal authorities and set traps outside the regulated season.

That led to the seizure of traps, arrests, charges, collisions on the water, shots fired at night, boat sinkings, injuries and threats of retribution.

At the time, the federal Department of Fisheries and Oceans assumed an aggressive posture on the water, where DFO boats were spotted ramming Mi'kmaq boats from Burnt Church.

And in 2019, Fisheries and Oceans Canada signed two 10-year Rights Reconciliation Agreements with the Elsipogtog (Big Cove) and Esgenoopetitj (Burnt Church) First Nations in New Brunswick, and the Maliseet of Viger First Nation in Quebec.

Most Mi'kmaq in Nova Scotia say they aren't interested in selling out their treaty rights.

Bruce Wildsmith, legal counsel for the Mi'kmaq Rights Initiative, has said the 2019 agreements don't meet First Nations' requirements for a licensed moderate livelihood fishery, which he sees as separate and distinct from a regular commercial fishery.

These agreements require Indigenous fishers to adhere to federal regulations, including restrictions on when fishing can take place.

Wildsmith, who represented Marshall before the Supreme Court, says the Mi'kmaq want a moderate livelihood fishery based on separate consultations with the federal government. The fishery would have its own set of regulations based on nation-to-nation agreements that have yet to be drafted, despite years of talks.

Conservation of the lobster stocks is central to the debate in Nova Scotia.

Some commercial fishermen have argued that lobster fishing should not be permitted at this time of year because lobsters moult — shedding their undersized shells — in the midsummer months, which is also when female lobsters can mate.

Couple of things. First, while it's certainly reasonable and a good thing to worry about conservation, the numbers of this fishery are currently very small and the lobster stock is robust, so for practical purposes right now they aren't threatening anything. So I'd say there's room to negotiate before gathering in angry mobs torching people's stuff.

Second, the mob's response comes from a basically racist posture. It says, we get to decide what you guys do, we get to decide what's a threat and what isn't, you don't have equal standing to make decisions about conservation or about anything else. The outrage is not about the 350 lobster traps, it's about the threat of local first nations presuming to make decisions for themselves about whether and how they are fishing. If it was some white municipality that had some special rights affirmed by the supreme court and the mayor had decided to take action based on that, they wouldn't be gathering in mobs, they'd be asking for negotiations.

Absolutely!! So much for

Absolutely!! So much for erasing racism in this country, and promoting the MMIWG and UNDRIP recommendations,
Also, as usual, these issues are all full of bandaid bits added on here and there over time, making the current situation IMPOSSIBLE for ANYONE to navigate!
Just like every other confrontation involving first nations, the feds are negligent, and MUST clear the path to true reconciliation!