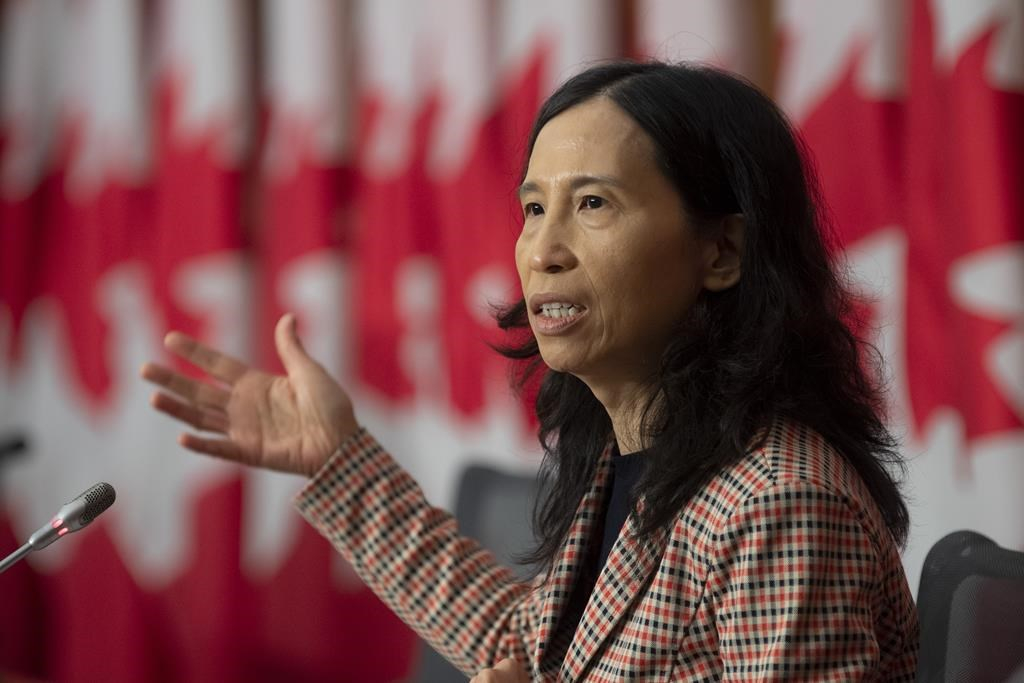 Canada's chief public health doctor is worried about the amount of false information being floated about the COVID-19 pandemic.

Dr. Theresa Tam says when false information is spread — either intentionally or not — it does not help public health officials ensure the public has the information they need to make the right choices.

"As I reflect on the unprecedented pandemic that we have, there's also I think the pandemic that's occurred in the age of social media, and many different ways in which information is spread faster than the virus itself," Tam said Tuesday at one of her regular news conferences on Parliament Hill.

Both Tam and Prime Minister Justin Trudeau urged Canadians to be responsible about the information they share by verifying it first with multiple and official sources.

"When you look at a piece of information, ask a number of questions, including exactly where this has come from," said Tam. "Definitely ask yourself this question before you forward the information to someone else."

Staff in the Prime Minister's Office confirmed they respond frequently to queries about fake news. Some of it arises in other countries and is picked up here, sometimes it's Canada-specific.

Trudeau said some of it comes from "foreign actors trying to disrupt successful democracies, others are people with extremist agendas within our countries trying to weaken people's confidence in our institutions and our democracy."

In many cases it has a real impact. A survey by health authorities in Quebec in August found about one-quarter of people in that province believed COVID-19 was created in a laboratory on purpose and a third felt the government was hiding things about the pandemic.

Other surveys have found people who believed conspiracy theories about the virus's origins were less likely to follow public health advice about wearing masks, physical distancing and limiting contacts.

Trudeau said he was asked by a student in a recent forum about "COVID internment camps."

"When you look at a piece of information, ask a number of questions, including exactly where this has come from," Dr. Theresa Tam said during a #COVID19 press conference Tuesday.

The internment camps claim arose recently after Health Canada posted a request for information online seeking a business that might be able to help manage the government's quarantine sites.

Health Canada has managed 11 quarantine sites in nine cities for travellers arriving from abroad who don't have suitable places to quarantine, such as someone who lives with a senior citizen and whose home doesn't have space to isolate from the high-risk individual for two weeks.

The department is now potentially looking for a third-party operator to manage quarantine sites.

"These emails and social media posts about 'isolation camps' are an example of false information being used to play on fears over a public health issue," Davidson said. "Disinformation like this is intended to deceive Canadians and cause fear and confusion."

Another claim floating around currently is that the federal government is making up the pandemic in a bid to generate public support for a universal guaranteed income and to relieve all household and consumer debt in Canada.

A spokesman for Trudeau said that claim has no basis in reality.

I agree with the need for

I agree with the need for quarantine sites, but how do they differ from “internment camps?” Semantics?

I think the connotation of

I think the connotation of "internment camp" is that you don't let people go. Presumably the idea is that for some reason, the Canadian government wants to pay to keep random Canadians who get Covid locked up forever. Or maybe the notion is that claiming people have the virus is only a pretext, and they in fact grab political opponents, claim they have Covid, and they're never seen again. Something like that. Conspiracy theories have always been pretty looney, but in the age of QAnon they're just gaga.

When respected doctors and

When respected doctors and scientists who question the extreme measures used in this so-called pandemic find themselves labeled as 'fake news', we have a problem, Houston.

Define "respected."
Part of the problem, as I see it, is that information delivered by Public Health is largely framed in terms of "health policy speak" not in language and with explanations that are immediately understandable by people with even median level education and comprehension of "formal speak." This is a problem not only in health/public health, it's endemic in policy fora: and has the net effect of people all talking past one another, each believing his/her understanding of a particular jargon term is the correct one.
Another problem is that from the outset, public health officials at all levels claimed the level of knowledge was greater than it was: so they've flip-flopped on transmission by airplane travel (border closures), mask wearing, methods of transmission (fomite: remember fomites?), viability of viruses in air (still a problem), distance viral loads travel when people speak, etc. (still a problem when it comes to distancing recommendations), size of respiration particulates that can carry sufficient viral load to transmit disease, infectiveness during incubation period between exposure and symptoms (for very long, though well documented in science from , e.g., China and Germany, "fever" was said to be the sine qua non of infectability -- and meanwhile health-care workers passed the illness amongst themselves and to patients, because *they* didn't have fever -- but for months before "we here" would acknowledge it, medical people providing "expertise" on radio and TV, and indeed, in some public health branches, claimed there was no such thing as pre-symptomatic, post-symptomatic or asymptomatic transmission.
They made other claims there was absolutely no basis for: closing borders doesn't work, little kids don't get sick and don't spread the illness, young people don't suffer severe or long-term effects, the sickness can't be spread in a few minutes of face-to-face time ... absolutely without any basis in science.
But they used science as a reason for not taking cautionary measures. Go figure.
What worked particularly well in BC in the first wave was that they had a Chief Medical Officer of Public Health who knew her job, undertood the implications of "SARS-related" (the first way the illness was described, for heaven's sake!!!) and acted accordingly, communicating clearly in a way understandable to all. She was personable and clear spoken, and exhibited the kind of leadership that inspires co-operative behaviour. That, and there are an awful lot of small communities in BC, where village censure is enough to keep non-compliance in check.
Let's not be too handy blaming things on conspiracy theories and Russia: that kind of talk gets no one nowhere: let's just start, for heaven's sake, laying things out plainly, using our noggins, and making policy that makes sense in light of the science.
People are justifiably underwhelmed by "the System's" apparent valuing of their personal safety, health, and situation.
Meanwhile, let's also call a pitchfork a pitchfork: it's not because "racialized" individuals are that, that they're getting sick in droves. It's because they live in the cheapest accommodation possible, in apartments that are "under-sanitized," where there is no compliance with directives to provide hand sanitizers in lobbies, and to post notices requiring mask wearing in "public areas": hallways, elevators, laundry rooms, lobbies. And there is no penalty for not doing so, so why on earth does anyone expect that landlords who can't bother to fix toilets that don't work, taps that don't deliver water, heating with broken thermostats, would bother ???
On top of that, they work on the front lines of essential services, in multiple locations, often multiple locations in a single day, and ride transit piled in like sardines ... while yes, most people wear masks, but I've seen by now so many shots on TV news of people wearing masks *under* their noses, and even *under* their lips, for criminey's sake!!!
And it took several people sending e-mails to remind government officials and newscasters that social distancing applied to them, too, and if they weren't doing it, what kind of example were they setting, anyway ... ???
The truth of the matter is, there have been exactly zero "extreme measures." And it's not a so-called pandemic, it's a bona fide pandemic, in which exactly zero countries have had no cases, and in which the world-wide death toll long ago surpassed a million. What's your definition, sir, of a "real pandemic"?
They flip-flopped over the necessity of quarantine, over the usefulness of masking,

Respected? How about two of

Respected? How about two of the many examples:
https://www.sott.net/article/443240-World-Doctors-Alliance-Open-Letter-t...
and
https://gbdeclaration.org/