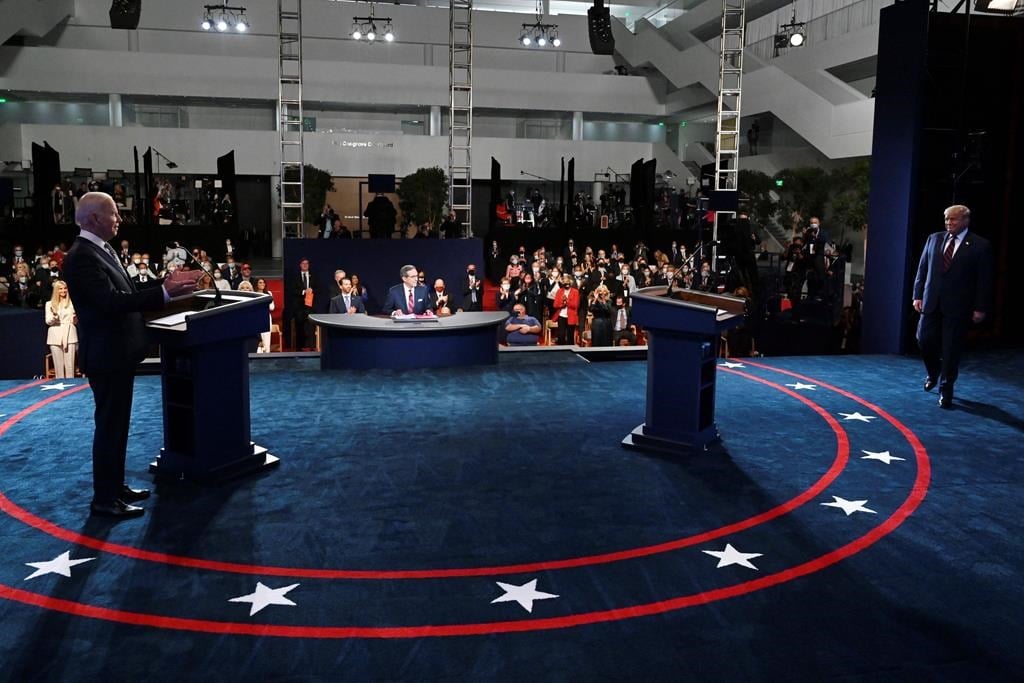 Vice President Joe Biden stated near the end of the presidential debate on Thursday that he would “transition” America away from dependence on oil, if elected president.

“Would you close down the oil industry?” Trump asked.

“I would transition from the oil industry, yes,” Biden responded.

A Presidential candidate just said he would wind down the oil industry, eliminate fossil fuel subsidies and focus on building renewables. That is epic. #climatemergency #hope #Debate2020

Trump showed a measure of restraint during the first part of Thursday's presidential debate, shrugging off Joe Biden's attacks over his handling of the pandemic and accusing the Democratic nominee of planning to shut down the country.

The first 20 minutes of the debate in Nashville, Tenn., was dominated by COVID-19 and featured measured exchanges and cool tempers, a far cry from the hectoring and haranguing that was a dominant feature of last month's initial clash.

The relative calm didn't last the whole 90 minutes, however.

Donald Trump showed a measure of restraint during the first part of Thursday's presidential debate, shrugging off Joe Biden's attacks over his handling of the pandemic and accusing the Democratic nominee of planning to shut down the country.

There were flashes of anger and frustration on both sides throughout the night, although this time the discussion didn't immediately collapse into insults and name-calling thanks to brief two-minute periods with muted microphones.

More than 220,000 Americans are dead of the novel coronavirus, Biden said at the outset — deaths that happened on the president's watch. Nearly as many more could die before the end of the year, he added.

"If you hear nothing else I say tonight, hear this," Biden said.

Trump, as he often does, insisted that a vaccine is imminent — "a matter of weeks," he claimed, though he added that timeline is not guaranteed — and that the severity of the pandemic is fading, even though the opposite is true.

"We're rounding the corner," he insisted. "It's going away."

After last month's interruptive, insult-riddled clash, Biden and Trump were each given a two-minute window every 15 minutes when their rival's microphone was turned off.

The Trump campaign described the rule change as an attempt to give the Democratic nominee an unfair advantage, but the president was clearly showing more restraint than he did during the initial clash in Ohio.

That may be because he's been sliding in the polls, particularly since the last debate. Even though more than 47 million Americans have already cast ballots, the rest of the country may only now be paying close attention to the race.

Unlike last time, Biden was able to better enunciate positions on issues like health care, immigration, climate change and raising the minimum wage — and to rebut Trump's efforts to brand him and his family as having enriched themselves during his tenure as vice-president.

But Trump managed to land a few blows of his own, accusing Biden of planning to ban fracking, a major issue in the key battleground state of Pennsylvania, and of stumping for the costly Green New Deal, a climate-change plan championed by progressive Democrats in Congress.

Biden insisted neither claim is true. But he saved his most strenuous denial for Trump's most dubious charge.

In a report last week as widely disputed as it was explosive, the New York Post disclosed emails supposedly retrieved from a laptop belonging to the former vice-president's son that refer to a meeting between his father and an adviser to Ukrainian energy giant Burisma.

Subsequent Post reports based on the material, which was provided to the newspaper by longtime Trump operative Rudy Giuliani, allege a business agreement involving the Bidens and a Chinese company.

Indeed, one of Trump's guests at the debate Thursday was Tony Bobulinski, a former associate of Hunter Biden who told the Post the emails are legitimate and make reference to the elder Biden as "the big guy."

"It should have never happened. And I think you owe an explanation to the American people."

The former vice-president, who has dismissed the whole saga as a "last-ditch effort" to smear him and his family, laughed off Trump's allegations, and pointed out the president's steadfast refusal to release his tax returns.

"I did my job (as vice-president) impeccably," Biden insisted.

"The guy who got in trouble in Ukraine was this guy," he said, pointing at Trump, "trying to bribe the Ukrainian government to say something negative about me, which they would not do, and did not do because it never, ever, ever happened."

And he turned the charge of wrongdoing in China around on Trump, pointing out recent reports that the president has a bank account there, which Trump did not deny.

"My son has not made money in terms of this thing about ... China. The only guy who made money from China is this guy."

During last month's clash in Ohio, Trump interrupted, antagonized and irritated his Democratic rival from the outset, vexing moderator Chris Wallace and eliciting an exasperated plea for order from Biden himself: "Will you shut up, man?"

The version of Trump on display that night showed up a few times Thursday. This time, Biden mostly laughed him off.