A ‘perfect storm’ of pre-election uncertainty along the U.S.-Canada border 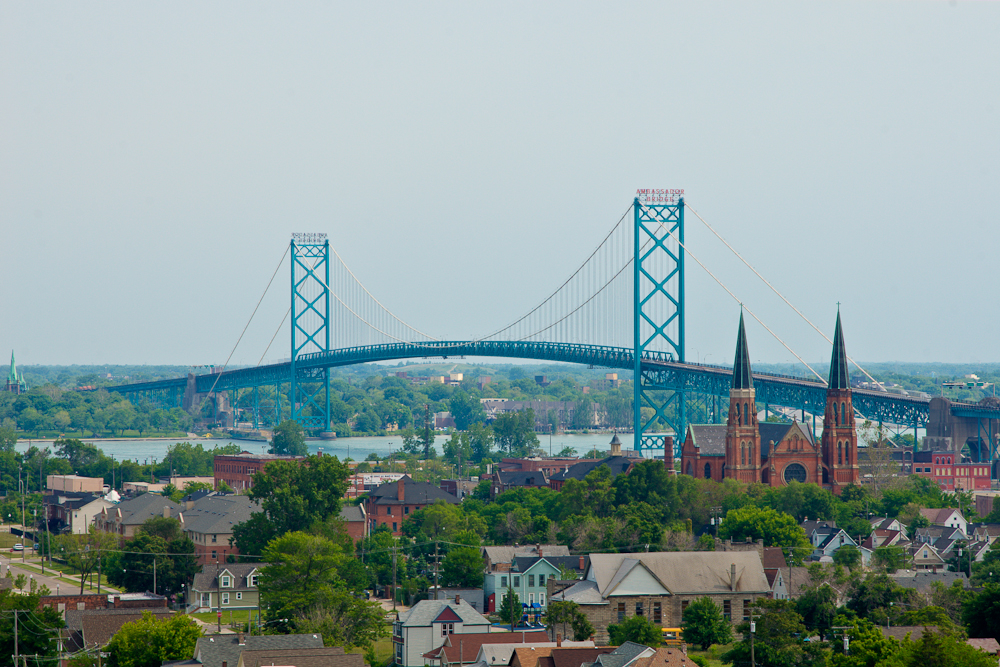 The Ambassador Bridge, which connects Windsor, Ont., and Detroit, Mich. Non-essential travel between the U.S. and Canada has been shuttered since March. Photo by John Hardwick/Twitter
Previous story
Next story

This is the fourth of a series of stories Emma McIntosh is writing as part of National Observer's special coverage of the U.S. election. Read the first, second, third, fifth and sixth stories here.

In normal times, residents of Windsor, Ont., and Detroit, Mich., cross the U.S.-Canada border as easily as many of us might wade through a cool stream on a summer day.

Windsor residents would drive across the Detroit River to catch a concert or a sports game. Folks from Detroit would pass over to visit seasonal cottages on the Canadian side or to shop. Cross-border friends, families and business associates could zip back and forth on the Ambassador Bridge or the Detroit-Windsor tunnel largely as they pleased.

All of that changed in the chaotic early days of the COVID-19 pandemic when Prime Minister Justin Trudeau and President Donald Trump shut the border to non-essential traffic. Since then, Canadian officials have said Canada’s busiest border crossing will stay shuttered as long as the public health risks involved in reopening outweigh the economic damage done by keeping the border shut.

“We keep extending the border closures because the United States is not in a place where we would feel comfortable reopening those borders,” Trudeau said earlier this month.

Throw in a contentious presidential election where not just trade policy but the science underpinning the response to the pandemic is being debated, and all of a sudden, a lot seems to be in limbo.

“Pretty much all we have right now in every aspect of our lives is uncertainty,” said Sandy Baruah, the president and CEO of the Detroit Regional Chamber.

This matters for Canada as a whole because three-quarters of our exports go to the U.S. But it matters even more for border regions like Windsor and Detroit, where people’s lives are even more closely intertwined.

“For us, it is very important that there is business continuity and things are stable.”

The tight relationship between cross-border cities like Windsor and Detroit was upended when non-essential travel was halted in March. Throw in a contentious presidential election, and suddenly, a lot seems to be in limbo. #Election2020 #cdnpoli

We are extending non-essential travel restrictions with the United States until November 21st, 2020. Our decisions will continue to be based on the best public health advice available to keep Canadians safe. More info:https://t.co/EZ3pi3asJr

‘A very long and painful closure’

The latest travel restrictions between the U.S. and Canada will remain in place at least until Nov. 21, weeks after the Nov. 3. election, Public Safety Minister Bill Blair confirmed this week.

Though Trump insisted in September that “Canada would like (the border) open,” polls have consistently shown the opposite. Nine in 10 Canadians favour border restrictions, according to a survey released by Research Co. last month.

Looking at public health data, it’s easy to see why. Michigan has reported a rate of about 1,640 COVID-19 cases per 100,000 people since the pandemic began. Even as cases surge again in Canada, Ontario’s cumulative rate of COVID-19 is much lower, at about 443 per 100,000 people.

At the same time, the closure has brought significant challenges on both sides.

On top of COVID-19 shutdowns, small businesses ⁠— hotels, motels, restaurants, retail stores and more ⁠— have been devastated by the drop in cross-border tourism, Naidu said. Nearly 25 per cent of income for some main street retail stores typically comes from American visitors, he added.

“It’s been a very long and painful closure,” Naidu said. “It has definitely affected us… It’s a perfect storm.”

American businesses that rely on Canadian tourists ⁠— like sports venues or casinos ⁠— have seen similar problems, Baruah said, although it’s hard to tell how much is due to the border closure and how much is caused by public health measures related to COVID-19. And many groups of family and friends that live on different sides of the border are unable to see each other.

“We view Windsor and Ontario very much as part of our region, and it feels wrong for us to be cut off there,” Baruah said. “Certainly, almost all of us know people who are socially separated.”

While essential traffic for goods and services has continued, “non-essential” face-to-face conversations have ground to a halt, said Bill Anderson, director of the Cross-Border Institute at the University of Windsor. That means it may be more difficult to complete cross-border business deals that could have brought future economic activity, something that might not become apparent for months or years.

“The reality is, things are not going to get normal again for a long time,” he said.

“You can’t just throw it back open because the infections will come right back. But on the other hand, you can’t keep it closed forever because there’s so much economic damage being done… The longer you wait, the greater the damage is.”

It would be a lot easier to reopen the border if COVID-19 ceased to be a serious problem, but that’s complicated. Even without a presidential election in a matter of days, a pandemic is an inherently uncertain situation. But an election adds any number of extra variables.

Trump has repeatedly ignored COVID-19 health protocols and, in October, was hospitalized after contracting the novel coronavirus. His campaign hasn’t released an action plan for tackling the virus, but he has promised a vaccine by the end of 2020.

“Don’t be afraid of COVID,” he said in a recent tweet, contradicting advice from infectious disease specialists.

Former vice-president Joe Biden, who is leading in the national polls against Trump, has promised a more stringent approach that includes increased access to personal protective equipment, improved testing, a plan for distributing a vaccine and a task force to address the way COVID-19 disproportionately harms communities of colour.

Though the outcome of the election and the trajectory of COVID-19 are far from certain, a Biden administration that is relying on science and taking action on the virus might make it easier to reopen the border, said Flavio Volpe, president of the Automotive Parts Manufacturers' Association, which represents a multitude of employers in the Windsor region.

COVID-19 is not the only factor affecting cross-border business relationships.

In the past four years under the Trump administration, trade relations between the U.S. and Canada have soured. Trump has started numerous fights over tariffs and has threatened to introduce more if he wins the election.

“We’ve got an incumbent who is likely heading to a loss, although I guess anything is possible. Because his campaign, and him, feel like they’re headed for a loss, they’re heading to the rhetoric that has been fertile for them,” Volpe said.

“A lot of that is protectionist.”

Tariff fights haven’t been good for businesses on either side of the border, Naidu said: “It really just doesn’t benefit anyone.”

However, American businesses are expecting more of them if Trump wins a second term, Baruah said.

Biden, on the other hand, has pledged to repair international relationships: “Rather than picking fights with our allies and undermining respect for America, Biden will work with our closest allies,” his platform reads.

“Businesses would expect a return to normalcy… under a potential Biden administration,” Baruah said. “If Trump is re-elected, we know what we’re going to get, which is a continued level of uncertainty.”

On the Canadian side, businesses are hoping whoever is elected understands how important the U.S.-Canada relationship is, Naidu said.

“We find a way to work with whoever is elected,” he said. “I think they need to have a better understanding of how important it is, not just for us, but for the U.S.”

A Biden administration might come with its own challenges ⁠— the former vice-president has said he would want the U.S. to re-enter the Trans-Pacific Partnership (TPP), which Volpe said could erase some gains for Canadian automakers that came from the new U.S.-Mexico-Canada Agreement (USMCA). But stability could also go a long way, Volpe said.

“(Trump) chooses to play with the Dow while putting children in cages,” he added. “Sometimes these decisions don’t really hinge on business… Peace always pays, and we have none right now.”

The direction the U.S. decides to take could also shape Canada’s transition towards a greener economy, Naidu said. It becomes harder for Canada to take action on climate when the U.S. lags behind, because the extra rules can make it harder for Canadian businesses to compete. But if the next president is willing to work together on green investment, that could make it easier for the Detroit-Windsor area to cash in and “revive our economies,” Naidu said.

Biden’s platform includes plans for green infrastructure, while Trump has questioned the science of climate change.

“If we do the right things at this time, if we jointly embrace the opportunity… there can be business growth,” Naidu said.

“But if we don’t get this right, if we lose the right opportunity, it will come at a cost to us. There will be some other country, some other region, that benefits.”

Regardless of who wins the election and what they decide to do, reopening the border is likely to be complicated.

As COVID-19 stretches on, rapid-testing technology could be used to open the border to more types of traffic, Anderson, of the Cross-Border Institute, said. A vaccine could help, too, though it’s not yet clear how that would be rolled out ⁠— there could be an indeterminate period of time when only part of the population has been vaccinated.

There likely won’t be a grand reopening where everything snaps back to the way it was, Anderson said.

“I don’t think there’s going to be that moment, or that day, where the vaccine is in place and so the prime minister and the president, whoever that happens to be, say, ‘OK, the border can be open again,’” he said.

“I do think over the coming months we can mitigate the economic damage a bit if we have a transition plan.”

The thing is, unlike the EU

The thing is, unlike the EU which just closed it's borders for a 2nd time to Canadians, the border to the US isn't closed. Air travel and now a land port in AB are open to allow in International travellers. There is suppose to be a 14 day quarantine when entering Canada, but is it being strongly adhered to? And now they want to try "fast testing"? It has been shown it does not work properly. The Canadian cases are increasing because of...could it be that we are allowing ourselves to be hit again due to this "border opening"??