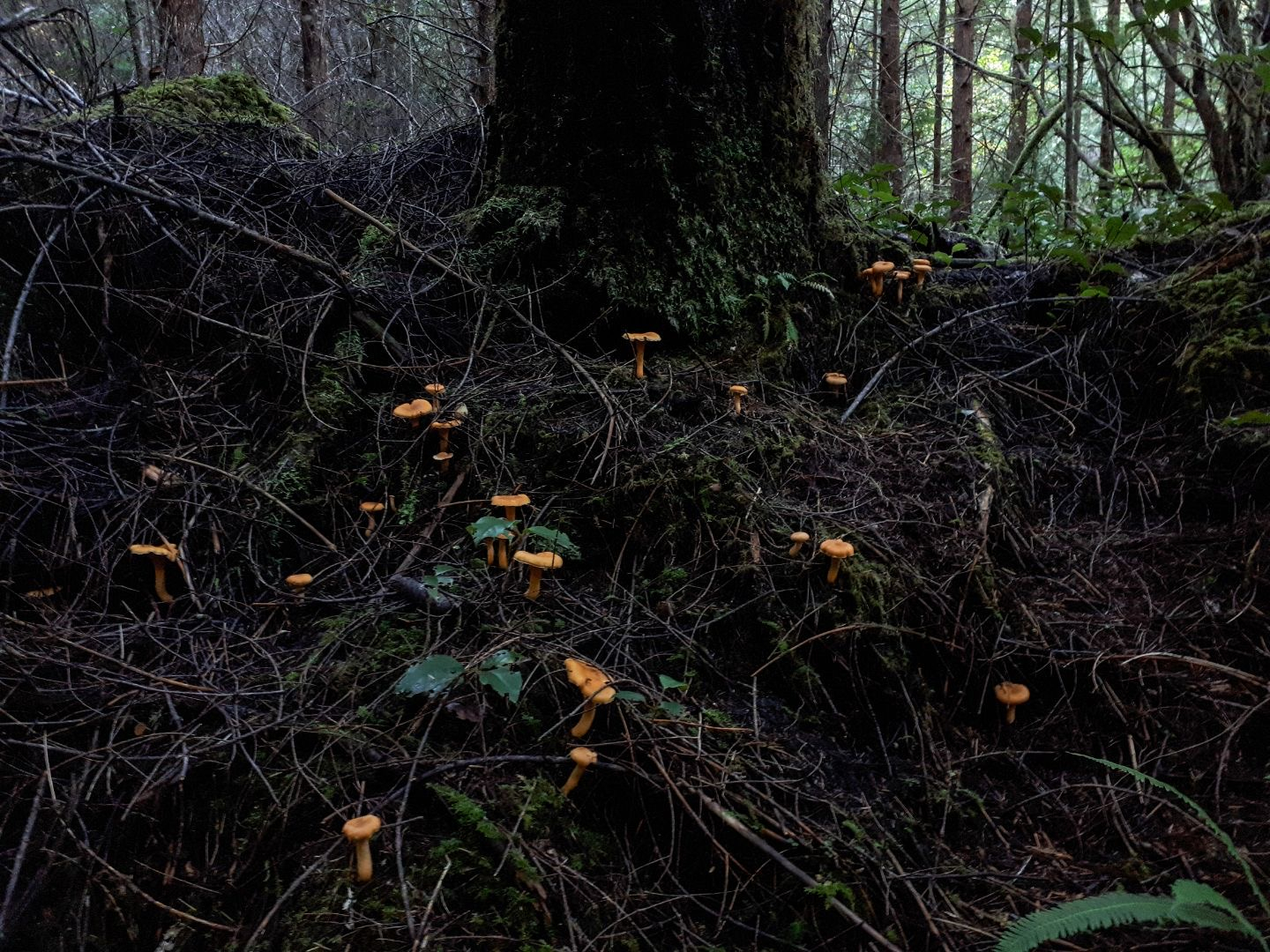 Mushrooms are plentiful in older B.C. forests, many of which are being logged. Photo by Joe Stone
Previous story
Next story

Chanterelles, pine mushrooms, morels: British Columbia's understory is replete with fungi sought by fancy restaurants and foodies worldwide, often for a premium price. That demand has spurred an unregulated industry, one run largely on cash and deals made from the beds of pickup trucks deep in the B.C. backcountry.

“Pickers will go out and pick whatever is flushing at the time and sell it to the field buyers,” said Joe Stone, a professional wild mushroom harvester based in coastal B.C. “(The field buyers) are buying for the big buyers, who are doing the distributing. (They) basically have a monopoly and control the price.”

The provincial government doesn’t track how many mushrooms are harvested in the province, nor how many are exported, making it difficult to get a clear sense of the industry.

A 1997 estimate plugged the global trade in chanterelles — B.C.’s most important commercial mushroom, alongside morels and pine mushrooms (matsutake) — at roughly $2 billion, with production ranging between 150,000 and 200,000 tonnes. More recently, European Union trade data indicated the region imported roughly $3.5 million worth of chanterelles annually from Canada between 1995 and 2005.

Meanwhile, pine mushrooms, which are highly sought in Japan, netted around $20 million per year between 2000 and 2003, according to Japanese government data.

“Most of it goes to export,” said Jeremy Budd, co-owner of West Coast Wild Foods, one the largest wild food companies in the province. That market was severely disrupted this year, as the pandemic shuttered restaurants worldwide, incomes dropped and international flights got scarce. Like many farmers and fish harvesters who relied heavily on international exports to break even, Budd has started selling more mushrooms locally.

Still, that doesn’t mean sales have fully tanked. International markets have remained open, Stone explained, and the prices he’s getting for pine mushrooms (they’re in season now) have more than doubled since last year, reaching $25 a pound.

That might be, in part, because there are far fewer pickers in the bush this year, reducing the overall supply.

“In past years, there’s been a lot of international pickers, especially on fire morels,” Stone said. “If you go into the right area, like the Yukon or the Kootenays, if there’s been a fire there and you go the next year, you’re pretty much guaranteed a good pick.”

“It’s a bit like the Wild West out there, the last of it,” Joe Stone, a commercial wild mushroom picker in B.C., says about the province's wild mushroom and non-timber forest products industry.

That draws people to the B.C. backwoods from across Canada and beyond, with many pickers coming from places like Germany, France or the Czech Republic, according to Stone. And because the industry is almost exclusively cash-based on the ground, many don’t bother with work permits or formal documentation, he said. However, without any form of regulation, it’s pretty much impossible to know for sure.

“Pickers are people we don’t know. If a person has a Czech accent, I don’t ask that person, ‘Hey, where’s your papers?’ We don’t inquire (about their work status),” Budd said. “The workforce are freelancers. That’s how the industry works.”

Furthermore, he said his company is only responsible for buying the mushrooms from “field buyers” — people who travel deep into the backcountry to set up trading stations at mushroom picker camps. They’re responsible for the initial purchase, then they sell to larger brokers like Budd, who take care of distribution and exporting.

“We’re offering a service. When we open a buying depot in a local town in British Columbia, that depot is open for everybody … Everybody is given the same price, it’s all fair, it’s exactly perfect — the way it should be,” he said.

“It’s been left to private cowboy enterprises,” said Shelby Leslie, CEO of Forest Foods Ltd., a non-timber forest resource company that supports First Nations wanting to enter the industry. Companies like Budd’s are technically only brokers for the mushrooms, he explained, which allows them to remain at arm’s length from where their products are picked and who picks them — a distance that isn’t always beneficial.

For instance, intense commercial huckleberry harvests — another major commercial non-timber forest product grown in B.C. — in the Kootenays have been problematic.

“(There’d be) 40 to 50 people in a camp in a valley with lots of huckleberry, and they would just pick it until there was nothing left. That would be in a (First Nation’s) traditional territory, in a grizzly bear habitat,” Leslie said.

That level of harvest infuriated First Nations in the area because the berries are an important traditional food, according to Leslie. It also triggered concerns among provincial wildlife managers for grizzlies in the area, which depend on the berries to get through the winter. Commercial harvesting was prohibited in the area this year to protect the bears’ food — an exception, Leslie explained, to the provincial government’s laissez-faire attitude towards non-timber forest products.

Grizzlies don’t depend on wild mushrooms nearly to the same degree as huckleberries, meaning they’ve been less researched and monitored, and so far, their harvest isn’t controlled. Regulating non-timber forest products — everything from huckleberries to pine mushrooms — is the responsibility of the provincial Ministry of Forest, Lands, Natural Resource Operations and Rural Development.

“They just refuse to do anything about it, and that’s the system that’s been in place forever,” Leslie said.

The ministry was not available for comment during the writ period.

Frustrated with the lack of provincial action, some First Nations, including the Tsilhqot’in Nation and a coalition of Secwépemc communities, have started to require harvesters and field buyers to purchase permits to pick and buy in their traditional territories.

And over-harvesting isn’t the only concern. With only a few companies controlling the distribution of mushrooms, pickers don’t always get a fair price, Stone said.

For example, he has been selling chanterelles for roughly $3 a pound to several companies, including West Coast Wild Foods. A pound of chanterelles on the company’s website is currently $25.

“Pickers are the ones out there doing all the work. They beat up their vehicles … And the field buyers, too, are doing (a lot) of the work buying from the pickers, and they’re not making much more than the pickers. The guys who are holding all the cards are making all the money,” he said.

“The prices, obviously, need to reflect my market conditions … so what you see with the price is simple supply and demand … (We’re) simply buying at a price where (we) can resell at some kind of a (profit) margin, and the margin that we hope for is above our costs all in, which includes the spoilage rate, the travel, the labour,” he said.

Mushroom pickers can always sell to someone else, he pointed out.

“Everybody has the choice because there are no contracts where a mushroom picker has to sell their product.”

However, finding someone else to sell to isn’t always obvious, Stone said, especially because “there’s lots of shady business that goes on to put new buyers out.”

That’s changing, with some new buyers and distributors breaking into the market in recent years. Still, Stone would like to see a bit more oversight to bring the industry into the modern era.

“It’s a bit like the Wild West out there, the last of it,” he said.

Growing up in a small BC

Growing up in a small BC village, our major fruit was berries. All the families picked berries in summer. Saskatoons, strawberries, raspberries ... cranberries, huckleberries, blueberries.
Who then would ever have imagined having to fight over the berries and mushrooms with yet another scheme-ster who'd figured a way to get something for nothing, let alone scheme-sters fighting with each other -- none of them for food they even plan on eating.