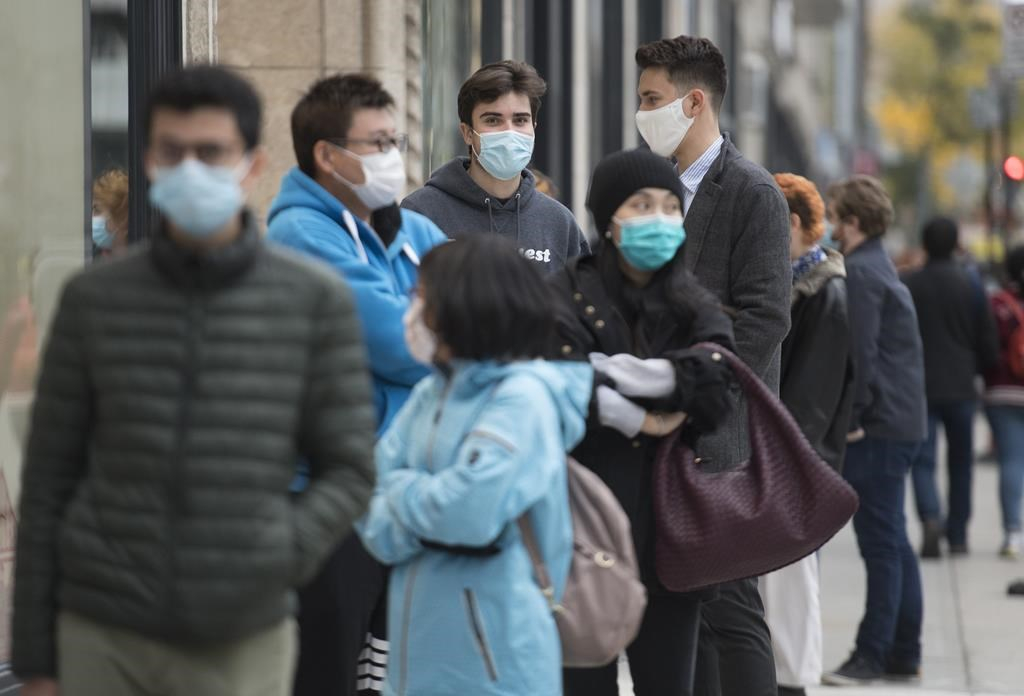 People wear face masks as they wait to enter a store in Montreal on October 24, 2020, as the COVID-19 pandemic continues in Canada and around the world. Photo by The Canadian Press/Graham Hughes
Previous story

The Canadian provinces hardest hit by the global COVID-19 pandemic released sobering numbers on Sunday, with Quebec's overall case count passing the 100,000 mark and Ontario registering more than 1,000 single-day cases for the first time since the start of the worldwide outbreak.

Despite registering comparable daily tallies, the two provinces long at the epicentre of Canada's COVID-19 outbreak appeared to be on opposite trajectories.

Public health experts noted that Quebec's long-standing high case counts appeared to be levelling off, while stressing the week ahead will be crucial to bring Ontario's surging numbers back under control.

Quebec health officials reported 879 new cases, bringing the province's total to 100,114 infections. The province also recorded 11 additional deaths attributed to the virus, for a total of 6,143.

"Comparing the past two weeks, we see that the number of cases is stable, but remains high," Quebec Health Minister Christian Dube said on Twitter, urging people to make an effort to reduce transmission of the virus.

The province's recent COVID-19 numbers are more encouraging than they were last month, however, said Helene Carabin, a professor at Universite de Montreal.

"The population has clearly understood that in order to limit transmission, we have to be more careful," she said in an interview.

"We're going in the right direction, unlike what was the case in September. Now what it tells us is that probably we will continue to have to keep being very careful during the winter months for it not to creep up."

Dr. Theresa Tam, Canada's top public health officer, said in a statement Sunday that a "resurgence" of COVID-19 continues across the country.

Tam said there is a concern that Canada has not yet seen the full impact of the recent increase in COVID-19 cases, as hospitalizations and deaths generally lag behind case numbers.

Quebec's COVID-19 cases leveling off but this week will be crucial to bring Ontario's surging numbers back under control. #COVID-19 #Ontario #Quebec

Manitoba announced 161 new COVID-19 cases on Sunday and the deaths of four people — two of which were related to an outbreak at a Winnipeg long-term care home where 17 people have now died.

Saskatchewan reported 60 new cases, down from its record-high of 78 that was set on Saturday, and no new deaths have been reported since Oct. 11.

In Ontario, which recorded more than 1,000 new cases in a 24-hour period on Sunday for the first time since the pandemic took hold, at least one medical expert voiced concerns about the overall trend of the provincial figures.

Bogoch said that while the cause of the recent spike is not entirely clear, the week ahead will offer a critical window for assessing the province's progress in combatting the pandemic.

"Are we going to start to see a plateau in these numbers, reflective of a successful policy implementation in the hotspots in Ontario," Bogoch asked, referring to major metropolitan regions where the bulk of the province's latest cases have been concentrated.

"Or will we see a continuing growth in the number of new cases per day?"

Both Ontario and Quebec have reimposed restrictions over the past several weeks to try to contain the spread of the virus during the second wave of the pandemic.

Several regions of Quebec, including Montreal and Quebec City, were placed under the highest COVID-19 alert level, which forced the closure of bars and other public venues.

Quebecers in high-risk areas have also been told to avoid seeing anyone who does not live in their household.

In Ontario, Premier Doug Ford has promised to provide an update on Monday on whether the Halton and Durham regions would join Toronto, Peel, Ottawa and York in "modified Stage 2" of the province's economic reopening plan.

Indoor gatherings are limited to 10 people in Stage 2 regions, and gyms, casinos, cinemas and other venues in those areas must also be closed.

Public health officials across Canada have urged people to be extra vigilant during the second wave of the pandemic, as colder weather pushes people indoors.

In her statement, Tam said influenza and other respiratory infections place an added strain on hospitals in the fall and winter months, making it even more important to heed preventative measures.

This report by The Canadian Press was first published Oct. 25, 2020.

--with files from Holly McKenzie-Sutter in Toronto, Rob Drinkwater in Edmonton and Michael MacDonald in Halifax.