By The Canadian Press | News, Politics | November 1st 2020
#943 of 1611 articles from the Special Report: Coronavirus in Canada 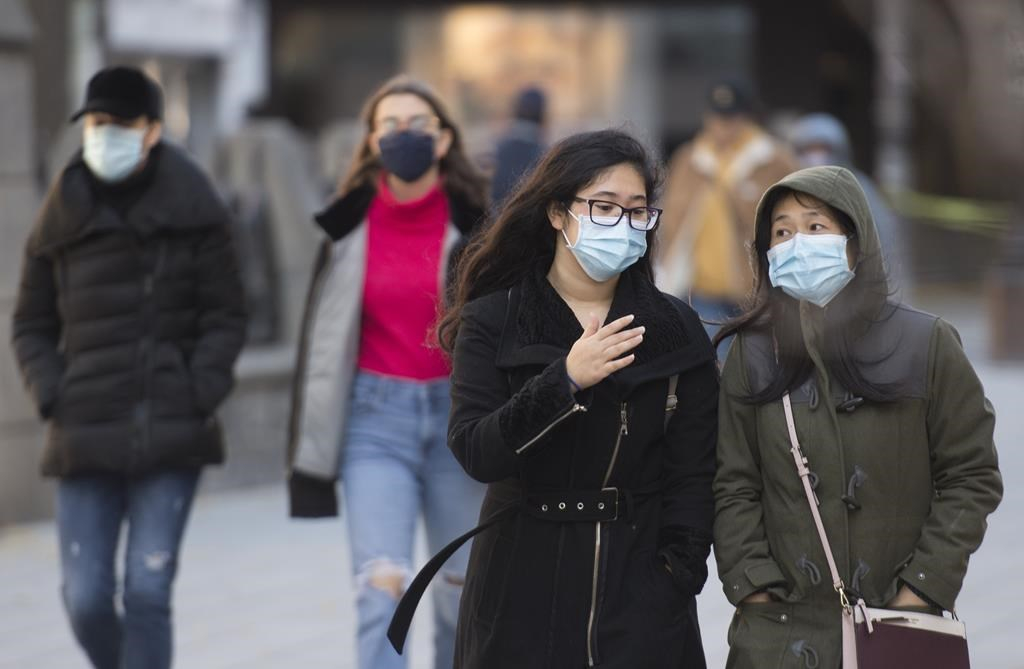 People wear face masks as they walk along a street in Montreal, on Saturday, October 31, 2020. Photo by The Canadian Press/Graham Hughes
Previous story
Next story

Ontario and Quebec are both reporting more than one thousand new COVID-19 cases, while farther west in Manitoba, officials again reported hundreds of new cases as its capital city gets set for tighter restrictions.

Ontario reported 1,015 new cases on Saturday, marking the second time this week the count has surpassed the one-thousand mark.

While Manitoba's new case count was down from the record-smashing 480 on Friday, it's still much higher than the province's previous new-case record of 193 set Thursday.

Starting Monday, bars and restaurants in Winnipeg can open only for pickup or takeout while facilities such as movie theatres, museums and libraries must close.

The measures, along with others, will last two weeks and will be reassessed at that time.

Business in the St. Norbert Hotel bar in Winnipeg on Saturday was "average as it gets through these COVID times," president Gerald Lambert said, although sales at the hotel's beer store were brisk as people appeared to be getting set to drink at home.

"There's other facilities that have far worse reports that are still allowed to be open, albeit at smaller capacity," Lambert said, echoing the frustration many in his industry have expressed at the provincial government.

"In two weeks, I don't know if this is going to make a difference or not."

But Premier Brian Pallister also faced pressure Saturday from others who feel the new restrictions need to go further, with one group placing dozens of cardboard tombstones on the grass median outside his home.

Ontario and Quebec are both reporting more than one thousand new COVID-19 cases, while farther west in Manitoba, officials again reported hundreds of new cases as its capital city gets set for tighter restrictions.

The Halloween-themed protest included epithets on on the tombstones indicating people were dying from Manitoba's reopening plan.

“I respect the right of any Manitobans to peacefully protest and encourage all who choose to do so to do so safely to protect their health and that of others as well,” Pallister said in a statement issued Saturday.

Federal Finance Minister Chrystia Freeland, meanwhile, tweeted Saturday that she'd just gotten a COVID-19 test after receiving an exposure notification from the COVID Alert app and is waiting for the results.

"I am isolating at home while I wait for the results of the test," she wrote. "My thanks to our excellent health care professionals."

The COVID Alert app notifies users when someone who they've been in contact with tests positive for COVID-19.

"Even though this Halloween may look a bit different, I encourage you to follow local public health recommendations on how to have a safe and fun celebration," Tam said in a news release.

This report by The Canadian Press was first published Oct. 31, 2020.