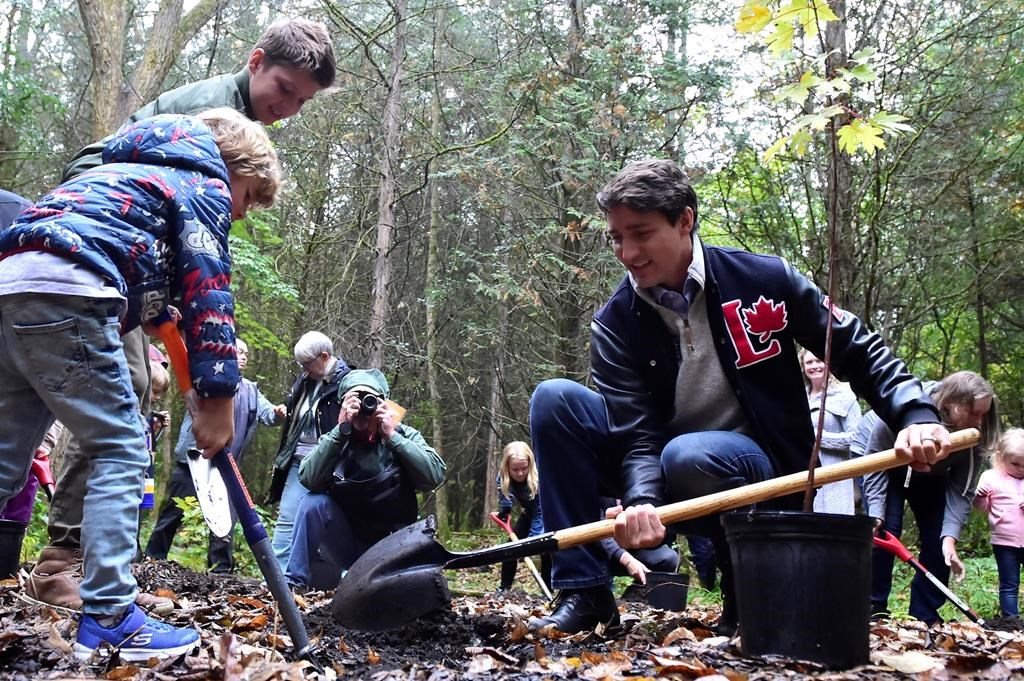 Prime Minister Justin Trudeau's massive tree-planting promise from the 2019 election has yet to be allocated a single dime.

Trudeau pledged a year ago that the government would plant two billion more trees by 2030, or about 200 million extra trees per year. It was to be part of a $3-billion, decade-long effort to manage, conserve and restore forests, grasslands and wetlands, starting with $300 million in 2020-21.

It was clear last month that no trees had been planted this year, a failure Natural Resources Minister Seamus O'Regan's staff chalked up to the COVID-19 pandemic. Now it has become clear the program was never given any money.

"We are awaiting a budget decision," said Beth MacNeil, assistant deputy minister of the Canadian Forest Service, before the House of Commons' natural-resources committee on Oct. 30.

"But in the meantime we do continue, myself and my team, since late last fall to engage with potential partners."

NDP environment critic Laurel Collins agreed with Harder that the Liberals have constantly promised to take action on climate change but the follow-through has been abysmal.

Collins said the fact the tree promise didn't even have a budget yet is "kind of shocking."

Typically about 600 million trees are already planted each year in Canada, and the pledge for two billion more over a decade was to be on top of that. Over 10 years, that would have meant about 33 million more trees a month during tree-planting season. Over the nine years left, the government will have to plant at least 37 million more a month.

Prime Minister Justin Trudeau's massive tree-planting promise from the 2019 election has yet to be allocated a single dime. #trudeau #cdnpoli #Liberals

In mid-June, O'Regan said he was hoping the summer would be "one of the most ambitious" tree-planting seasons Canada had ever seen but was trying to figure out how to help tree-planting companies facing increased costs to keep workers safe in the era of COVID-19.

"It's setting up to be and will be a good down payment on our commitment to two billion (trees)." he said in an interview June 15.

"I'm very happy to report that with the added money that was available, not a single tree planter actually contracted COVID," MacNeil said Friday. "So the extra measures that we took — extra vehicles, extra dining halls, right along the whole tree-planting value chain, the protection of communities that these tree-planters went into — was a success, and all 600 million trees got planted this year."

He did not explain why there hasn't been a budget allocated yet, but said the government is finalizing the program's design, including where the trees will be planted, what kind of trees they will be, and how they will be monitored to see how many survive.

Forests can be large carbon sinks, absorbing millions of tonnes of carbon dioxide, keeping it from trapping more heat in our atmosphere. However when trees die, they emit the carbon dioxide they stored.

For more than a decade Canada's forests have been a net contributor to global warming, emitting more carbon than they are absorbing.

The Forest Products Association of Canada last winter outlined for the government some of the challenges inherent in fulfilling its tree-planting pledge, including the pressures on nurseries to grow millions more seedlings for planting — seedlings can take one to four years to mature.

As well, FPAC warned there are regular struggles to find workers able and willing to do work that is physically demanding, mostly seasonal and often without benefits.

By Jackie Flynn Mogensen | News, Politics | February 23rd 2020
Reports from the Race to a Safer World

By Mia Rabson | News, Politics | December 17th 2019
Reports from the Race to a Safer World

Trees are essential to our

Trees are essential to our survival. Trees take a long time to grow to maturity and start contributing oxygen and storing carbon. Worldwide, humans are reducing forest.

One can only despair at the tokenism of 2 billion trees for a crisis problem, with none planted and no plan to locate and nurture them.

Guess they'll indulge in the

Guess they'll indulge in the tried and true method of rolling out this climate and Spring, summer, Fall jobs project in time just before an election.

Planting trees is a laudable

Planting trees is a laudable exercise , but if it's all one species of trees like spruce etc.(read; pulp and paper mills) then it's cynicism at it's worst. pretending to do the environment good when ,all the while , planting an industrial tree, i.e. softwoods. A natural forest contains hundreds of trees and other shrubs,forbs and grasses.Nothin' grows under a solid stand of softwoods and few animals find it an environment conducive to life.