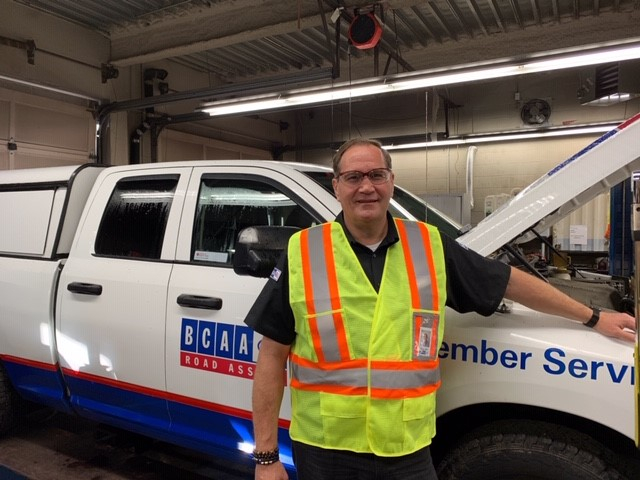 Klaus Uebelacker in front of a truck from BCAA, where he works as a trainer for the road assistance fleet. Photo courtesy of Klaus Uebelacker
Previous story

The German-born, Maple Ridge, B.C., resident has spent his career fiddling around with cars. Uebelacker, 53, worked as a Mercedes-Benz mechanic for more than 20 years before moving to his current line of work, training roadside assistance providers at BCAA, while also teaching in Kwantlen Polytechnic University’s automotive program.

He believes there are few trained professionals currently in the business who can confidently open the hood of an electric vehicle (EV) and know what they’re getting themselves into. That’s a problem in Canada in 2020, he says — one that’s only going to get worse if it isn’t addressed soon.

“Electric cars are coming fast, and we need to be prepared. The automotive industry, in my mind, is not prepared for it,” said Uebelacker in an interview. “Everybody is scared. Seriously, everybody is scared. They don’t understand the system.”

It was Uebelacker’s own thirst for knowledge that drove him to enrol in the British Columbia Institute of Technology (BCIT) EV maintenance training program, which he completed earlier this year, right before the pandemic hit.

The program was “the only place where they actually touch electric cars and do training on them,” Uebelacker said. “You take the parts out, you actually look inside, they show you how to activate it, how to take the battery out. You actually take a complete battery apart, physically look at it, and say, ‘Oh, that’s what happens.’”

BCIT’s program was launched with support from CleanBC, the provincial climate plan. Mubasher Faruki, associate dean of automotive, told Canada’s National Observer last month that demand is growing for technicians to be trained to work on EVs. The Green Budget Coalition has recommended that the federal government provide $10 million for a nationwide automotive technician training program for zero-emission vehicles.

Uebelacker called that a “no-brainer” and said he would “absolutely recommend” EV training for mechanics. “I think in every apprenticeship, that should be almost mandatory,” he said. “Coming out of the automotive industry, and being an instructor in a university, I really recommend it.”

He wanted the new skill set in particular because of the training he does at BCAA, he said. Uebelacker trains BCAA’s fleet of roadside service providers on things such as how to tow cars, boost them to get them going or change tires. He also travels across B.C. to meet with other companies hired under the umbrella of BCAA to train them as well.

It is important that tow operators understand how EVs work, so they can handle them without getting shocked or electrocuted by the car’s high-voltage system, he said. The procedure to check an EV’s components is completely different from that of a gas-powered vehicle.

This information is also useful for organizations focused on health and safety such as WorksafeBC or even fire departments, Uebelacker said.

Klaus Uebelacker, a mechanic with decades of experience, thinks many in his profession are afraid of electric cars. "The automotive industry, in my mind, is not prepared for it...everybody is scared. They don’t understand the system.” #EVs

A self-described EV geek, Uebelacker says he was first inspired by the General Motors EV1, an electric vehicle produced in the late 1990s. Cars with no tailpipe emissions, that don’t cloud cities with pollution and threaten people’s health are clearly the future of automotive technology, he said.

In B.C., they are increasingly present on the road, with provincial sales requirements demanding a percentage of sales to be zero-emission models. While EVs only represent about three per cent of national vehicle sales so far, that may change if the federal government follows through on its promise to make EVs more “affordable.”

But the bottom line, said Uebelacker, is that, as a mechanic, EVs appeal to him the most because of their simplicity. In a regular car, “you have so many things that turn, that are spinning, making noises, using oil, using gas, using spark,” he said.

In an EV, however, “there’s nothing to it — just an electric motor and a little bit of brains.”