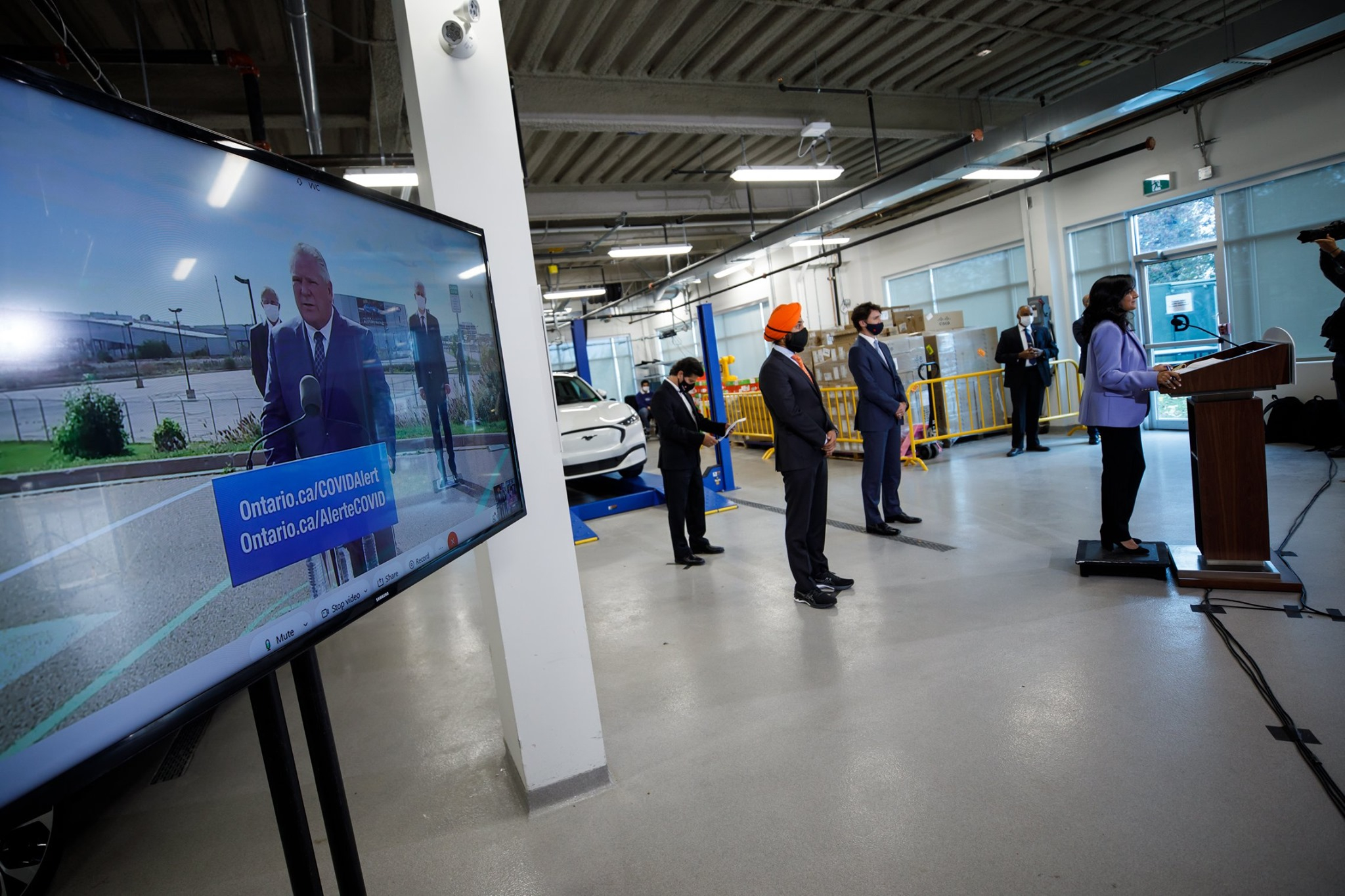 Wilkinson’s comments come as Canada’s independent Parliamentary Budget Office released estimates Thursday on how much the federal carbon tax would need to rise to meet the nation’s Paris Agreement target in the absence of any other new measures that would cut pollution.

Parliamentary budget officer Yves Giroux’s new analysis said the carbon tax would need to rise to between $117 per tonne and $289 per tonne by 2030, depending on whether the government would apply such a tax broadly across almost all industries or cap it for big emitters.

This price range would be sufficient to close the 77-megatonne (Mt) gap that is not accounted for between Canada’s Paris target and current measures that have been announced, said Giroux.

Giroux noted the report does not assess the merits of carbon pricing versus other approaches.

“We’re not getting into a debate as to whether a carbon tax or regulations are the best instruments — we leave that to those who are in the political arena, or policy wonks,” he said.

Federal parties have been promoting a broader approach to tackling Canada’s carbon pollution than just using a carbon tax.

The Liberal government’s strategy, for example, has been a mix of carbon pricing and other measures, such as regulating coal-fired power plants and methane leaks from oil and gas facilities and investing in electric-vehicle infrastructure to encourage the decarbonization of the transport sector.

On Thursday, Wilkinson pointed to Prime Minister Justin Trudeau's and Ontario Premier Doug Ford’s announcement of $295 million each to help repurpose an assembly plant in Oakville, Ont., for battery-electric vehicle production as a climate-fighting move.

Speaking during question period, the minister named energy efficiency and renewable energy as two elements of an “effective climate plan” that would aim to “reduce emissions in all sectors across the country.”

“Certainly, the announcement today by the prime minister and Premier Ford with respect to zero-emission vehicle manufacturing is a critical piece of that plan as well,” he said.

Canada’s emissions gap is due to the fact that current government projections, which include measures such as the clean fuel standard and the fuel charge, show that emissions will decline to 588 Mt in 2030.

But the Paris target requires the country to cut carbon pollution 30 per cent below 2005 levels by 2030, which translates to a level of 511 Mt, or 77 Mt below projections.

Giroux's report also does not account for the escalating economic and environmental costs of the climate crisis or compare the cost of a rising carbon tax to the cost of doing nothing. Giroux said his office didn’t have the resources necessary to crunch the numbers.

“The staff here is very good, outstanding, but they’re economists,” he said. “To assess the costs of doing nothing, you need a broad team of climatologists and economists, and it’s not something that’s widely done.”

Wilkinson has previously said he is confident Canada will close the emissions gap by 2030 and even “exceed” Canada’s Paris target. Wilkinson’s mandate letter says the minister is expected to introduce “new greenhouse gas reducing measures.”

Other federal parties have different ideas for what those measures might be.

Green party Leader Annamie Paul has proposed that Canada implement a carbon border adjustment that would put a carbon price on certain imports from countries that have “weak emission reduction policies and practices” or policies that are below a minimum threshold.

In an interview Wednesday, Paul said the border adjustment would be “one of the most extraordinary opportunities for Canada to really punch above its weight, and to show true global leadership on getting other countries to set a strong, nationally determined contribution target and actually meet them.”

Paul also wants to see Canada adopt a target of 60 per cent fewer emissions than 2005 levels by 2030, in line with scientific calculations. The Intergovernmental Panel on Climate Change has said global carbon pollution needs to drop by almost half from where it was a decade ago in order to avoid more extreme consequences of climate change.

Paul's idea is interesting, but it seems to me she's putting the cart before the horse somewhat. We're one of the worst emitters on the planet; shouldn't we actually do something about that before having the gall to put tariffs on other people for their emissions?

This is a step in the right

This is a step in the right direction, but only a baby step.

The expected large-scale displacement of the internal combustion engine (ICE) in cars with electric motors will cause a measurable decline in oil demand in the domestic economy, but that still leaves the troubling embedded carbon imprint of oil exports, namely diluted bitumen where 60% of the total carbon produced is burned outside of Canada (source: Natural Resources Canada). Nonetheless, a steep decline in producing and consuming fossil fuels is the correct path for Canada, and the resulting job losses must be counterbalanced with new jobs, assistance and training for other careers.

That leaves the carbon imprint of the manufacture of EVs, notably the processing of raw materials. Steel making even today is egregiously carbon-intensive, and Chinese steel -- which is the source supply of the majority of this metal -- is no exception. There are new technologies approaching that use electrolysis to make steel alloys using clean electricity, a process that eliminates metallurgical coal and limestone altogether, which transforms the emission profile of steel dramatically to the low end. Electric arc furnaces aren't new, but they are outcompeted on the cost of energy compared to coal. But they do exist and are capable of melting scrap metal and processing it into usable forms, like rebar, using zero emission electricity. Aluminum made in BC is not possible without relatively low emission hydroelectricity. Canada could lead the West to adopt low emission steel and make it at home for domestic projects as part of a climate transition program, creating thousands of jobs and internal economic multipliers to balance the higher costs compared to cheap, carbon-intensive imports that create jobs overseas.

However, when accounting for the carbon footprint of car making as part of the much larger calculation of fighting climate change, one should bear in mind that the operational carbon output of ICE cars is orders of magnitude higher than EVs over the life of the car. Therefore, EVs are a good thing by comparison for those who drive a lot. The higher list cost is usually made up in a few years by savings in fuel and maintenance; an electric motor is very simple and has few moving parts by comparison to an engine with 2,000 parts.

But to urbanists like me, EVs are an interesting diversion that may help decrease a fair amount of urban emissions, but they are still cars that take up far too many resources with their necessary support infrastructure. Road networks consume a massive amount of the increasingly valuable land in cities. Bridges and elevated freeways are terribly expensive and inefficient when the movement of vital goods and services (e.g. food and buses) are stuck in congestion created when 70% of the traffic consists of single-occupant cars, EV or no EV. In that light, personal cars are grossly inefficient when compared to public transit and urban design and zoning that fosters walkable neighbourhoods where homes, jobs, schools and stores are close.

When commuting is necessary, the data supports the fact that a fast, frequent subway service (in pre- and no doubt eventually in post-pandemic times) can move the same number of people as, say, a 10-lane freeway. Dedicated tram and bus corridors are similarly efficient and much cheaper than car ownership, all be it a bit slower and less frequent in mixed traffic.

A call to urbanize the suburbs with high-capacity rail and attractive surface transit and to build walkable, poly-zoned communities where malls surrounded by acres of open parking now stand, should comprise several chapters of National Climate Transition Plan. Those chapters will be far longer, more detailed, promote significantly more funding and dovetail with further chapters on a national clean energy strategy and so forth, than a chapter on EVs.