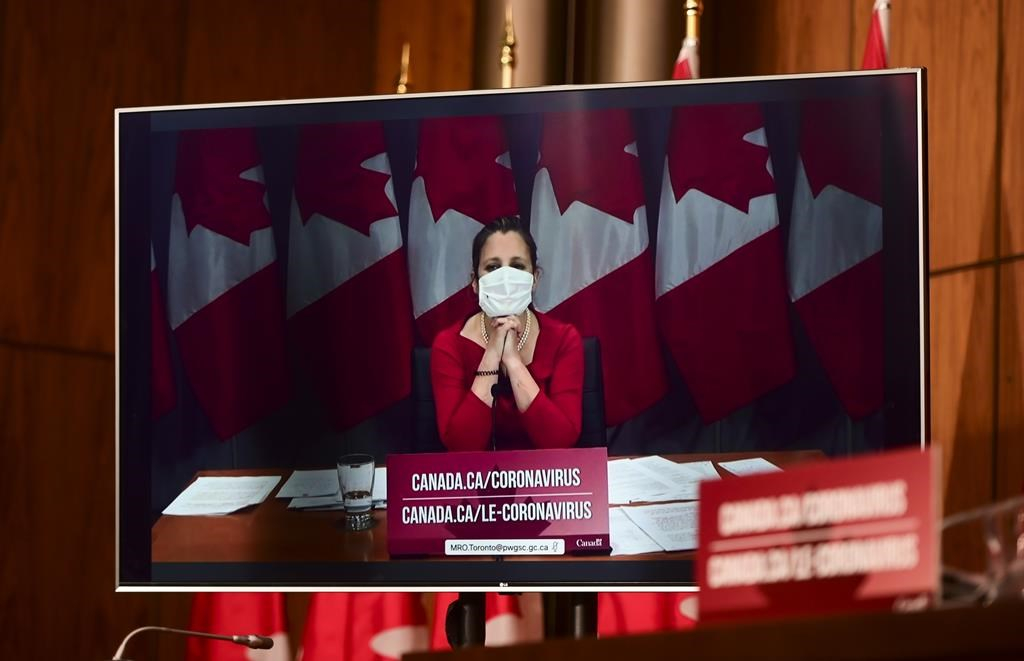 Minister of Finance Chrystia Freeland takes part via video conference as an update is provided during the COVID pandemic in Ottawa on Tuesday, Nov. 3, 2020. Photo by The Canadian Press/Sean Kilpatrick
Previous story
Next story

Canada's diplomats were on standby to help Canadians living south of the border if turmoil erupts in the United States after a polarizing presidential election.

Deputy Prime Minister Chrystia Freeland said Tuesday the government considers it a responsibility to be there for Canadian citizens, and is prepared to help them.

"Our federal government is absolutely ready. We have thoughtfully prepared for all eventualities," she said.

What they said they feel is anxious, sad, and scared.

In the polarized American political environment, which saw clashes between demonstrators and police in many cities earlier this year, the election results could potentially lead to civil unrest.

Across the U.S., photos surfaced of mainstreet shops boarding up their windows in possible preparation for the worst.

Daneet Brill, who grew up in Quebec and now lives in Connecticut, said she has family in Brooklyn, N.Y., prepared to flee their home and come to hers.

"That is not something that I ever thought would be a conversation I'd be having living in the United States," Brill said.

But she said while the threat of violence is concerning, so too is the political polarization of the country.

Brill said she used to take pride in her Canadian approach of being tolerant and respectful of everyone's political views but struggles with those who continue to support Republican Donald Trump and what it means for the future of her adopted country.

Canada's diplomats were on standby to help Canadians living south of the border if turmoil erupts in the United States after a polarizing presidential election.

"Whether it's a Republican or Democrat president, it's never caused me any anxiety before but now it does."

Still, she's unlikely to uproot her family and head back to Canada, she said, though her mother has joked the basement is ready.

"I don't feel like I want to give up on living in the United States," she said.

"There could be great things that happen in this country."

Christian Lander, a Torontonian now living in Los Angeles, said he isn't sure the country can ever go back to some kind of "normal."

Even if Trump loses, he's left in his wake a society where conspiracy theories overrule facts, and any attempt to correct the record are spun as a coverup, Lander said.

"The lack of faith in any sort of facts, history or any sort of precedent is just gone," he said.

The divisions the Trump presidency have created will be difficult to heal, Lander said.

Trump isn't interested in reaching out to those who don't support him, and those who do are fuelled by an anger that Lander called the "last gasp of American white supremacy."

"There's nothing the Democrats could have said that would have changed it," he said.

There are an estimated 800,000 Canadians living in the U.S., among them numerous actors and athletes who have, to varying degrees, engaged in the election.

Earlier this week, hockey great Bobby Orr endorsed Trump in a full-page newspaper ad, a move that had some critics suggesting athletes should stay out of politics.

Actor Seth Rogen, who is from Vancouver but is a dual citizen, was among the dozens of celebrities leading get-out-the-vote efforts in recent days, including a video posted online urging citizens to cast their ballot.

One impact of the last four years of Trump administration has been a decline in the number of Canadians moving to the U.S.

Research from the Association for Canadian Studies shows that since 2016, there's been a 25 per cent drop in emigration to the U.S. from Canada.

What should Canada do now?