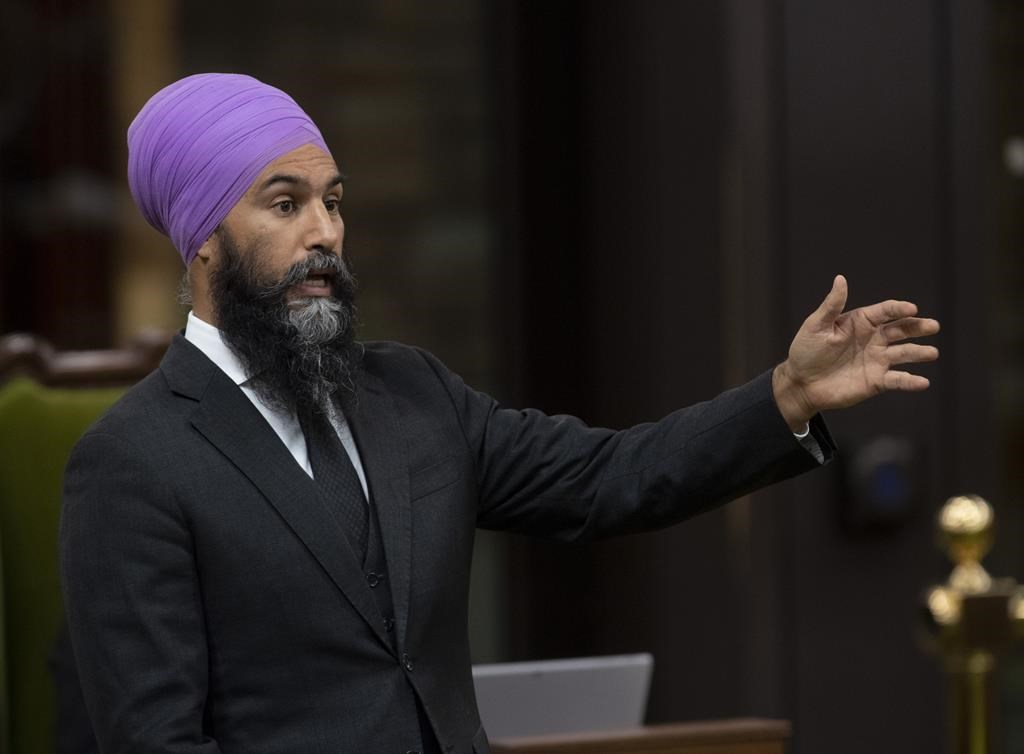 NDP Leader Jagmeet Singh rises during question period in the House of Commons on Thursday, Oct. 22, 2020 in Ottawa. File photo by The Canadian Press/Adrian Wyld
Previous story
Next story

The federal New Democrats will use an upcoming chance to set the agenda in the House of Commons to push for a new tax on wealthy people and those who made massive profits during the COVID-19 pandemic, their leader Jagmeet Singh says.

Speaking to reporters in Ottawa, Singh said people are worried about the cost of the pandemic because they don't want to carry the burden of increasing public debt.

"They're saying we can't afford to make any more sacrifices, we've already sacrificed so much."

He says those who have fortunes of over $20 million and those who have profited from the pandemic need to pay their fair share to fund health care and housing programs and to provide Canadians a guaranteed livable income.

The wealth tax was part of the NDP platform in 2019 federal election.

The NDP will propose the new tax on its first "opposition day" of the new session of Parliament on Thursday.

Singh says Liberal and Conservatives governments have both cut programs that support the most vulnerable, which left Canadians unprepared for the pandemic.

He says his proposed wealth tax and a tax on excess profits would give the government new revenue to invest in social programs that will help Canada recover.

"It should not be you that has to pay for it. It should not be families and people and workers and small businesses who've struggled," he said. "It should be the ultra wealthy that contribute their fair share."

In July, NDP finance critic Peter Julian asked the PBO to estimate how much revenue would come from a one per cent tax on families with net wealth of over $20 million.

"That's a massive new revenue (source) that we could get from people that could afford to do so," Singh said. "The excess profit (tax) has the potential to have massive revenue implications, which is also not something to be ignored."

All assets and liabilities were included in the net wealth tax base in the PBO report, except wealth won in lotteries.

The new tax would also cost about $113 million to administer, according to the PBO report.

Singh said people who are struggling have been let down by a system that has been designed and built by Liberals and Conservatives to exclude them.

"There are people that are winning. The ultra rich continue to make massive profits. They profited off this pandemic," he said. "To do something about that we have to tax the wealthiest."

He said billionaires and large corporations including Amazon, Walmart, Netflix and Facebook have made massive profits during the pandemic and they must pay more tax.

"The way forward is not to cut the help that people need, not to put the burden on working-class families," he said. "It should be on the massive wealthy corporations and Canadians that are the ultra rich."

He said the government has to act on individuals and corporations that are using loopholes in the tax system to make money in Canada then hide it in offshore tax heavens to avoid paying taxes here.

By Lee Berthiaume | News, Politics | May 26th 2020
Coronavirus in Canada