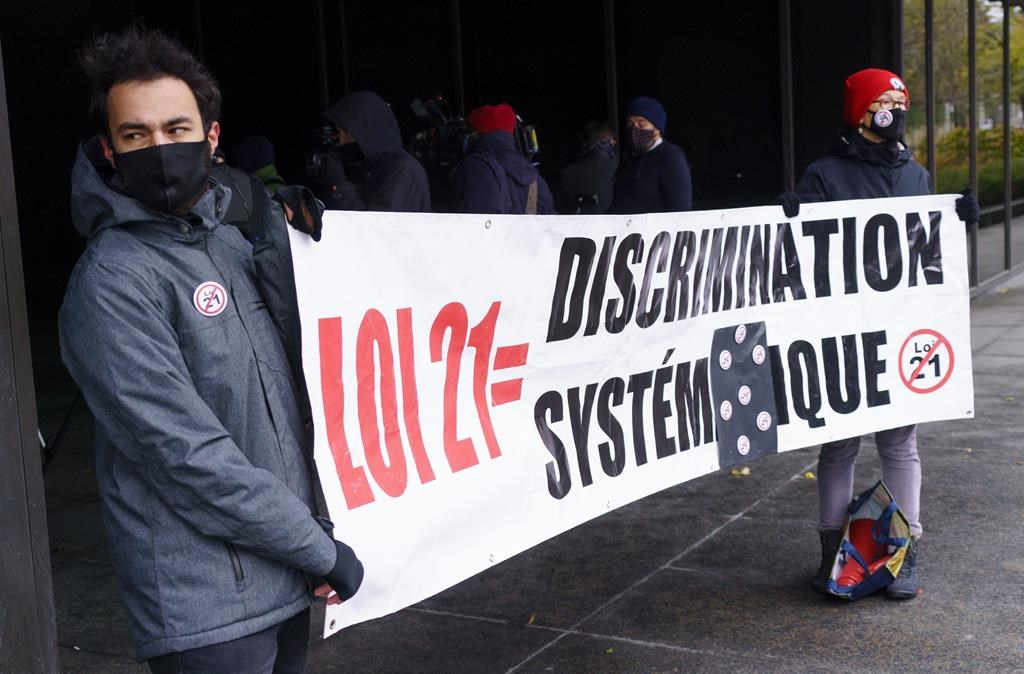 Demonstrators stand outside the courthouse on the first day of the constitutional challenge to Bill 21 before the Quebec Superior Court in Montreal on Monday, November 2, 2020. Photo by The Canadian Press/Paul Chiasson
Previous story
Next story

Another Muslim teacher took the stand at the court challenge to Quebec's secularism law on Tuesday, testifying that her hijab has no impact on her ability to teach.

“I do not see any conflict between my faith and the way I teach,” Bouchera Chelbi testified on Day 2 of the legal proceedings against Bill 21, the law that bans public sector workers in positions of authority -- including teachers and judges -- from wearing religious symbols on the job.

Chelbi, who has taught English as a second language in Montreal for 12 years, told the court she has always acted professionally and treated her students equally regardless of race, religion or sexual orientation.

"I never experienced any discord because of my head scarf," she said.

She said that in all her years of teaching, the only uncomfortable moment came when a lesbian parent of one of her students was ill at ease with her. However Chelbi said the issue was quickly resolved after a meeting to discuss the child's progress.

She is allowed to teach in a hijab because she was hired before the law was introduced in 2019, but she said the law would apply to her if she wanted to change jobs.

"It's a door closing," she said, referring to the possibility of career advancement.

Questioned about a woman's sworn statement that her daughter had been pressured by a teacher to wear the hijab, Chelbi said such actions are wrong.

"The head scarf cannot be imposed," she said. "It's up to parents to teach their children according to their own beliefs." She said her hijab has never prevented her from feeling free but rather has given her a sense of being "more complete."

The hearings in Montreal combine four separate lawsuits challenging Bill 21 into one trial, which is expected to last up to six weeks before Superior Court Justice Marc-Andre Blanchard.

Another Muslim teacher tells Bill 21 trial that her hijab has no impact on her ability to teach. #bill21 #cdnlaw #quebecpoli

On Monday, the trial opened with testimony from two Muslim teachers and one Sikh teacher, all of whom described feeling excluded from Quebec society because they choose to wear religious symbols.

Bill 21 makes pre-emptive use of the Charter of Rights and Freedoms notwithstanding clause, which shields legislation from court challenges over violations of fundamental rights.

In Quebec City Tuesday, Justice Minister Simon Jolin-Barrette said the government is prepared to defend its secularism law before all courts.

"It is up to the elected members representing the Quebec nation to choose how the relationship between the state and religions applies," he told reporters.